Destruction of Saddam-era monument in Iraq is put on hold 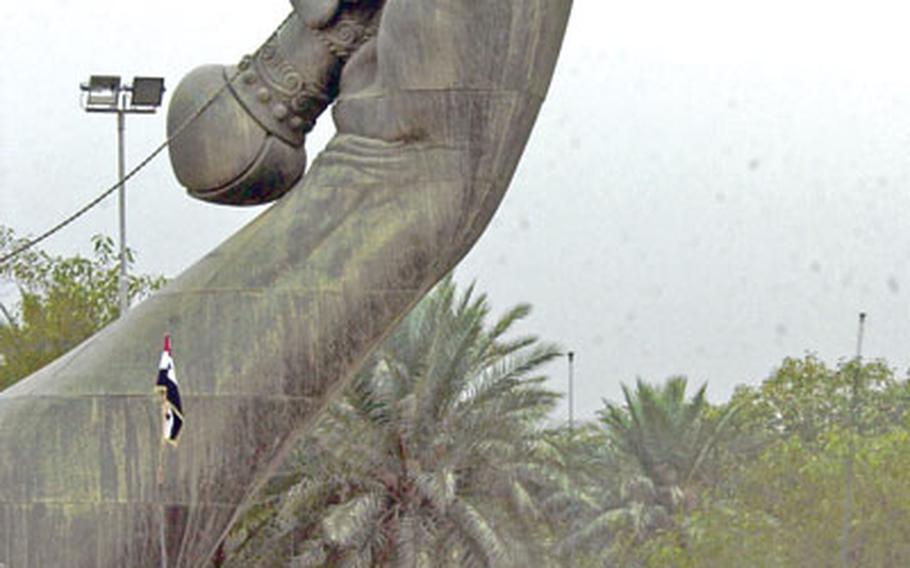 American and Iraqi officials have intervened to temporarily halt the destruction of one of Baghdad&#8217;s most famous Saddam-era monuments.

But many Iraqi and American officials feared the dismantling of the monument could further deepen the rift between Iraq&#8217;s Shiite majority and its Sunni minority, whom Saddam favored during his rule. Maliki&#8217;s government is Shiite-led and elements of it have been accused of complicity with Shiite death squads.

According to the Times, Mustafa al-Kadhimiy, a Shiite and director of the Iraq Memory Foundation, pleaded with a deputy prime minister to save the monument as a reminder of Saddam&#8217;s rule and the country&#8217;s past.

The deputy prime minister then asked several powerful people, including then-U.S. ambassador Zalmay Khalilzad, to intervene with Maliki. The destruction was halted shortly after, though no long-term promise has been made to leave the monument standing.

Since the fall of Baghdad in 2003, the edifice has become a major tourist attraction of sorts in the Green Zone. Thousands of coalition troops, embassy workers, contractors and other Green Zone denizens have stopped by to take pictures &#8212; some climbing up a narrow ladder and poking their torso from a hollow area of a fist.

There are actually two sets of hands and crossed swords reaching 140 feet high, flanking the entrance to a parade ground.

The 24-ton swords were supposedly made from the melted-down and recast guns of dead Iraqi soldiers, and some 5,000 captured Iranian helmets adorn various parts of the monument. The hands that hold the swords reportedly are direct replicas of Saddam&#8217;s own hands, and the German firm that built the monument has said the arms were modeled from a photograph provided of Saddam&#8217;s forearms.

On the day the monument was inaugurated in 1990, Saddam rode under the hands astride a white horse, an allusion to the slain Shiite martyr Hussein, killed in Karbala in A.D. 680. The martyr Hussein&#8217;s death caused the rift between Shiite and Sunni Muslims.