An Italian AV-8B Harrier II jet vertically takes off from the deck of the Italian aircraft carrier Giuseppe Garibaldi Friday, about 40 miles off the coast of Sardinia, Italy. (Sandra Jontz / S&S)

An Italian AV-8B Harrier II jet vertically takes off from the deck of the Italian aircraft carrier Giuseppe Garibaldi Friday, about 40 miles off the coast of Sardinia, Italy. (Sandra Jontz / S&S) 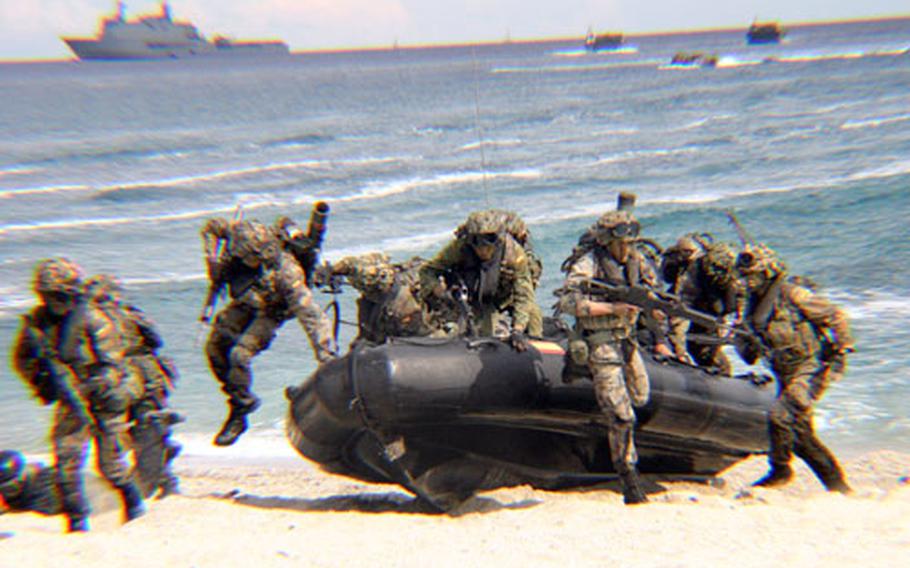 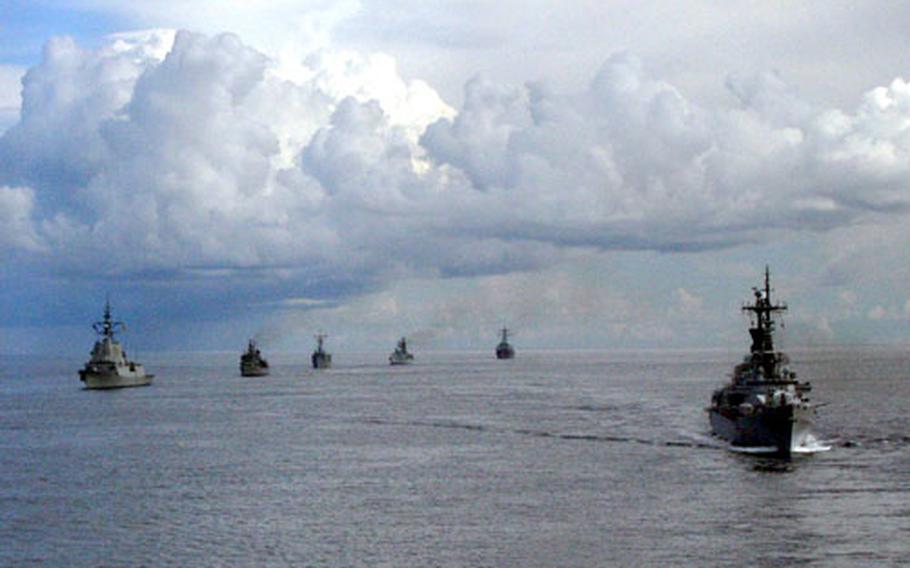 ABOARD THE GIUSEPPE GARIBALIDI &#8212; The flag patches worn on their left shoulders denote the countries they call home. But when they&#8217;re storming some beach in a war-torn country, it doesn&#8217;t matter if the troops who make up NATO&#8217;s Response Force teams are American, Italian, or Spanish.

That&#8217;s the concept, at least. And for roughly two weeks, forces from 10 NATO nations are putting that concept to the test.

Some 8,500 personnel, 38 ships and 60 aircraft are taking part in Destined Glory (Loyal Midas) 2005, a sea-, air- and land-based NATO exercise to test communication skills between vessels, compatibility of multinational troops, and how the militaries should work with news media representatives.

The two-week exercise is taking place in the Mediterranean Sea off the Italian island of Sardinia.

The exercise, NATO&#8217;s largest this year, serves primarily as the certification stage for the Italian navy, which holds command of the NRF&#8217;s maritime component until June, U.S. Vice Adm. J. &#8220;Boomer&#8221; Stufflebeem said during a Friday news conference at Capo San Lorenzo in Sardinia. Stufflebeem assumed command of the NRF this summer.

The response force was created in 2002 to provide NATO with quick-response land, air and sea forces capable of deploying within five days, and up to a month, without resupplying.

From a leadership standpoint, these exercises give commanders a chance to plan extensive operations and choreograph missions, said Italian Lt. Cmdr. Marco Maccaroni. For the troops who are tapped to be on-the-ready for six-month cycles, the exercise gives them the opportunity to hone skills, from medical and casualty evacuation scenarios to rappelling from helicopters, he said. More importantly, Maccaroni said, they learn to do it not as a Spanish sailor or Turkish soldier, but as a united response force.

The need to work together is not lost on the troops.

No one likes to be asked to push aside their national allegiance, but when it comes to a mission, troops think of the job at hand, getting it done and coming home alive and healthy, said Italian Petty Officer 3rd Class Manuela Mesto, 25, a navigator onboard the aircraft carrier Giuseppe Garibaldi.

The troops&#8217; mission over the next week will be to quell the eruption of violence in a fictitious country. In the scenario, tension has erupted between geopolitical warring factions in Beech Land in the north and Oakland in south. Residents have endured genocide, terrorism and war.

The exercise also includes 17 journalists who make up the &#8220;simulated press,&#8221; some of whom are embedded on two of the vessels, and some who work independently, Irish journalist Laoise Hayes said in an interview at the press headquarters at Italian Elmas Air Base in Cagliari, Sardinia.

&#8220;We try to simulate as close as possible what the press reaction would be to the scenario and test how the military would deal with the media,&#8221; Hayes said.

While the Garibaldi serves as the flagship, top leaders are watching the exercise from aboard the command-and-control vessel, USS Mount Whitney.

The nations participating in the training are Belgium, France, Germany, Greece, Italy, the Netherlands, Spain, Turkey, United Kingdom and the U.S.

NATO exercise to be renamed

NATO exercise Destined Glory will get a new name next year.

The maritime exercise, which has been held under the name Destined Glory since the mid-1990s, will be called Loyal Midas under a new system in which military commands name exercises.

For 2005, the exercise is being called by its dual name of Destined Glory (Loyal Midas) 2005, bridging the old and the new.

Under new NATO rules, exercises must consist of two words to identify the location of the commanding element, and the general mission type, such as air-, land-, or sea-based.

Exercise names now must contain the first letter of the location and the mission. This NATO exercise is led by Joint Command Lisbon and is a maritime exercise &#8212; hence the name Loyal Midas.