Despite upgrades, training, Baumholder's future still up in the air Smith Barracks, a U.S. Army installation that dwarfs the German town that hosts it, has seen the number of troops based here fall by roughly a half in the last two years. With plenty of empty space and one of the largest military training sites in Germany next door, the local mayor says it's the perfect place for the U.S. to base additional troops. (Matt Millham/Stars and Stripes)

Smith Barracks, a U.S. Army installation that dwarfs the German town that hosts it, has seen the number of troops based here fall by roughly a half in the last two years. With plenty of empty space and one of the largest military training sites in Germany next door, the local mayor says it's the perfect place for the U.S. to base additional troops. (Matt Millham/Stars and Stripes) A squad of U.S. Soldiers from the 10th Special Forces Group practice fast roping from a CV-22 B Osprey tilt rotoraircraft at the Army Airfield, Baumholder Military Training Area, Germany, April 24, 2014. The event was the first time the U.S. Army has used Ospreys for training in Baumholder. (Erich Backes/U.S. Army) 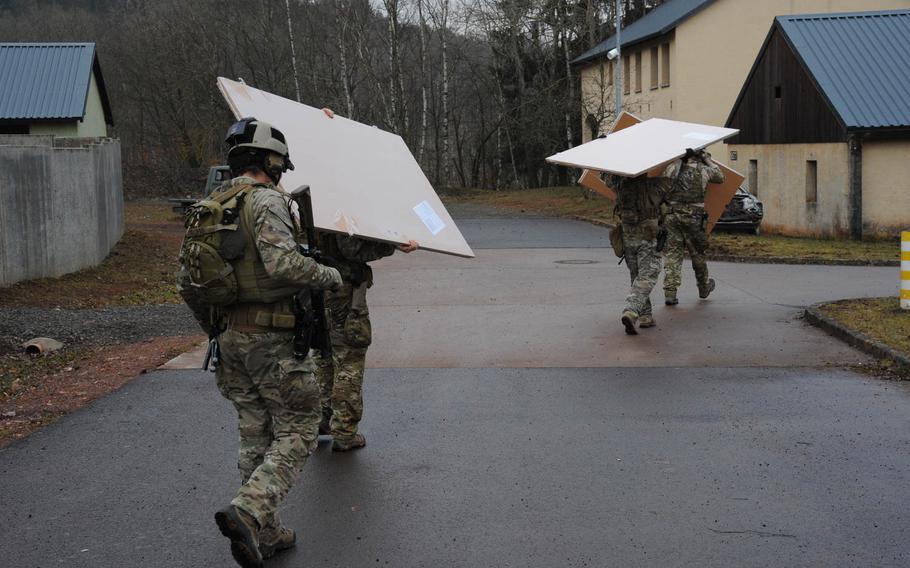 BAUMHOLDER, Germany — As mayor of this garrison town, Peter Lang would like to know the U.S. Army’s long-term plans for its sprawling base here. As a former lieutenant colonel in the German army, he also knows those answers don’t always exist.

But while the Army has remained largely silent on its plans for Baumholder pending the outcome of an overarching review of U.S. military infrastructure in Europe, its actions give Lang reason to believe that things may be looking up for the town, whose fortunes are closely tied to the Army presence.

Despite fewer troops, the Army is moving forward with plans to upgrade housing, roads and other infrastructure here. In April, U.S. Special Forces came to the post to conduct training with MV-22 Osprey aircraft for the first time ever, adding fuel to long-simmering speculation over the Army’s interest in basing Green Berets here.

Even more intriguing, though, is the Army’s decision over the summer to defer previously announced job cuts while the Pentagon carries out its European Infrastructure Consolidation Review — a move that would enable the Army to quickly move more soldiers here without having to rehire civilians who take care of many of the day-to-day functions of Army installations.

“For sure, everybody is waiting for any result” of the infrastructure review, Lang said.

The Pentagon did not respond to questions about when the review might be released.

The Army announced the job cuts in February as part of a Europe-wide rebalancing that affected nearly 600 local-national positions, roughly 160 of them in Baumholder. The cuts, according to U.S. Army Europe, were necessary to adjust the size of the civilian workforce in response to previous troop reductions.

While some of the announced plans affecting Baumholder have already been implemented — the transformation of Baumholder from a full U.S. Army garrison to a satellite of the Kaiserslautern-centric U.S. Army Garrison Rheinland-Pfalz — the job cuts have been deferred for up to a year, pending the outcome of the infrastructure review, Troy Darr, a command spokesman, said.

“This course of action has not been implemented at any other Army garrisons or satellite sites in Europe,” he said.

Baumholder, which until 2012 housed the 170th Infantry Brigade, is one of U.S. Army Europe’s largest installations, dwarfing the German town that hosts it. Since the inactivation of the 170th, many of the garrison’s buildings have been renovated but sit empty. In its version of the annual defense authorization bill, the House has voted to extend the use-by date on nearly $60 million previously authorized to build a new elementary school here.

“The capacity is there. The infrastructure is also there,” for more soldiers to move in, Lang said. “Training opportunities on the military training area is also available.”

A 31,000-acre military training area adjacent to the base is the third-largest such facility in Germany, allowing forces to fire tanks and other large weaponry. U.S. and NATO Special Forces used the training facilities in September for a major exercise that involved about 1,500 troops here and at other installations in Germany.

Lang said his administration and the Army have talked about the possibility of having German utilities provide water and heat to the base. Baumholder already takes care of the base’s wastewater, he said.

But that decision is also being held up by the infrastructure review, he said. A company that has proposed building a biomass plant to heat the garrison and some municipal buildings won’t move forward with the plan without a firm commitment from the U.S., Lang said.

While Baumholder’s economy has stabilized since the previous round of troop cuts forced some businesses to close, Lang said his constituents would like to see more Americans in the streets, because with them comes prosperity. After dealing with this ambiguity for years, though, they’ve learned to be patient.