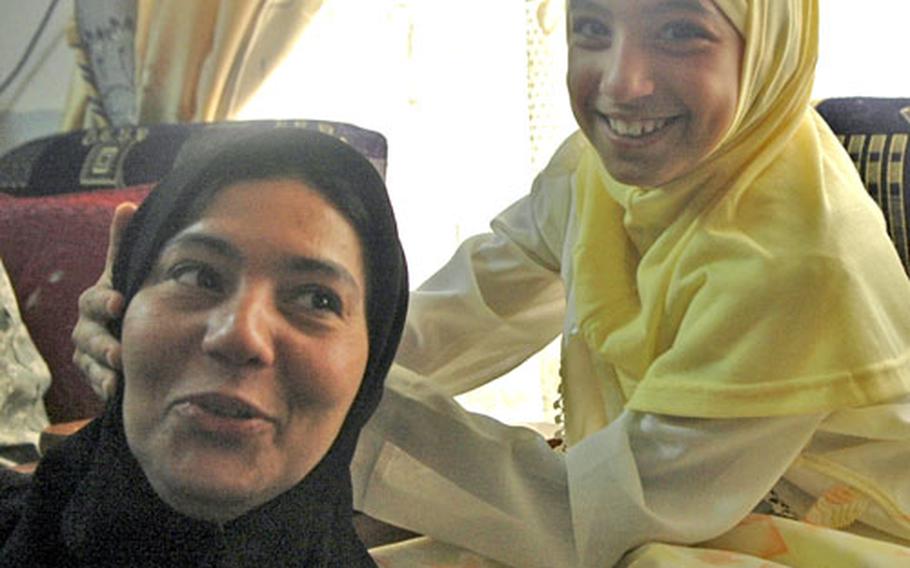 Menar Abd Al-Matalab said she hopes, through her efforts on the Balad City Council, to create a better life for her daughter, 9-year-old Imana. (Anita Powell / S&S)

BALAD, Iraq &#8212; In the last year, she&#8217;s seen two of her brothers, both of them Iraqi Army soldiers, killed by insurgent groups. A surviving brother, also a soldier, has a $60,000 bounty on his head for killing nine insurgents. She, too, is marked for death by an extremist group for cooperating with American soldiers.

But for 39-year-old Menar Abd Al-Matalab, out of despair, comes hope.

Once a week, the rail-thin mother of four dons her black chador and goes to the Balad City Council building, where, as the only woman on the council, she vigorously, vociferously argues for women&#8217;s rights, improved security and an end to the corruption and infighting that has hindered the city&#8217;s progress.

Her hope is that one day women in Iraq will have more rights than they do now, that all children will have a safe and secure future, and that &#8212; inshallah (God-willing) &#8212; the decades-long cycle of violence will end.

Balad, an entirely Shiite city inauspiciously located inside the Sunni triangle, suffered a rash of sectarian killings under the orders of Saddam Hussein. Today, tribes fight against other tribes for power and influence, causing violence between families.

She said she risks her life to fulfill an obligation to her family, to secure their financial state and their future.

To that end, she&#8217;s lobbied hard to build a women&#8217;s resource center in the city, a project that has gained support from the city council but has yet to be acted upon.

American soldiers who meet regularly with Menar say they&#8217;re impressed by her drive and courage.

&#8220;I think she&#8217;s a very impressive person,&#8221; said Lt. Col. Jeff Martindale, commander of 1st Battalion, 8th Regiment, 4th Infantry Division of Fort Carson, Colo. &#8220;If everyone in Iraq were like her, this country would be well on its way to democracy and freedom. Through her personal courage, action and taking responsibility to make her city better, she&#8217;s had a big impact.&#8221;

She views her fate with almost shocking bleakness.