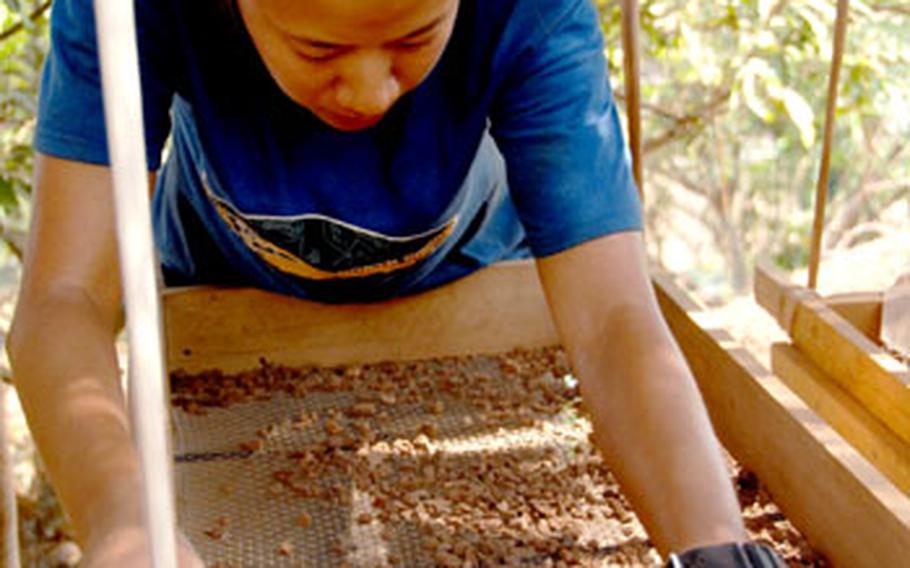 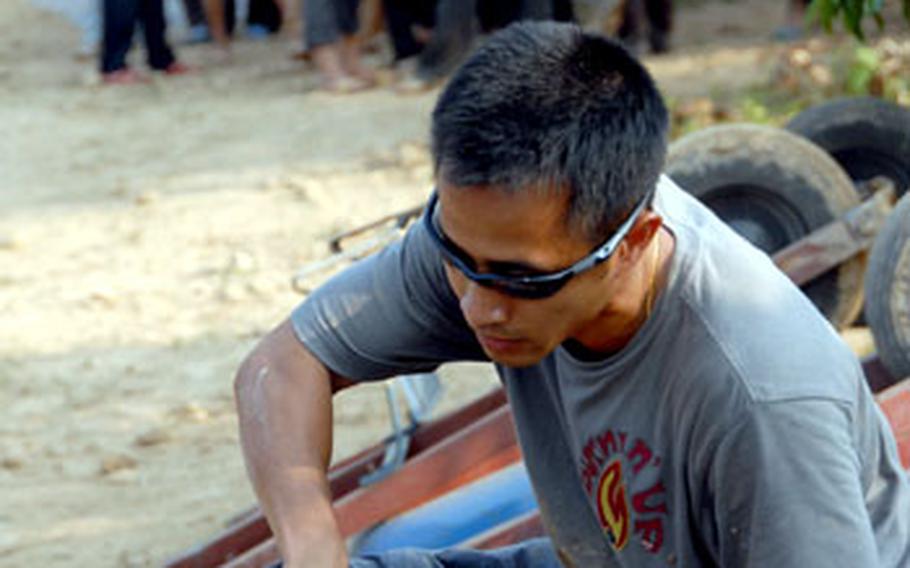 Sgt. Tuan Pham, a Vietnamese-American linguist with JPAC, scrapes clay off his boots at the end of a day of work. A group of Vietnamese workers stands in the background. (Ashley Rowland / S&S)

LANG SON PROVINCE, Vietnam &#8212; They have the same slight build, skin tone and black hair as the Vietnamese, and even speak the same language.

But to the villagers in this dusty hamlet, accessible by a rutted red dirt road, two U.S. military translators are an oddity &#8212; Vietnamese, yet not.

&#8220;To these people, you look Vietnamese, so you&#8217;ll always have Vietnam in your heart. If you&#8217;re not white, you&#8217;re not really American,&#8221; said Sgt. Lihn Bui, an American-born translator with the Joint POW/MIA Accounting Command, the military organization that searches for missing troops.

Bui, along with Sgt. Tuan Pham, is responsible for translating for the 17 Americans and 90 Vietnamese who work at a JPAC excavation deep in rural Lang Son province &#8212; no easy job at a site that includes two digging and sifting stations spread over a hilly area that can take 30 minutes to cover by foot.

&#8220;It&#8217;s tough,&#8221; said Pham, who left Vietnam for California with his mother and brothers when he was 11. His father, a former South Vietnamese soldier, escaped to a Thai refugee camp when his son was 2 years old. Until they reunited in California, Pham knew his father only from pictures.

The translators have much in common: Both of their families left Saigon, now Ho Chi Minh City, after the war in hopes of starting better lives in California. Both grew up speaking Vietnamese at home and English in school. And both say working with JPAC in Vietnam has given them a chance to see the country their families emigrated from &#8212; something neither planned to do on their own.

Pham, now 30 and on his third JPAC mission to Vietnam, said coming back to Vietnam has given him a chance to learn about the country&#8217;s culture. For instance, he asked some of the village women working at the dig site why they wore business-card sized pieces of black fabric on their shirts. They told him it was part of a 100-day period of mourning for a dead relative.

He doesn&#8217;t think about the war or the fact that he&#8217;s in North Vietnam, home to the communist forces his father fought during the war.

Pham said his father is happy his son has returned to Vietnam with the U.S. military.

Pham and Bui speak a southern Vietnamese dialect &#8212; different in accent, and some words are different from the dialect of the north. Neither knows the local language, which they say the villagers switch to when they don&#8217;t want the translators to know what they&#8217;re saying.

The Vietnamese workers sometimes talk about how big the Americans are. But they&#8217;re polite and not resentful that the translators live in America.

&#8220;They&#8217;re just really curious about a Vietnamese that lives in the States and then comes back over here. They just want to know anything and everything about you,&#8221; said Bui, whose parents moved to the United States in 1975, several years before she was born.

They also chide her for not knowing as much of the language as they think she should, and her parents for not teaching her more. Even though she spent several hours a week learning to read and write Vietnamese in Sunday school, she forgot some of the language when she went to college.

Pham said the villagers who are being paid to work for JPAC as guards, bucket and wheelbarrow carriers, and sifters have welcomed the U.S. team.