Despite the relative calm of Rawah, Marines continue foot patrols with Iraqi police 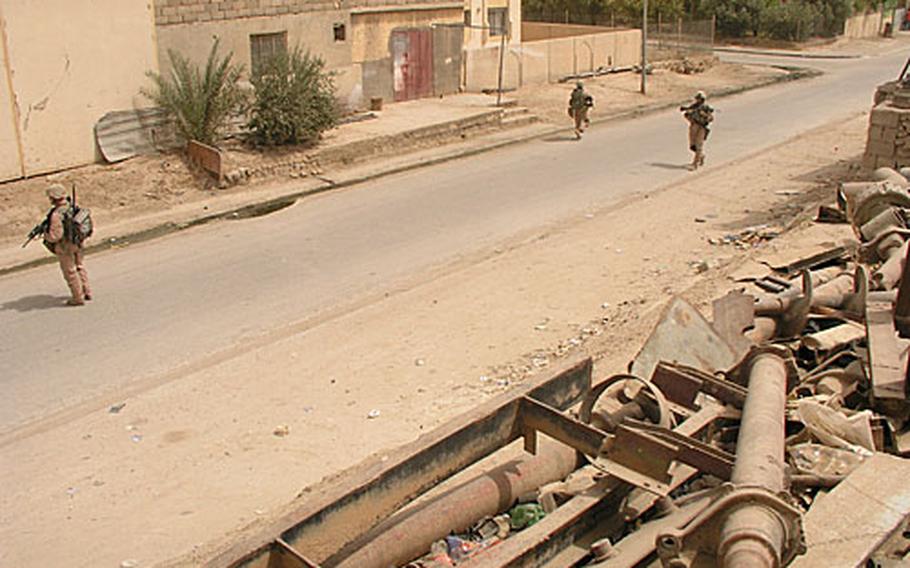 During a routine patrol earlier this month in Iraqâ€™s western Anbar province, Marines of 3rd Platoon, Company D, 1st Light Armored Reconnaissance Battalion, make their way through the streets of Rawah, a city on the Euphrates River. (Franklin Fisher / S&S)

During a routine patrol earlier this month in Iraqâ€™s western Anbar province, Marines of 3rd Platoon, Company D, 1st Light Armored Reconnaissance Battalion, make their way through the streets of Rawah, a city on the Euphrates River. (Franklin Fisher / S&S) 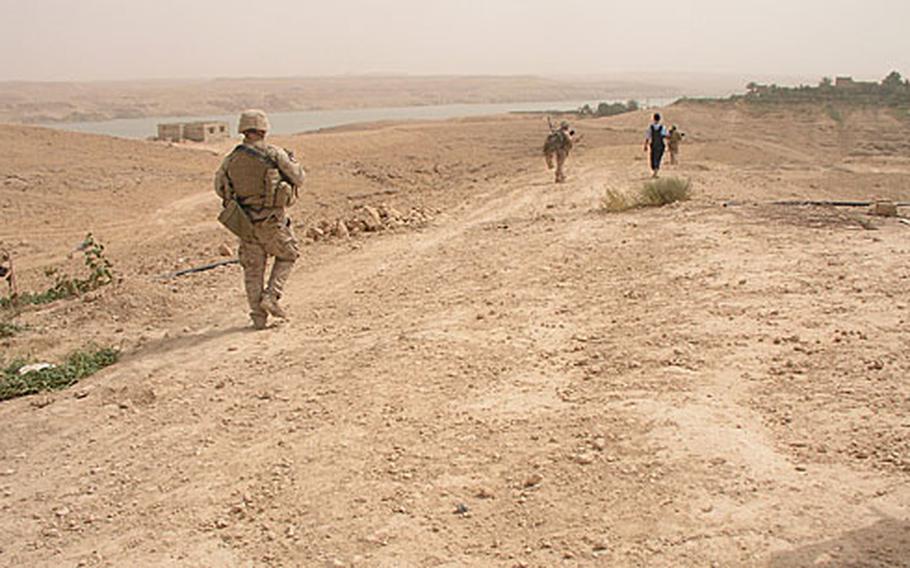 Marines of 3rd Platoon, Company D, 1st Light Armored Reconnaissance Battalion, come within sight of the Euphrates River while on routine patrol out of a base in Rawah. (Franklin Fisher / S&S) Marines accompanied by officers of the Iraqi Police, stop at a house in Rawah to ask its occupants whether theyâ€™ve seen signs of any insurgent activity. (Franklin Fisher / S&S) Marines make their way up a steep hill in the area of Rawah. (Franklin Fisher / S&S) 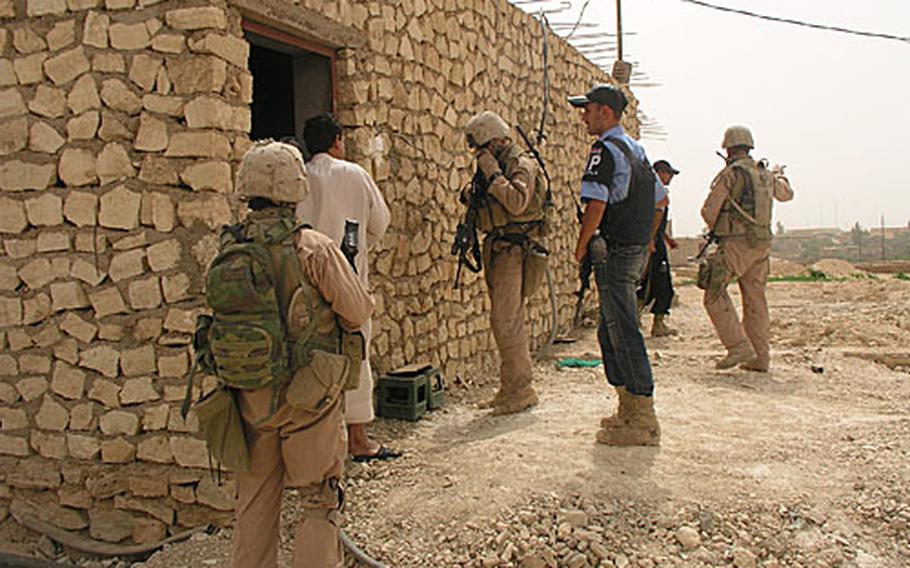 RAWAH, Iraq &#8212; The plump Iraqi woman in the white headscarf was outside hanging the wash when she spotted the Marine foot patrol making their way up the street on another hot, dusty afternoon in Rawah.

Minutes earlier, six Marines and two blue-clad Iraqi police officers had left a patrol base in Rawah, a city on the Euphrates River in western Anbar province.

The aim is mainly to detect insurgent activity, remind the insurgents they are ready and able to engage them, and make local residents, such as the woman hanging the wash, feel safer.

For these Marines, such patrols have become a staple of the counterinsurgency role U.S. forces find themselves in at this stage of the Iraq conflict, where the populace is seen as the &#8220;center of gravity.&#8221;

Wiese was not on this patrol. Its leader was Pfc. Bryan Gregory, 22, of Bagdad, Ariz.

The woman watched the Marines a moment, then quickly went inside.

The Marines continued on and soon were no longer on paved streets but in a wide-open, sun-baked tract where numerous houses of stone or cinder block were in various stages of completion. And minutes beyond that, not a quarter-mile to their left, was the pale gray ribbon of the Euphrates.

Up ahead was a two-story house made of stones and mortar.

They knocked, and a man opened the door. He wore a white, gown-like dishdasha and sandals, had a mustache and curly black hair and was smoking a cigarette. He did not seem at all alarmed at the sight of the patrol, and when the Iraqi police said they&#8217;d like to look around inside, he showed no resentment.

Immediately the man held his hands out in the negative, and told them in Arabic that no, he hasn&#8217;t seen anything suspicious going on.

Within four minutes of knocking, the patrol was thanking him and saying goodbye.

The patrol was now in what had turned into steeply rolling country, the river on their left, while far out to the right was a vista of houses and palm trees, part of residential Rawah.

They were now climbing a very steep slope. A house under construction was at the top, and Gregory saw two people.

When the patrol reached them neither showed fear. One looked in his 20s and had a black-and-white checked scarf on his head. The other was in his teens and the older one told the patrol the two were brothers.

Through the Iraqi police, Gregory asked if anyone else was inside. No one, the older one answered.

Meanwhile, another Marine spoke to the older Iraqi in English. They exchanged names.

Finding nothing, the patrol said goodbye and moved on.

In their operating area, Task Force Highlander Marines say, the populace has grown largely supportive in recent months, and insurgent attacks in the cities have dropped off sharply.

But for Gregory and other task force Marines, that in itself poses a risk.