Despite the heat, a fast-paced tour of Saigon for Humphrey 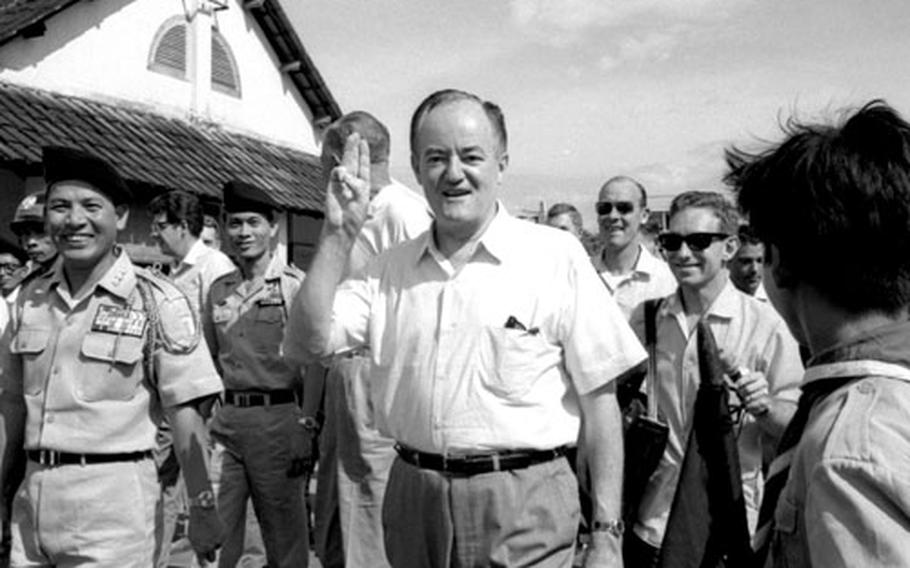 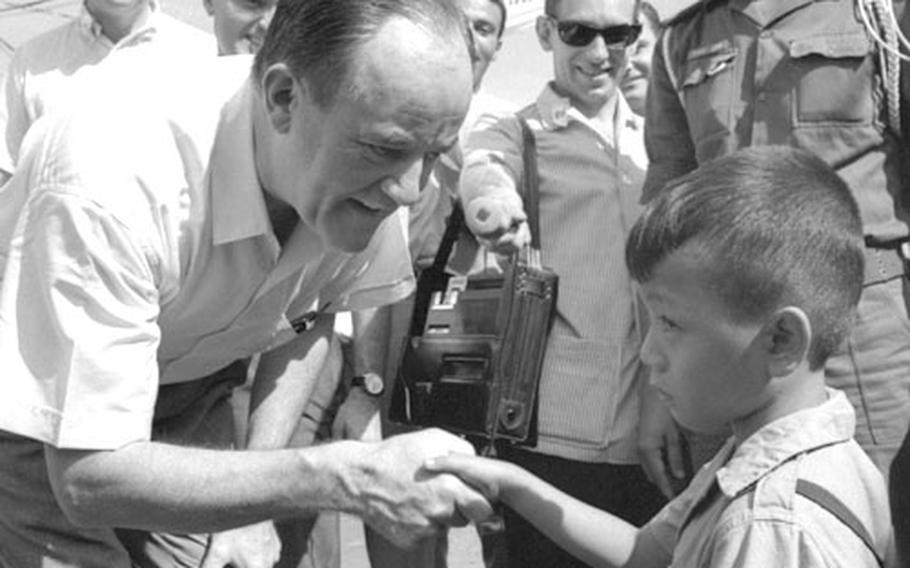 SAIGON &mdash; Vice President Hubert H. Humphrey was to spend Saturday with the troops in the field as his Vietnam visit nears its end.

The vice president stressed the non-military features of his visit by spending Friday touring Vietnamese installations ranging from a relocation center to an agricultural school.

Despite the steam-bath heat, Humphrey appeared tireless as he inspected everything front a kindergarten to an artificial insemination station.

"Lovely children &mdash; look at this young man-give me the Boy Scout handshake &mdash; how do you say hello to a beautiful young girl in Vietnamese &mdash; this is a challenging and inspiring project ..."

Friday morning Humphrey and Prime Minister Nguyen Cao Ky started the day with an official visit and later moved on to tour a relocation center at Tam Pha, five miles south of Saigon, where some 10,000 people are now housed.

The visitors, who included ambassador at large W. Averell Harriman and American Ambassador Henry Cabot Lodge, were treated to some unique honors &mdash; a musical salute from a band made up of drums, cymbals and wooden sticks manned by boys under 10.

Named "New Prosperity," the center is a collection of homes, school, market place and other facilities where people can rent a home for about $2 a month and own it within 10 years.

Humphrey and Ky managed to seat themselves in chairs made for youngsters of considerably smaller dimensions at the kindergarten and joined the youngsters in counting "one-two three" in Vietnamese.

After leaving the housing area Humphrey visited a market and purchased a small bottle of perfume from one booth. He had to borrow Vietnamese money from a reporter to make the purchase &mdash; 30 cents.

Next the group moved to a suburb of Saigon in the Eighth District where the people have worked with their hands to change the area from an old graveyard and a swamp into a housing district.

The program began when a group of university students decided to move into the area and try to improve it. At the time people were living in shacks between the graves, and the filth was deplorable.

The students cleared up the area, removed the bones of the dead, washed them, and reburied them in another cemetery with full religious honors, and then went to work getting sand dredged out of a river nearby to fill in the area.

"This is the solid type of achievement that can be accomplished now," Lodge added. "I was here when they started only seven months ago and you can't believe it is the same place today."

The U.S. aid program is supplying materials for the homes, but the people are doing the work. Humphrey promised to provide them with a TV set for their community hall as an additional gift from the U.S.

After lunch Humphrey, Lodge and Harriman inspected the national police headquarters, where they paid tribute to the men who have suffered heavy losses in the fighting with the VC.

At the headquarters is an orphanage school for the children left homeless by deaths among the policemen. Col. Pham Van Lieu, commander, escorted the visitors on the tour of the installation and the orphanage.

Next was the Tan Son Nhut agricultural station where the visitors saw baby chicks sent over under the U.S. aid program.

Ex-pharmacist Humphrey took over the microscope in the laboratory and questioned the staff at great length.

The final stop of the afternoon was at the International Voluntary Services Center &mdash; the program similar to the Peace Corps being conducted in Vietnam.

He chatted with young schoolteachers, such as Miss Sandra Williams, of El Paso, who are working throughout Vietnam in various cities to serve the needs of the people.

Humphrey and his group are scheduled to leave Saigon Sunday to continue the tour of Southeast Asia.