Despite strike, some in Naples find a way to shop 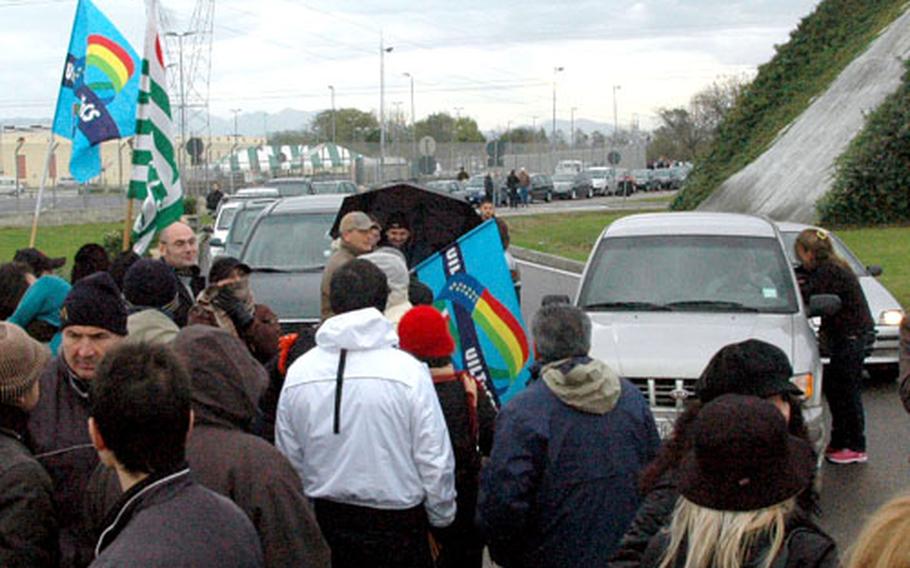 Italian employees block the entrance and exit at the U.S. Navy’s support site base in Gricignano on Friday, causing drivers to park along the street outside the base and walk in. (Sandra Jontz / S&S)

Italian employees block the entrance and exit at the U.S. Navy’s support site base in Gricignano on Friday, causing drivers to park along the street outside the base and walk in. (Sandra Jontz / S&S) 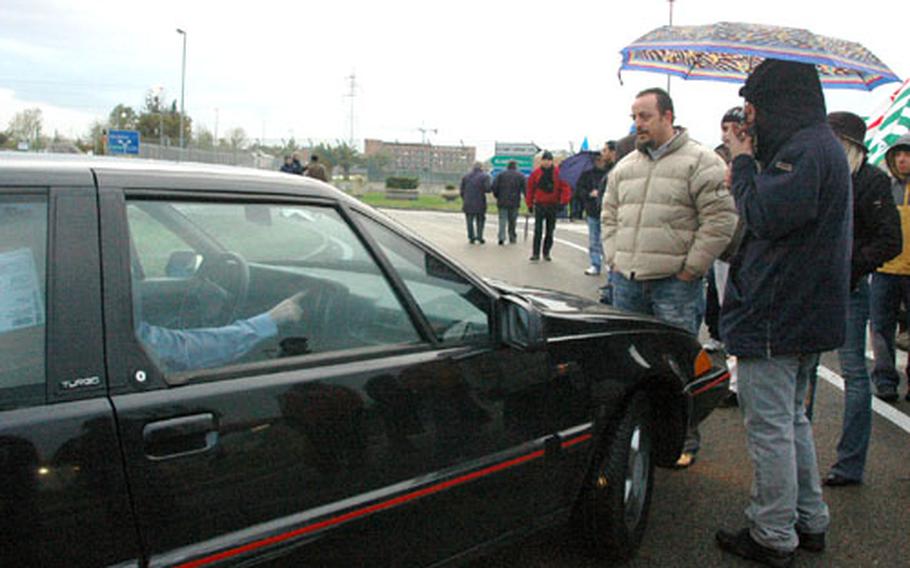 For the most part, Friday’s strike at the front and back gates of the U.S. Navy’s support site base by Italian employees was civil, with infrequent pockets of tension between protestors and motorists who sought to enter the base and protestors who stood in front of cars to blocking passage. (Sandra Jontz / S&S) 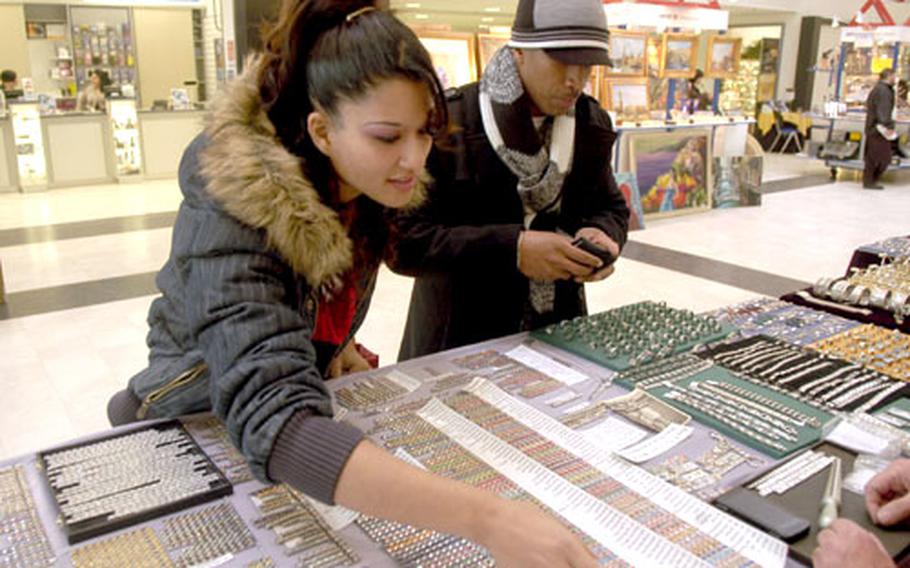 Sgt. John Scroggins, a soldier from Vilseck, Germany, made the trip to Stuttgart for Thanksgiving. He also got in a little shopping Friday with his girlfriend, Nakita Wilson at Panzer Barracks. More than 400 customers were on hand when Stuttgart’s Base/Post Exchange opened its doors at 6 a.m. Friday. (John Vandiver / S&S) 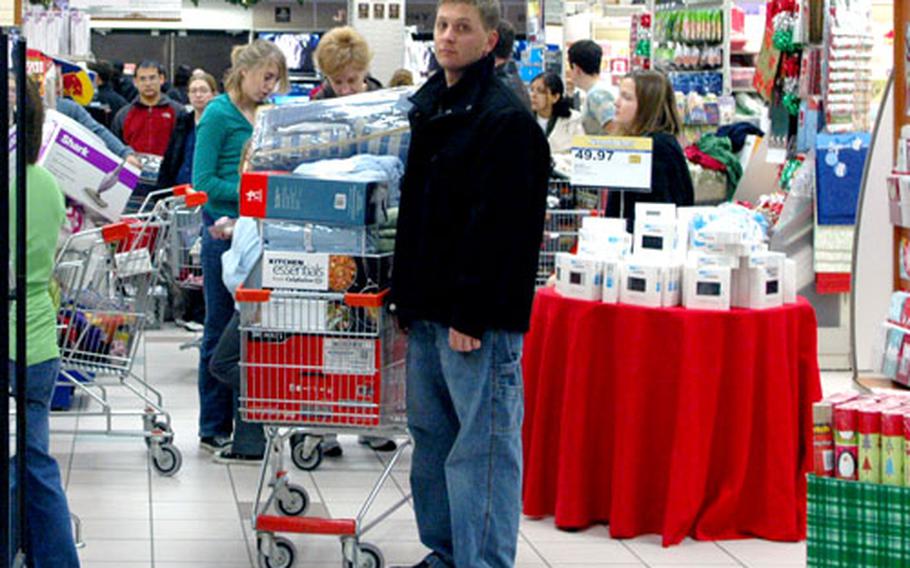 Shoppers flocked to the Navy Exchange at the support site base in Gricignano early Friday morning despite a strike by Italian workers. The NEX opened two hours earlier than normal for one of its busiest holiday shopping days. (Sandra Jontz / S&S)

NAPLES, Italy &#8212; As shoppers across Europe stormed base exchanges on Friday, traditionally one of the busiest shopping days of the holiday season, customers in Naples were slowed by an Italian labor protest that began blocking base gates in the wee hours of the morning and continued into the afternoon.

Italian employees of the U.S. Navy and several departments began gathering about 5:30 a.m. at the support site in Gricignano, forming a human barricade at the front and back gates to keep motorists from driving in or out. The protest forced the Naples commissary to close Friday because there weren&#8217;t enough non-Italian employees to staff the store.

Sherry Robinson showed up at 5 a.m. to avoid the blocked gates and napped in the car until the Navy Exchange opened at 8 a.m. &#8212; two hours early.

Protesters allowed essential personnel, such as hospital staff, those seeking medical attention and those who had small children, to access the base. &#8220;We&#8217;re not animals,&#8221; one protester said. &#8220;We are civil and we are understanding.&#8221;

Labor union representatives said the strike was the culmination of failed or stalled talks with base leaders on a number of issues. The two unions representing Italian employees at the base, UIL and CISL, joined in a united front to bring attention to their complaints.

The unions are protesting the lack of a Navy representative in the base&#8217;s human resources office to deal with labor issues impacting all Italian employees, relegating them to deal with various departments or commands independently, said Gennaro Di Micco, president of the local chapter of the CISL.

Additionally, some civilian positions once held by Italians &#8220;slowly and silently&#8221; were converted to U.S. positions &#8212; without the Navy having prior discussions with the unions, he said. Some Italian employees also complained of inequality at the base, such as having to work weekends when American employees do not, or not having some shopping privileges. Employees see U.S. officials &#8220;turning a blind eye&#8221; to unauthorized personnel shopping at the base, such as high-ranking local Italian officials, and then stopping Italian employees who work there, Di Micco added.

Navy leaders have met with union representatives on several occasions, but have come to no resolution. However officials &#8220;will continue discussions with labor unions on their requests,&#8221; according to Lt. Paul Macapagal, base spokesman.

About five hours into Friday&#8217;s protest, union leaders were summoned by the prefecture of Caserta, who offered to hear them out and do what his office could to resolve the labor issues, Di Micco said. During the meeting, the prefecture expressed a desire to meet with representatives of Naples and the base, and as a result the strikers disbanded around 2 p.m., earlier than anticipated.

However, another &#8212; and possibly much more disruptive &#8212; strike is still planned for Wednesday at the Navy&#8217;s Capodichino base, where many of main offices are housed. Protesters intend to block roads leading to the base. That strike will not change work schedules for non-Italian employees at Capodichino, and the security department will work with local law enforcement to avoid problems, Macapagal said.

Non-Italian employees reported for work at the exchange in the pre-dawn hours to avoid being blocked by the strikers, and the store provided them a catered breakfast, store manager Liz Dennis said. Shoppers at other military installations in Europe also swarmed base stores on Black Friday, so named because Stateside retailers have long relied on the day after Thanksgiving to put them &#8220;in the black&#8221; for the holiday season.

Shopping at the base exchanges in Britain got started at 7 a.m. Most of the deals were at the RAF Lakenheath store, where people were lured by fliers advertising deals on flat-screen TVs, laptops, electronics, clothes and other items.

Drake said the economy being in the dumps is not going to affect his spending this holiday season.

About 450 bargain hunters, looking to take advantage of big discounts at Stuttgart&#8217;s Panzer Barracks in Germany, were ready and waiting when the doors opened at 6 a.m.

Store manager Nate Porch said he added about 40 extra workers to accommodate the heavy traffic, which was steady throughout the day. &#8220;It&#8217;s been going great and we&#8217;re going to keep it going through the weekend,&#8221; said Porch, who spent much of his time announcing numerous special deals to customers.

Not everyone was in the market for a big buy. Sgt. John Scroggins, who made the trip from Vilseck to Stuttgart with his girlfriend, Nakita Wilson, was checking out some reasonably priced jewelry. He got a bracelet for himself, but hadn&#8217;t decided what to get for Wilson.

&#8220;We just have to find something she likes,&#8221; said Scroggins, a soldier from the 2nd Stryker Cavalry Regiment.

Stars and Stripes reporters John Vandiver and Mark Abramson contributed to this report.