Despite severe combat injuries, sergeant fulfills pledge made to troops 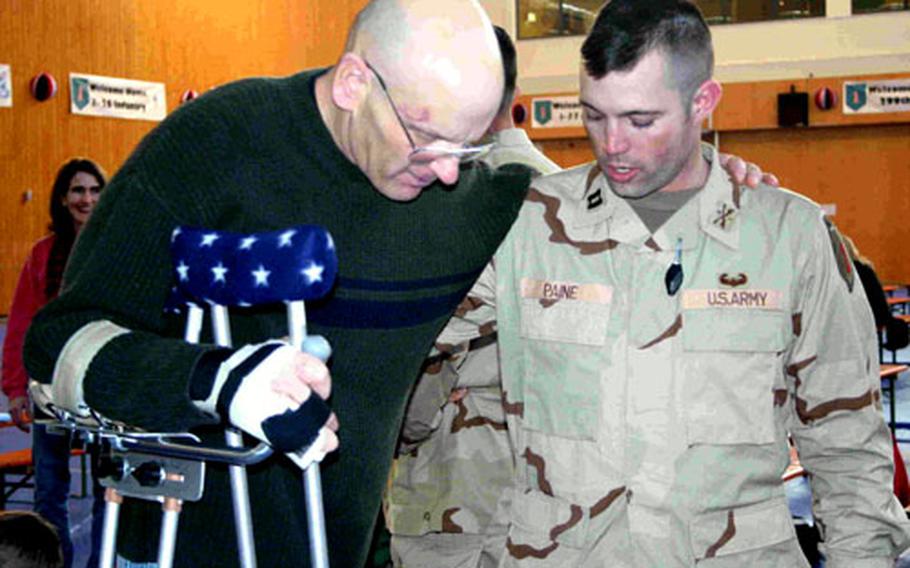 One month after a rocket-propelled grenade blew off his leg, mangled his arm and tore a gash in his head while his convoy patrolled in Iraq, 1st Sgt. Brent Jurgersen fulfilled a pledge he made to troops of the 1st Squadron, 4th Cavalry Regiment when they left for the Middle East a year ago. He vowed he would personally lead them home.

So he and his wife, Karin, flew home to Schweinfurt last week from Walter Reed Army Medical Center in Washington, where he awoke from a drug-induced coma less than three weeks ago. On Wednesday night, Jurgersen &#8212; the non-commissioned officer-in-charge of 1-4 Cavalry&#8217;s headquarters troop &#8212; greeted 80 of his soldiers behind a curtain in the gym at Conn Barracks.

Then he led them out.

Jurgersen&#8217;s appearance so soon after his second near-fatal injury in Iraq electrified his troops, who did not know he had come home. They clapped for several minutes when they saw him.

Last June, Jurgersen, 42, of Clinton, Iowa, suffered a gunshot wound to the face during an ambush near Ad Duluiyah, Iraq. He spent four months in Germany, enduring a series of surgeries on his mouth and upper jaw. Despite warnings from fellow troops, he returned to Iraq in October.

He worked furiously to be well enough to fly to Germany to meet his troops. Jurgersen&#8217;s doctors cleared him about 10 days ago, and a Vietnam veteran bought airline tickets for the couple.

Between Wednesday and Friday, Jurgersen greeted about 300 1-4 Cavalry troops as they arrived in Schweinfurt.

Like Jurgersen, the squadron has endured a year of loss and pain. Ten of its men died, all in ambushes, and dozens more earned Purple Hearts. In spite of daily patrols, searches and arrests, the insurgency raged throughout the year.

But the 1-4 Cavalry also played a lead role in the successful assault that freed Samarra from terrorists, supervised the reconstruction of health clinics and schools, trained Iraqi soldiers, secured polling sites on election day and modernized their own bases.

And, Jurgersen said, the unit is quite different from the one that left Schweinfurt a year ago.

His troops said it felt good but strange to be back in Germany after a year in Iraq. And several said it comforted them to see their first sergeant again.