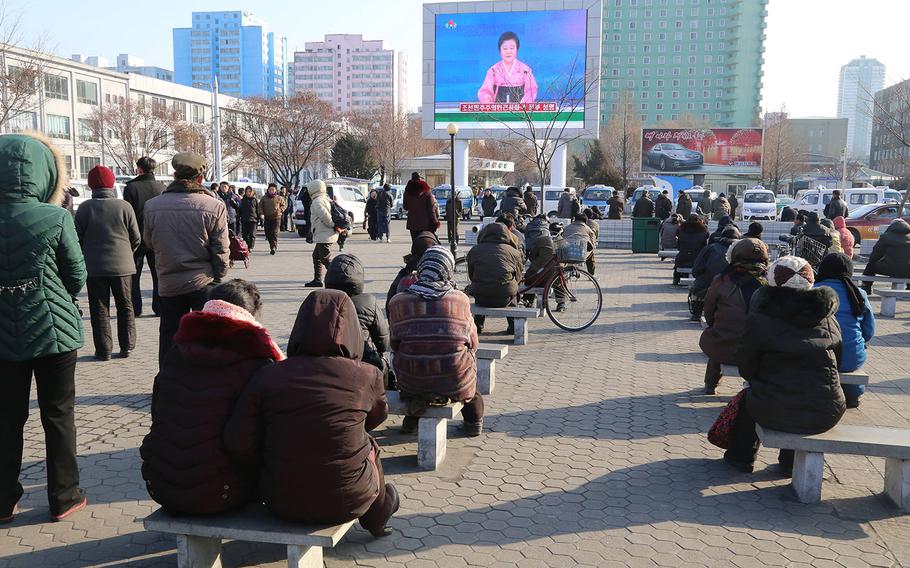 Pyongyang citizens gather in front of a big screen at Pyongyang Railway Station in Pyongyang, capital of the Democratic People's Republic of Korea, to watch a news report on the hydrogen bomb test on Jan. 6, 2016. (Lu Rui, Xinhau, Zuma Press/TNS)

North Korea is more isolated than ever, its very existence seemingly at risk with ally China signing off on tough U.N. Security Council sanctions designed to force the country to give up its aggressive nuclear and missile programs by tightening a noose around its weak economy.

The North’s government warned its people this week that an “arduous march” is ahead due to famine. Its health care system is reportedly a mess. When forest fires break out, there is little effort to extinguish them.

Kim still is carrying out bloody purges of high-level officials to consolidate power and prove that he will accept no dissent. But there are no signs that the North is building a godlike cult of personality around him as it did with his father and grandfather. Instead he has become the smiling face of cold aggression, personally signing the order for the country’s fourth nuclear test on Jan. 6, attending missile launches and tests of other weapons systems, and ordering more of both.

But no matter how much the North seems to be teetering on the verge of collapse, it most likely will continue to survive, said Van Jackson, associate professor at the Asia-Pacific Center for Security Studies in Honolulu.

After all, the country has been surviving sanctions for the past two decades, even allowing its people to starve.

“Things are not in a good place, but they haven’t been in a good place for quite some time,” Jackson said. “In the late ‘90s, the situation was much more dire in regard to famine and large-scale deaths, like in the hundreds of thousands.

“We don’t have evidence of that happening right now to that degree – and they survived that.”

The key is a delicate balancing act that benefits both North Korea and China. Pyongyang keeps the U.S., South Korea and Japan at bay with fiery rhetoric about turning their cities into ash and a friendship of necessity with Beijing, which would prefer to prop up Pyongyang — no matter how distasteful — than take the risk of a U.S.-friendly government rising on its doorstep.

China is seen as the pivotal in making the new sanctions bite. And while it’s talking a good game now, analysts doubt Beijing will enforce the measures to the point that the North could collapse.

“The outsourcing of North Korea policy to China has been a dismal failure because Chinese interests are at odds with U.S. interests over a whole range of issues that Washington tends to compartmentalize, but Beijing sees as interconnected,” including its aggressive expansionism on disputed islands, said Mohan Malik, China expert and professor at the Asia-Pacific Center for Security Studies. “It has been a major policy distraction for Washington and Tokyo even as Beijing focuses on turning the South China Sea into a ‘Chinese lake.’ Playing both sides of the equation — troublemaker and trouble shooter — works to Beijing’s advantage.”

From all accounts, China and North Korea have drifted far apart since the Korean War to the point they are connected only by geography and necessity, with signs of open distaste on both sides.

It’s the same for the Chinese, Cha said. “I think the Chinese despise the North Koreans. I think they feel like, especially this new generation of leadership in China, feel like if there ever is a weight that is tied to their ankles, it’s North Korea … I’ve described it as sort of they’re in a mutual hostage relationship. Neither of them can afford to leave the other.”

“The political relationship between [Chinese President] Xi Jinping and Kim Jong Un right now is certainly at a very low point,” he said. “Kim Jong Un is the first Korean leader who has not made a single pilgrimage to the Middle Kingdom to pay tribute. However, there’s still no change to China’s longstanding priorities on the Korean Peninsula: no war, no instability and no nukes — in that order.”

Beijing would like for North Korea to open its doors to development; the three poorest Chinese provinces are near the North Korean border. It can’t do that while the international community pushes for sanctions designed to further isolate Pyongyang.

Beijing seems most likely to enforce sanctions on North Korea’s exports of precious metals and minerals, which compete with China’s sales. Other targets of sanctions include exceptions for imports and exports that can’t be directly tied to benefiting the North’s nuclear and weapons programs.

“There are many loopholes.” said Shunji Hiraiwa, professor of contemporary Korean Studies at Japan’s Kwansei Gakuin University. “If you see the Sino-North Korea Friendship Bridge that connects the two countries, the traffic flow of supplies from China remains unchanged.”

And, as South Africa did during U.N. sanctions over apartheid, North Korea has found ways around sanctions. Hiraiwa said there is a good possibility that North Korea will manufacture methamphetamines or heroin, or counterfeit U.S. currency. It has been accused of doing both before, sometimes using diplomatic pouches for deliveries.

A 2013 Washington Post article estimated the North’s annual revenues from methamphetamine sales at $100 million to $200 million.

There also are major concerns that, rather than use its nuclear weapons, it could sell them, either to other countries — it reportedly has helped the nuclear programs of Iran and Syria — or to private buyers.

“So far, North Korea announced that they would not sell or transfer nuclear weapons or nuclear-related supplies in an expectation of resumption of bilateral talks with the United States,” Hiraiwa said. “However, depending on how the U.S. will respond, there is a possibility that North Korea will sell them to terrorists.”

If the North is caught doing that, it could be the final straw, even for China.

Experts say the first sign that the North Korean regime has collapsed or is on the verge of doing so would probably come from China, likely by massing troops along the border. Unusual troop movements in that area earlier this year sparked speculation that it might be happening; China dismissed the rumors, and things turned back to normal.

“China’s biggest concern is the U.S. military’s advancement to its next door,” said Homare Endo, director of the International Exchange Center of the Tokyo University of Social Welfare. “Should there be any sign of it happening, China will choose to take an initiative to bring down the Kim regime by its hand.”

It would be unrealistic to think that Beijing and Washington haven’t considered scenarios of sudden collapse or a coup. But neither capital is likely to share its planning on the subject, leading to the possibility of chaos, including outright conflict, over land grabs and control of the North’s growing arsenal of nuclear weapons and missiles. Russia could even get involved.

“I suspect that more than any other capital, Beijing has its ears close to the ground in Pyongyang and the PLA (People’s Liberation Army) is far more ready than others to wage and win the next Korean war to establish its supremacy in the region,” Malik said. “As it did in the past, the border between China and Korea will move again. It’s a question of when, not if.”

North Korea’s use of weapons of mass destruction could spark a quick U.S.-led invasion that U.S. military officials have said could be carried out, in troop numbers and tactics, in ways that would mirror World War II.

Other possibilities include a coup — both Kim’s father and grandfather reportedly quelled attempts — or his death.

“The possibility of a sudden collapse of North Korea is ever-present,” Malik said, with Kim’s recent sudden weight gain even leading to speculation about his health.

There are also suggestions the regime could collapse from a pandemic. Reports are rife that the North is desperately short on even basic medical necessities, such as penicillin, syringes and painkillers. It has closed its doors completely when pandemics such as Ebola and Middle East Respiratory Syndrome have occurred.

“Movement of peoples across borders who carry germs is part and parcel of the frenetic pace of business in Asia, but the health infrastructures of most states are capable of handling outbreaks and containing them,” Victor Cha said. “Everywhere perhaps except North Korea.

“Their paranoid reaction to the Ebola outbreak and to MERS gives one a sense of how concerned the leadership is about a pandemic crossing their borders into a state without any semblance of a national health infrastructure.”

Stars and Stripes staffers Wyatt Olson and Chiyomi Sumida contributed to this report.