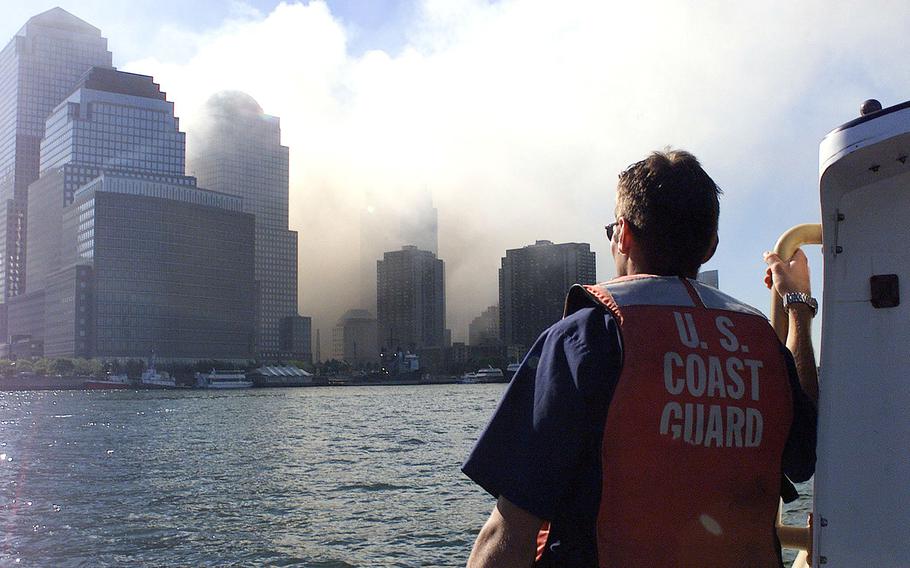 Coast Guard crewmembers patrol the harbor after the collapse of the World Trade Center in New York on Sept. 11, 2001. The Senate on Wednesday, Sept. 28, 2016, voted to override President Barack Obama's veto of a bill that would allow families of the victims of the 9/11 attacks to sue the government of Saudi Arabia. (Tom Sperduto/U.S. Coast Guard)

WASHINGTON — Congress on Wednesday overrode a presidential veto and cleared the way for 9/11 victims to sue Saudi Arabia, despite warnings from the Defense Department.

The law, called the Justice Against Sponsors of Terrorism Act, makes it possible for victims’ families to sue Saudi Arabia in U.S. court over claims it supported terrorists who waged a series of attacks – including a suicide attack with a passenger jet on the Pentagon – that killed nearly 3,000 people. Fifteen of the 19 hijackers were Saudi nationals.

Families took emotional appeals to Congress and the new legal powers had wide support in Congress. But JASTA drew sharp opposition from President Barack Obama and Defense Secretary Ash Carter, who said it could lead other countries to prosecute U.S. troops serving overseas.

“The bill is near and dear to my heart because it would allow the victims of 9/11 to pursue some small measure of justice,” said Sen. Chuck Schumer, D-N.Y., who was a sponsor of the original bill.

Schumer said federal law that deems foreign governments including Saudi Arabia immune from litigation should not protect those countries that finance or orchestrate terrorist attacks on American soil.

“If they had nothing to do with 9/11, they have nothing to fear,” Schumer said.

Saudi Arabia, a kingdom ruled by the Saudi royal family, has long been a key U.S. ally in the Middle East but it has drawn criticism for funding and exporting a fundamentalist form of Sunni Islam.

In July, previously classified pages of a 2004 congressional investigation into the 9/11 attacks were released to the public and showed hijackers had contact with members of the Saudi government and royal family, raising more concerns over whether the country provided some support.

The votes in the Senate and House were the first time an Obama veto had been overturned, and despite widespread support, many lawmakers voiced mixed feelings about supporting families who had lost loved ones in 2001 and the potential consequences of the new law.

“That’s the concern, that we lower the protections that our people have around the world,” Thornberry said.

Sen. Bob Corker, R-Tenn., said he prayed over the JASTA law’s potential “unintended consequences that work against the national interest” and struggled with his vote in support of the JASTA law.

“I have tremendous concerns about the sovereign immunity that could be put in place by the countries because of this vote,” said Corker, the top Republican on the Foreign Relations Committee.

Carter said nations officially recognized as state sponsors of terrorism can already be sued and the JASTA law expands that legal power to include Saudi Arabia and other U.S. allies.

It could encourage other nations to pursue charges against the United States, Carter warned lawmakers.

“This is likely to increase our country’s vulnerability to lawsuits overseas and encourage foreign governments or their courts to exercise jurisdiction over the United States or U.S. officials in situations in which we believe the United States is entitled sovereign immunity,” Carter wrote in a Monday letter to Congress.

That could also put troops at risk when they deploy to Iraq, Afghanistan or elsewhere in the world, according to Carter.

“U.S. servicemembers stationed here and overseas, and especially those supporting our counter-terrorism efforts, would be vulnerable to private individuals accusations that their activities contributed to acts alleged to violate a foreign state’s law,” he wrote.

Lawsuits against the United States could result in sizable monetary awards – even if the military deems troops innocent – and foreign nations could attempt to seize overseas bases or equipment, Carter wrote.