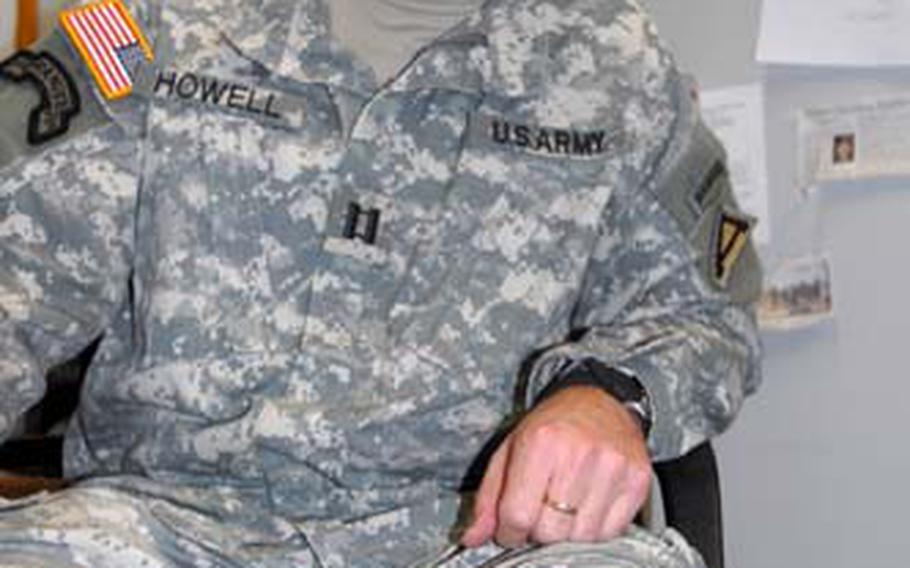 Team Cherokee commander Capt. Terry Howell shows the scars on his left knee, where he was wounded by enemy fire in Afghanistan. (Seth Robson / S&S)

HOHENFELS, Germany &#8212; Capt. Terry Howell could have stayed in Germany for Christmas with his wife and 10-year-old daughter and people would still regard him as a hero.

The Taliban shot the 43-year-old Team Cherokee (Company C, 1st Battalion, 4th Infantry Regiment) commander in the left kneecap and right calf back in August, two months into an eight-month mission to Afghanistan.

After two surgeries downrange, another two in Germany, three months on crutches and numerous physical therapy sessions, Howell is on the verge of achieving his goal &#8212; rejoining his unit downrange.

During his time at home, Howell has received regular reports on what his men are going through downrange.

Soon after he was medically evacuated, the company lost a young soldier, Pfc. Tan Ngo, 20, killed in action. So far, 18 members of the 170-man unit have been wounded, mostly by improvised explosive devices, Howell said.

"We recently had four soldiers badly hurt by an IED," he said. "They were medevaced back to Walter Reed and two are pretty serious. I had to contact their families and tell them how thankful we are for what their soldiers have done."

The return to Afghanistan is likely to be emotional, Howell said.

Most soldiers would not be rated fit to deploy in Howell&#8217;s condition.

Eight-inch-long scars run down both sides of his swollen knee and along his calf where the bullet lodged. There are nine screws and two metal plates that will stay in the knee for another year, limiting its movement to 100 degrees.

Howell said he can live with his physical handicaps.

When he gets home, the former triathlete hopes he can get back to cycling but doesn&#8217;t expect to run again.

"I could hump up a mountain with my gear but coming down would be painful," he said.

Lt. Col. John Lange, the 1st Battalion, 4th Infantry Regiment commander, said that Howell recovered faster than expected and that he was probably pushing himself because he wanted to get back to his unit.

Downrange, Howell will oversee the important task of handing off Team Cherokee&#8217;s mission to the unit due to replace it &#8212; Team Blackfoot, another company from the same battalion, Lange said.

"I think it&#8217;s going to have a very positive morale impact on those soldiers to see him come back," he said. "It will be something that will energize them in the closing part of the deployment."