Despite obstacles, Air Force has support 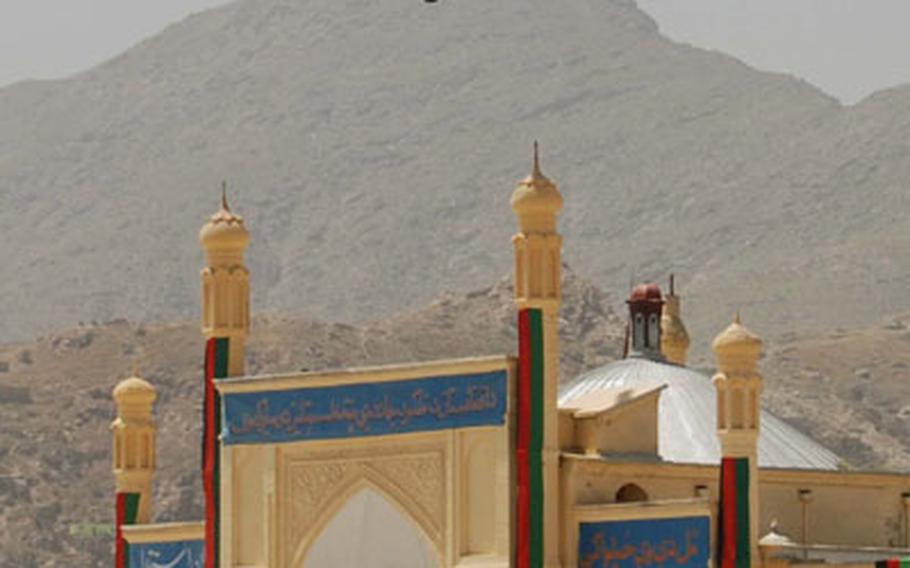 An Afghan military helicopter passes in review during the parade commemorating the 15th anniversary of the Mujahidin victory. The occasion marks the capture of Kabul from the communist regime. (David M. Votroubek / U.S. Navy)

An Afghan military helicopter passes in review during the parade commemorating the 15th anniversary of the Mujahidin victory. The occasion marks the capture of Kabul from the communist regime. (David M. Votroubek / U.S. Navy) 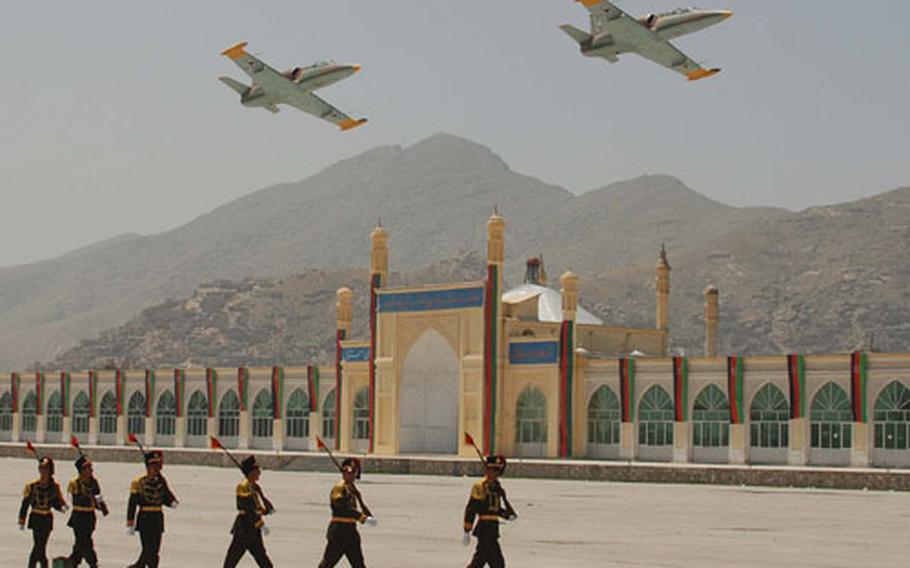 Afghan National Army Air Corps jets pass in review during a parade commemorating the 15th anniversary of the Mujahidin victory. The occasion marks the capture of Kabul from the communist regime. (David M. Votroubek / U.S. Navy)

An aide to the Afghan air chief slipped back into the carpeted office with a rolled-up blueprint and hurriedly handed it to the boss.

Maj. Gen. Mohammed Dawran promptly unfurled the thing, revealing a color-coded plan for Shindand Airbase in western Afghanistan. Some of the sites he began pointing to represented future renovations, while others delineated new construction for an installation that will play an important role in the resurrection of an air force for Afghanistan.

&#8220;Shindand will be the training academy for the Afghan Air Corps,&#8221; Dawran said through an interpreter.

The thought of it puffed up an already-proud man, a MiG-21 fighter pilot who has had an up-and-down ride his entire air force career.

Two years ago, Afghanistan didn&#8217;t have an air force, not really. Today, plans call for a fleet of well over 100 aircraft, rotary as well as fixed-wing, a corps of at least 5,000 airmen, two or three primary air bases and a few smaller ones, and an academy for future airmen. Additionally, U.S. Air Force personnel are coming on board to help.

The corps&#8217; current fleet of Soviet-era aircraft &#8212; six planes and 13 helicopters &#8212; needs a lot of care and cajoling. A dozen more helicopters are expected to arrive soon, but just last week a rocket fired on the corps&#8217; headquarters in Kabul temporarily disabled an An-32 transport plane.

Besides newer and better aircraft, the list of &#8220;needs&#8221; ranges from basic spare parts to modern &#8212; or even semi-modern &#8212; navigational equipment, to training and certification opportunities for pilots.

The airfield ramp on the corps&#8217; side of Kabul International Airport is in serious disrepair. Bits of loose concrete litter the area to such a degree that it would surely force a short-term closure at a U.S. airfield.

Yet there have been glimpses of glory for the 1,200-strong force.

Recently, thousands of people turned out for a military parade in Kabul that featured a flyover of Afghan aircraft. The sight of those flying machines, decrepit though some may be, excited the faithful.

About a month ago, Afghan helicopters of the Soviet Mi series airlifted hundreds of people threatened by floods in the north and east of Afghanistan. Lt. Col. Habibullah, a helicopter training officer who uses only one name, exuded satisfaction as he recalled the humanitarian effort.

And soon a new corps headquarters will open that is sure to instill even more pride in this fledgling air force.

As he sat in his roomy office, Dawran, 54, worked a strand of brown prayer beads in his right hand. He recalled the twists in his career &#8212; from getting his pilot wings to the long civil war, which he calls &#8220;the dark period,&#8221; to the rise and untimely loss of Ahmed Shah Massoud, the late but revered Afghan leader. Now, in the twilight of his career, Dawran believes he and his fellow airmen have pulled the institution out of a steep dive.

Still, he prefers to keep his feet on the ground and take matters one mission at a time.