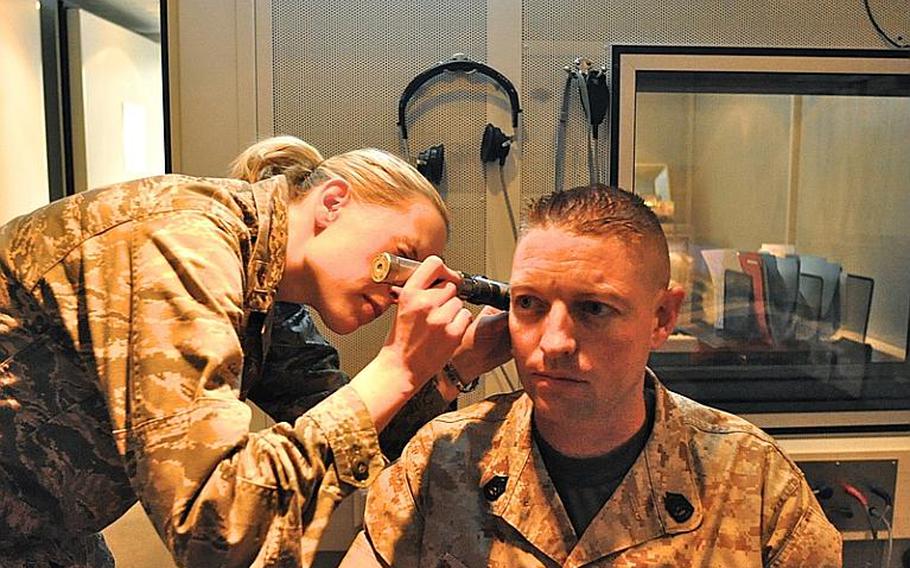 Buy Photo
Marine Gunnery Sgt. Ben Coleman bluffed his way through his post-deployment hearing exams. It wasn't until three years later he revealed to doctors and audiologists there that he could no longer hear out of his left ear. (Seth Robbins/Stars and Stripes)

Buy Photo
Marine Gunnery Sgt. Ben Coleman bluffed his way through his post-deployment hearing exams. It wasn't until three years later he revealed to doctors and audiologists there that he could no longer hear out of his left ear. (Seth Robbins/Stars and Stripes) 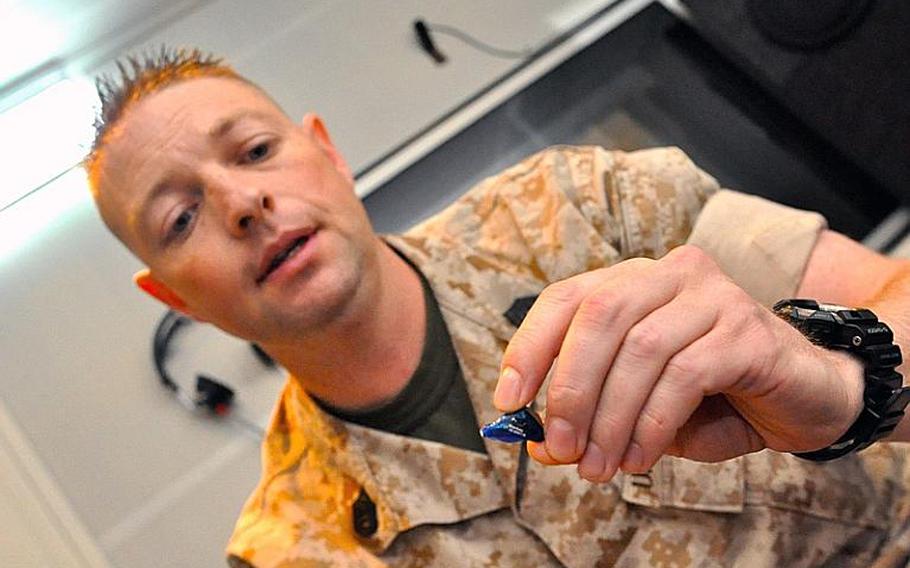 Buy Photo
Marine Gunnery Sgt. Ben Coleman bluffed his way through his post-deployment hearing exams. It wasn't until three years later he revealed to doctors and audiologists there that he could no longer hear out of his left ear the result, he suspected, of an explosion in Iraq during a 2005 tour. Despite a series of measures to reduce the number of servicemembers returning with hearing damage, hearing loss and tinnitus remain the most common service-related disabilities claimed by vets the past three years, according to the latest annual benefits report by the Department of Veterans Affairs. (Seth Robbins/Stars and Stripes) 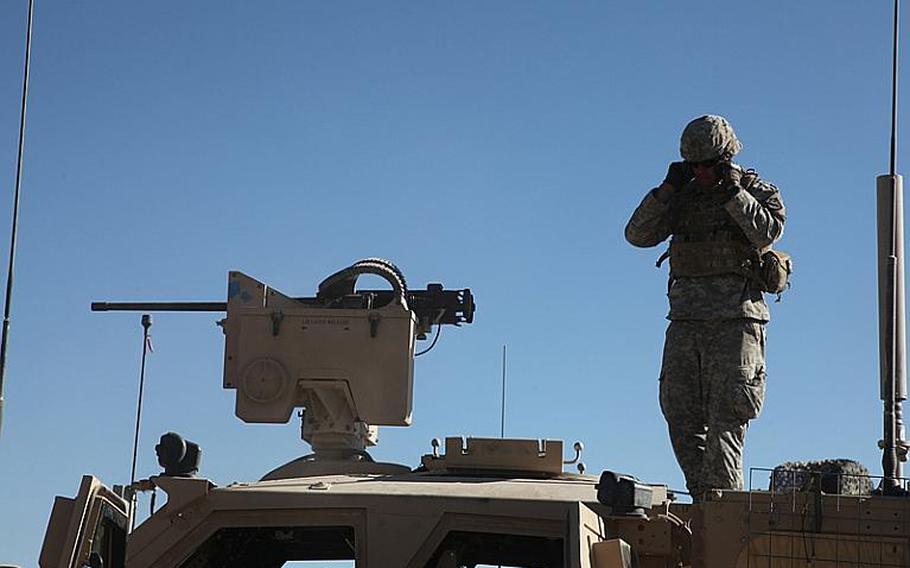 Though he was unsure he could hear a tone in his headphones, he depressed the handheld clicker anyway.

&ldquo;Honestly I don&rsquo;t know how I got through those exams,&rdquo; Coleman said. &ldquo;I guess I was just guessing a lot.&rdquo;

It wasn&rsquo;t until three years later, in 2008, when he began working as a liaison to wounded Marines at Landstuhl Regional Medical Center in Germany, that Coleman revealed to doctors and audiologists there that he could no longer hear out of his left ear &mdash; the result, he suspected, of an explosion in Iraq during a 2005 tour. He also told them about a loud whistling in both his hears that was so severe it caused migraines.

But Coleman only sought help after meeting other active-duty soldiers at Landstuhl with hearing loss.

&ldquo;I was just glad it wasn&rsquo;t going to be a career-ender,&rdquo; he said, &ldquo;I wanted to retire as a Marine.&rdquo;

During the past five years, the military has initiated a series of measures to reduce the number of servicemembers returning with hearing damage. It has introduced advanced earplugs, mandated more training about hearing protection and increased testing to detect hearing loss.

But hearing loss and tinnitus, a debilitating ringing in the ears, remain the most common service-related disabilities claimed by vets the past three years, according to the latest annual benefits report by the Department of Veterans Affairs.

In 2009 about $1.1 billion in disability compensation was paid out for these two conditions alone.

Army doctors say blasts are the main culprit, but cumulative exposure to artillery fire and other sudden noises, such as mortar attacks, can be just as devastating, especially when earplugs aren&rsquo;t worn.

At the Hearing Center of Excellence at Wilford Hall Medical Center in Texas, Dr. (Lt. Col.) Carlos Esquivel, an ear, nose and throat physician, said that 80 to 85 percent of soldiers he treats have permanent hearing damage.

&ldquo;Unfortunately, these are very young guys, that is the tragic thing,&rdquo; he said. &ldquo;They are 20 now and have quite a bit of hearing loss. Can you imagine when they are 50?&rdquo;

An increase in hearing troubles

Lt. Col. Marjorie Grantham, the hearing program manager for Army Public Health Command, said the increased rate is in part the result of more rigorous testing. Five years ago, the Army mandated that all soldiers receive hearing exams before a deployment. An additional post-deployment screening was instituted in 2009.

Blasts cause violent changes in air pressure that can rupture the eardrum, break bones within the ear and deaden essential nerves. Damage to hearing can begin at 80 to 85 decibels &mdash; the noise level of sitting in a Blackhawk helicopter. For comparison, the loudest setting on an iPod is only 100 decibels. Firing an M16 assault rifle far exceeds that at 156 decibels and explosions are much louder, said Capt. Michael Murphy, the Army&rsquo;s hearing program manager at Landstuhl Regional Medical Center, the main hub for injured troops downrange.

Some forms of hearing loss are temporary: Servicemembers exposed to a blast will often find their hearing impaired for several days before it returns.

But extreme or constant exposure to loud noise can result in permanent damage to hair cells, which relay sound to nerve endings within the inner ear. Damage to the hair cells and nerve endings cannot be restored, no matter one&rsquo;s age, and will result in hearing loss that ranges from mild, such as the inability to hear talk amid background noise, to near or total deafness, Murphy said.

And damaged cells and nerve endings can trigger tinnitus, an exhausting condition in which people perceive a loud chirping, buzzing, or ringing in their ears without any acoustic stimuli.

The ringing, doctors and researchers say, is the brain producing phantom signals, similar to phantom limb pains. More than 300,000 veterans of the wars in Kuwait, Iraq and Afghanistan are currently being compensated for tinnitus, making it the top service-related injury. While there is no cure for tinnitus, therapies using white noise, such as the drone of a fan, can help mask symptoms.

Some of the most vulnerable to hearing loss and tinnitus are infantrymen, said Air Force Maj. Jennifer Laack, the chief of audiology services at Landstuhl.

Soldiers with mild hearing loss can be outfitted with tiny digital hearing aids that can restore much of their hearing. But their days of patrolling outside the wire are finished, though they can potentially deploy in other jobs, Murphy said.

&ldquo;That&rsquo;s the sad part,&rdquo; he said. &ldquo;Telling these guys that only wanted to be infantry that they can no longer do their job.&rdquo;

Stopping the onslaught of sound

Early in the Iraq and Afghanistan wars, the military issued earplugs, but those earplugs did not always fit properly, and were often worn incorrectly. Soldiers and Marines often refused to wear them outside the wire, fearing that they would not be able to communicate or hear enemy sounds.

The earplugs have since been redesigned three times, and the latest generation can be toggled between two settings: one that blocks steady noise, such as the whirr of a helicopter, and the other dampens the louder, sudden noises of firing a weapon or an explosion. Costing about $8 a pair, the earplugs contain tiny acoustic filters that deflect sounds above 110 decibels, but allow lower-decibel sounds to pass freely.

Soldiers are now fitted for the earplugs during basic training, and their use is mandatory during a majority of training exercises, which may be increasing compliance downrange, said Landstuhl&rsquo;s Capt. Murphy.

A sergeant serving in Afghanistan, who asked not to be identified, said he rarely wears earplugs because he needs to &ldquo;see and hear everything in the battlefield.&rdquo;

&ldquo;When you&rsquo;re taking close-contact fire,&rdquo; he said, &ldquo;and there are a lot of echoes off buildings, you need to be able to hear where the shots are coming from. That&rsquo;s easier for me to do without earplugs.&rdquo;

No longer on the front lines, but still a Marine

Coleman said he knows that his days of &ldquo;kicking in doors&rdquo; are over, but he is determined to remain a Marine until retirement, despite his hearing loss.

He said he believes he can identify the exact day in 2005 when his hearing was damaged. A sergeant then, he was leading a squad on a patrol in Iraq&rsquo;s Haditha district. The squad had finished examining a report of a roadside bomb when they began to take on small arms fire. Coleman and his unit dashed for the armored trucks, but just as Coleman reached the vehicle, a wild dog that had been lurking nearby, lunged at him.

To stop the dog, the Marine in the turret threw a flash-bang grenade.

It detonated next to Coleman&rsquo;s head. He was wearing an earplug in his right ear, and in his left ear was a small radio that let him talk to the other Marines in his squad.

At Landstuhl, an MRI would later reveal that the explosion forced Coleman&rsquo;s left eardrum to press against his ear bone, stopping sounds from passing through properly. Instead of opting for a risky operation that could have potentially made his hearing loss worse, Coleman chose to wear a hearing aid.

&ldquo;Most people I know don&rsquo;t even know I have it,&rdquo; he said. &ldquo;It&rsquo;s like having one iPod headphone in. But instead of music, I hear the world.&rdquo;

Stars and Stripes reporter Martin Kuz contributed to this report.