Despite Marines’ presence, fear of Taliban persists in Afghan town Although relatively stable compared to other parts of Afghanistan, at least two Taliban suicide bombings have occurred in Delaram in the past two years, along with fatal shootings of Marines and Afghan police. (Drew Brown / S&S)

Although relatively stable compared to other parts of Afghanistan, at least two Taliban suicide bombings have occurred in Delaram in the past two years, along with fatal shootings of Marines and Afghan police. (Drew Brown / S&S) Marines usually conduct several foot patrols of the town each day to improve security and ensure residents that their job is to protect them. But even after two years, it is still an uphill struggle to dispel Taliban influence in the town. (Drew Brown / S&S) Members of Company I, 3rd Battalion, 4th Marine Regiment prepare to head out on patrol in the town of Delaram in southwestern Afghanistan&#39;s Nimruz province. A platoon of Marines has been posted in the town for the last two years alongside local police in an effort to bolster security, but tangible results have been slow in coming. (Drew Brown / S&S) 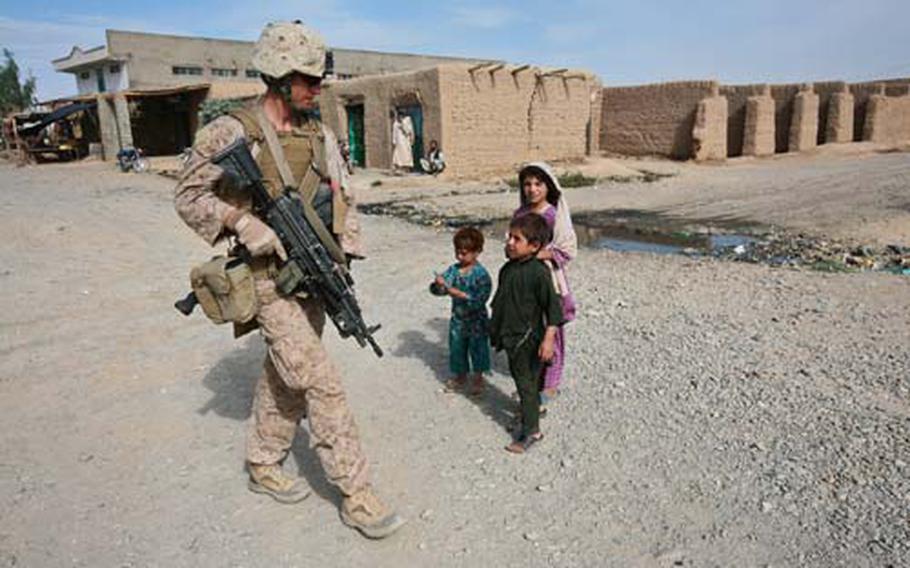 Children in the town of Delaram in southern Afghanistan&#39;s Nimruz province approach a member of Company I, 3rd Battalion, 4th Marine Regiment on patrol. Children frequently come out to greet the troops and ask for small gifrs, especially writing pens. (Drew Brown / S&S) 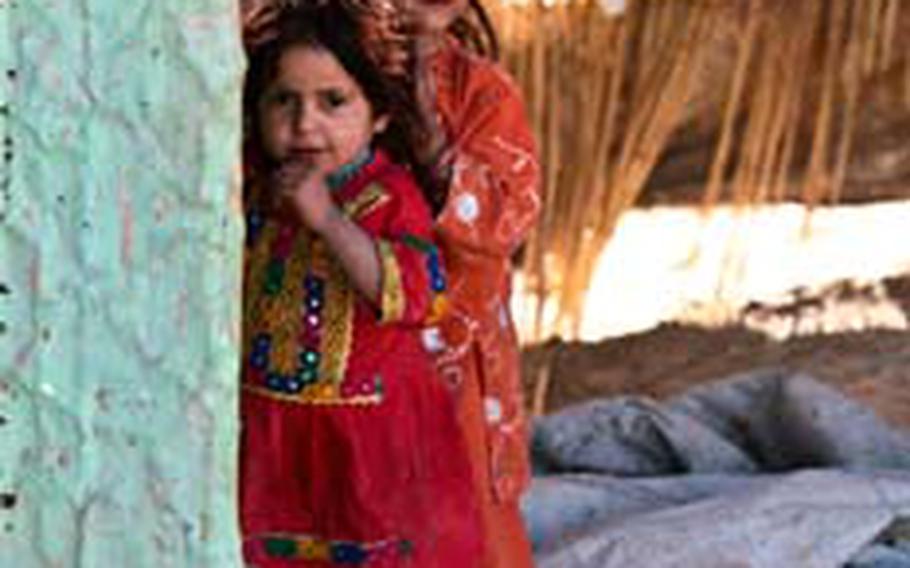 Two young girls stand outside the door of their father&#39;s shop as U.S. Marines patrol the town. (Drew Brown / S&S)

DELARAM, Afghanistan &#8212; The Marines were making good on a promise, delivering a dozen backpacks full of pencils and notebooks to a boys school they had discovered just a few weeks earlier while on patrol.

But the schoolmaster&#8217;s demeanor was markedly different from the first time the Marines had dropped off supplies. Then, he had said he would invite the Marines for tea the next time they stopped by.

Now, he thanked them politely for the gifts, but was clearly uneasy. So the Marines kept the visit short.

It was not what they had hoped for.

"We just wanted to sit down and have a chat with him," Coughlin said. "But, apparently, in the intervening time, some people here said something to him."

Two years after the Marines first deployed to Delaram, a hardscrabble town in southwestern Afghanistan&#8217;s Nimruz province, a pervasive fear of the Taliban continues to underlie nearly every facet of life.

Delaram is relatively stable compared to other regions where rebel fighters are battling international troops. Only a few suicide attacks and fatal shootings of Marines and Afghan police have occurred in the last two years.

But U.S. troops, and the civilian specialists who recently joined them, seem to have hit a wall in terms of trying to build trust with the local residents and promote some sort of civilized society.

Their goal has been to create a model of change for one of southern Afghanistan&#8217;s most impoverished and lawless regions. But intimidation by the militants is complicating their efforts to improve security, foster local governance and launch developmental aid projects.

"I think [the people] really want to help us, most of them," said 2nd Lt. Troy Gent, 31, of Cedar City, Utah, who commands a platoon from Company I, 3rd Battalion, 4th Marine Regiment, which is posted alongside Afghan police. "But since there&#8217;s still that Taliban influence here, they&#8217;re still afraid."

It is unclear how entrenched the Taliban truly are in Delaram, a trading hub about 150 miles from the border with Iran. But they have proved capable of influencing townspeople and villagers in dramatic ways.

In early October, townspeople rioted for three days, keeping the Marines and local officers hemmed into the police station after a rumor spread that U.S. forces had burned a Quran and killed a dog and dragged it through a mosque.

U.S. forces said the incident never happened and blame the Taliban for spreading the falsehood. Gunmen fired randomly from the crowd, apparently trying to provoke the Marines and Afghan police into shooting back and killing rioters. But the Marines and police did not return fire, and there were no serious casualties on either side.

"I think the Marines won that battle," Gent said.

Less than a month ago, members of the 3rd Battalion, 4th Marines became the fourth Marine unit to deploy to the Delaram district in the last two years. The Marines serve seven-month tours, which has made it difficult to sustain momentum from one rotation to the next. But that is a problem consistent with U.S. and other international forces all over Afghanistan, experienced hands say.

"We don&#8217;t have eight years of experience here. We have one year of experience eight years in a row," said Dick Cavagnol, a civilian specialist with the U.S. Agency for International Development, who was posted to the town in early November.

Cavagnol and a State Department governance specialist are the first civilian technical advisers assigned to the district on a long-term basis. The two men are essentially starting from scratch.

The district governor is usually absent. There is no judge or prosecutor in town. New officials have been assigned to the district, but they have yet to arrive.

A local elder recently told the American advisers that many people in Delaram are tired of the Taliban and want to see them gone, but they are afraid to step forward.

"Each village has two, three, four, five Taliban," the local elder said. "And if someone comes from the village to help the police, the Taliban will kill them."

Local police are poorly led and undermanned and rarely seem to venture beyond the wire. During a recent three-day period, the Marines conducted nearly all of the security patrols, with the Afghan police accompanying them once a day, at most. The Afghans routinely postpone training sessions with U.S. advisers.

U.S. civilian officials are willing to shell out development dollars, but first they want to see a local council elected from tribal elders who can help determine how aid money is directed.