Despite mandate, some European bases not protected by fences Traffic enters a U.S. housing area Wednesday in Wiesbaden, Germany. An American resident of Wiesbaden says there are three housing areas in the city without fences or identification checkpoints. (Ben Bloker / S&S)

Traffic enters a U.S. housing area Wednesday in Wiesbaden, Germany. An American resident of Wiesbaden says there are three housing areas in the city without fences or identification checkpoints. (Ben Bloker / S&S) A student walks past a checkpoint outside the elementary school at Hainerberg housing in Wiesbaden, Germany. (Ben Bloker / S&S) 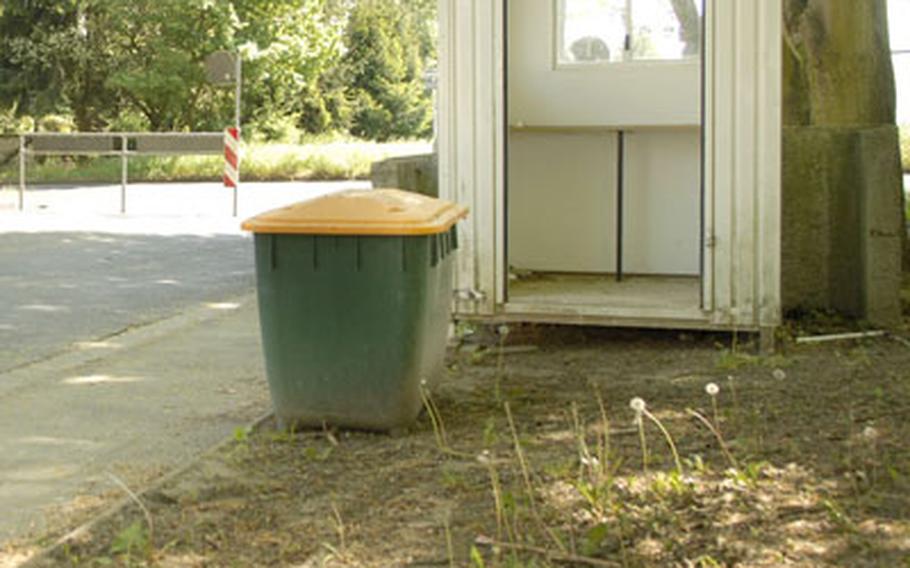 One of many guard shacks sits empty at a U.S. military housing area Wednesday in Wiesbaden, Germany. (Ben Bloker / S&S) 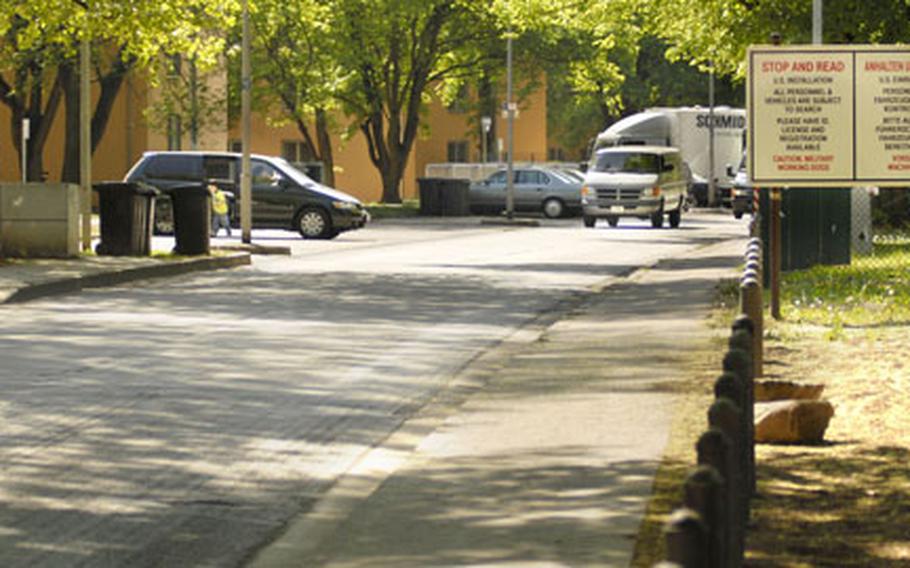 A warning sign stating that vehicles and personnel are subject to search lets drivers know that they are entering a U.S. military housing area in Wiesbaden, Germany. (Ben Bloker / S&S)

Six years after the Army issued a mandate that all housing complexes around Europe be shielded with fences, hundreds of families continue to live in unsecured military neighborhoods where traffic rumbles unfettered.

In 2001, U.S. Army Europe required all of its installations, including housing areas, to be fenced. The mandate was needed to meet force-protection requirements and better protect soldiers and families living there, according to USAREUR.

When asked Wednesday how many bases and housing areas are out of compliance, military officials did not have an immediate answer. Officials from Installation Management Command and USAREUR are in the midst of reviewing the matter, said Bruce Anderson, an Army spokesman.

While officials probe, some residents in Wiesbaden are speaking out about the security shortfalls in their neighborhoods and at base facilities, such as day-care centers. After the U.S. Embassy in Germany issued an alert last week that warned Americans of a heightened terrorism threat and advised people to take extra precautions, an air of urgency was injected into discussions.

Buckley, the wife of an Army sergeant and a volunteer at base schools, says there are three housing areas in Wiesbaden &#8212; home to hundreds &#8212; where there are no fences or ID checkpoints. She&#8217;s gone all the way up the chain of command, making her security concerns known for years. Nothing has been done, she said.

Gates and ID checkpoints would be the logical steps, according to Buckley.

In all three housing areas, a city-owned road allows traffic to meander unimpeded.

A teacher at one of the base schools in Wiesbaden said parents have been expressing concerns about the lack of security.

In March, the German newspaper Wiesbaden Kurier reported that U.S. and German officials were in talks to give American forces control of the public road that passes through one of the housing areas. Such a move would enable the military to provide additional layers of security, the paper reported.

The Army, however, has not confirmed or gone public with any such plan.

Army housing in Wiesbaden isn&#8217;t the only unsecured housing in Europe. In other branches of the armed forces, from Italy to England, there are areas where troops live in open military housing communities.

U.S. Air Forces in Europe officials declined to get specific about security protocol at its housing facilities.

&#8220;We work very closely with host-nation civilian, military and law enforcement officials to ensure the safety of all concerned. To ensure the safety of our personnel, their families and our resources, we cannot discuss specific information,&#8221; Capt. Chris Watt said in a prepared statement.

In at least one Army location, action has recently been taken to bolster security. Back in October, the U.S. Army installation in Stuttgart announced plans to turn over to the German government a 10-acre slice of property where Americans live outside a security fence.

The push to eliminate the risk posed by the unfenced property was accelerated more than a year ago after Marine Gen. James L. Jones, commander of the U.S. European Command, ordered all garrisons within EUCOM to decrease or eliminate security vulnerabilities.

Buckley says vulnerabilities are all about in Wiesbaden, where she argues that being vigilant for signs of danger has little meaning. When trucks and strangers are the norm on neighborhood streets, what is there to report, she asked.

&#8220;There is no way (for Army families) to keep a low profile here. There are military signs everywhere,&#8221; Buckley said.