Despite loss of legs, officer still plans to serve 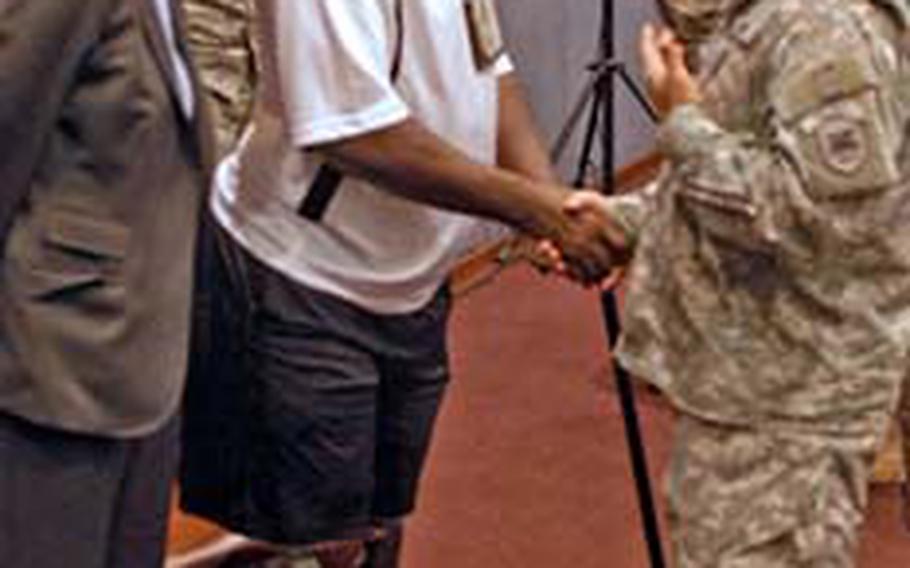 Buy Photo
Lt. Col. Greg Gadson greets a fellow soldier during an appearance that he and wife, Kim, at left, made Friday at the base theater at Caserma Ederle in Vicenza. Gadson lost both his legs ito a roadside bomb in Iraq in 2007, but hopes to continue his 20-year Army career. (Kent Harris / Stars and Stripes)

VICENZA, Italy &#8212; It was a day that changed the Gadson family forever.

Lt. Col. Greg Gadson was returning to battalion headquarters on May 7, 2007, after attending a memorial service for two soldiers in his brigade killed in Iraq. The truck he was traveling in was hit by a roadside bomb and, within seconds, Gadson and his men were fighting for their lives.

Gadson was severely wounded in the blast. Despite the best efforts of his men &#8212; whom he credits for saving his life &#8212; the former Army football player lost both his legs above the knee.

Sitting in front of a few hundred soldiers in the Caserma Ederle theater Friday, Gadson &#8212; his artificial legs clearly visible &#8212; looked back on that day and the 860-some others that have passed since.

Now facing the prospect of ending his 20-year military career, Gadson and his wife, Kim &#8212; a fellow West Point graduate &#8212; showed no bitterness about his loss.

He admitted to a few setbacks during rehab and attempting to come to grips with his lost limbs.

Both Gadsons spoke extensively about the help they received from military organizations, friends and fellow servicemembers. Kim Gadson urged troops to actively seek services the Army provides for soldiers and their families, not just for those with battle wounds such as her husband&#8217;s, but for other issues impacting their lives.

Each spoke about how the attack affected their lives and answered questions from the audience.

Gadson mixed in a few instances of humor, some of which caught audience members off guard. In one case, he mentioned he was the same person &#8212; minus a few inches &#8212; after the accident. &#8220;That was a joke,&#8221; he said, eliciting nervous laughter.

Gadson said he hopes to continue with his career through a program that evaluates whether servicemembers in conditions like his can still fulfill roles in the military.

He was the first person to be fitted with the Power Knee 2, the latest in prosthetic technology that allows those missing most of their legs to walk in a somewhat normal fashion. Several newspaper accounts related Gadson&#8217;s struggles and triumphs this spring while learning to walk with the device developed by Ossur, an Icelandic company.

He&#8217;s also been mentioned in newspaper sports sections. A New York Giants fan because of fellow Virginian and linebacker, Lawrence Taylor, he was named an honorary co-captain for the team during its Super Bowl run.

He hopes to provide similar inspiration to fellow servicemembers.