Despite Islamic State beheadings, NATO has no plans for new intervention in Libya 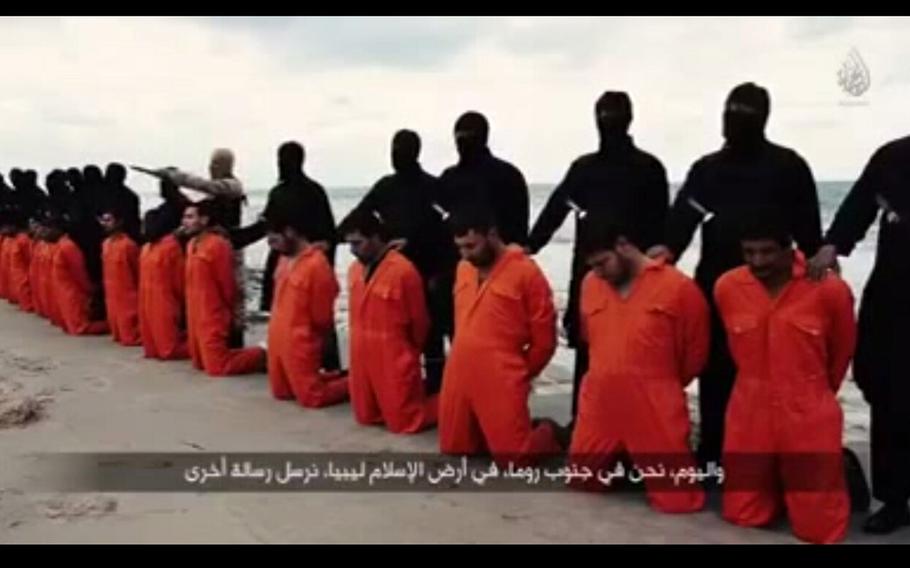 An image grab from a video published on Youtube on Feb. 15, 2015 shows black-clad Islamic State militants in Libya stand behind the kidnapped Egyptian Coptic Christians on the Mediterranean coast, Libya, according to the video. The Egyptian Orthodox Church confirmed the killing of 21 Egyptian Coptic Christians kidnapped by Islamic State in Libya, state-run MENA news agency reported. (Xinhua, Sipa USA/TNS)

NATO is not currently considering another intervention in Libya, where the beheading of 21 Coptic Christians by Islamic State militants has prompted calls for a stronger international response.

“There is no discussion within NATO on taking military action in Libya,” a NATO official said on Tuesday. “However, Allies consult regularly on security developments in North Africa and the Middle East and we follow events in the region closely.”

After the Islamic State posted video of the murder of the Egyptian Christians, Cairo announced on Monday that it had launched a series of airstrikes on militant targets. Top officials in Italy, just 200 miles across the Mediterranean Sea from Libya, have called for an international military response. Some have expressed concern that militants could mingle with the refugees fleeing to Italy via Libya.

The issue is a sensitive one for the Western military alliance, whose seven-month bombing campaign in Libya in 2011 is blamed by many for causing the current chaos.

Since that intervention, which led to the ouster and killing of strongman Moammar Gadhafi, the once-affluent oil-producing nation has collapsed into a virtually failed state. While the country has an internationally recognized transitional government, it is not recognized by the population as a whole. Heavily armed militias control large parts of the country, and Islamic militant groups such as Ansar al-Sharia hold sway in other areas. Recently, the Islamic State has also been making inroads, taking advantage of a power vacuum.

“Egypt’s desire to strike out militarily to solve the problem in Libya is understandable given the killing of its citizens,” said Jacqueline L. Hazelton, a professor at the U.S. Naval War College in Newport, R.I. “And airstrikes can degrade the capabilities of various armed actors within Libya. But more military intervention in Libya isn’t going to solve the Libya problem.”

Since NATO’s air campaign over Libya — lauded by alliance leaders at the time as a new model for conducting humanitarian interventions — critics have said the West failed to take sufficient steps during the aftermath to help Libya rebuild itself.

Still, massive U.S.-led nation-building efforts in places such as Iraq and Afghanistan prove how fraught such rebuilding aid campaigns can be.

Hazelton said that by eliminating Gadhafi, a power vacuum was created that made the rise of multiple armed groups an inevitability.

“The chaos in Libya was foreseeable before the West made its decision to militarily support the rebels (in 2011),” Hazelton said. “However well-meant, that intervention did not help the West, and it did not help the Libyans suffering its aftereffects. Further military action is most likely to prolong their suffering.”

For now, the U.S. appears focused on efforts aimed at political reconciliation in Libya rather than spearheading a military response in the country.

“It is time for Libyans to realize that only they can build a new Libya; only they can save their country,” wrote U.S. Ambassador to Libya Deborah K. Jones in a Tuesday commentary in the Libya Herald marking the fourth anniversary of Libya’s 2011 revolution.

“Those who continue to fight, those who refuse to engage in dialogue, must be sanctioned by the international community — and we are prepared to do that,” Jones wrote.

NATO, too, is focused on negotiated solutions.

“We also stand ready to support Libya with advice on defense and security institutions building, following the request made by the Libyan government in October 2013, once the security conditions allow,” the NATO official said, speaking on customary condition of anonymity.

NATO, along with U.S. Africa Command, had hopes of training Libyan military forces, but security conditions in the country have delayed those plans indefinitely.