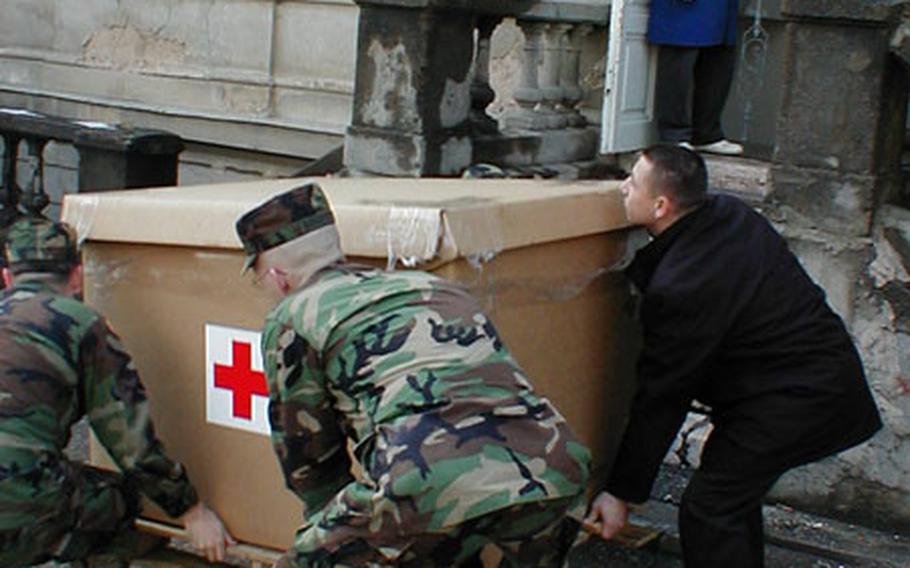 U.S. military personnel unload part of the nearly $500,000 worth of supplies the U.S. European Command provided to several hospitals in Bosnia and Herzegovina recently. The supplies came from EUCOM&#39;s excess property program. (Courtesy of EUCOM)

STUTTGART, Germany &#8212; The U.S. European Command is pushing ahead with dozens of humanitarian aid projects despite funding uncertainties as the Department of Defense cautions that some of the money could be needed to fight Iraq.

&#8220;There is no program in EUCOM &#8230; that for the amount of money has more impact,&#8221; said Air Force Lt. Col. Jay Lindell, the international division chief for EUCOM, which oversees the humanitarian aid projects.

EUCOM has three programs that provide humanitarian relief. The first involves excess property, the second involve construction contracts with foreign companies and the third involves projects in foreign countries built by U.S. troops deployed on exercises to the region.

The programs may be used independently or combined to help a country that wants assistance, Lindell said.

For example, he explained, the U.S. military may use an Army engineering unit to build and renovate a medical clinic, and then rely on EUCOM&#8217;s excess property program to provide supplies.

Aid requests are often funneled through the U.S. embassies in individual countries, he said.

In fiscal 2002, EUCOM received a total of $13.4 million to complete 60 projects and support 19 training operations that resulted in construction and improvement projects in 56 countries, according to information provided by EUCOM.

However, due to budget constraints, Lindell said, there was not enough money to do all the projects EUCOM had wanted. &#8220;We literally get hundreds of requests,&#8221; which have to be whittled to the most important, he said.

In fiscal 2003, EUCOM has requested $27 million to complete about 300 humanitarian assistance projects.

Last year funding was cut, but Lindell said he expected at least enough money to do as many projects as last year.

But because of the looming war in Iraq and other military endeavors, it is unclear how much money EUCOM will get, said Paula Battistoni, the humanitarian assistance program manager.

Although the money has been allocated in the federal budget, the funding is being released in small parts so if, for example, a war in Iraq needed additional financing, the money could be redirected there.

Most projects are completed via the &#8220;Humanitarian Assistance-Other Program,&#8221; in which EUCOM contracts with companies in a local country to do the project. U.S. military personnel monitor the projects.

These programs are, in some case, the only way the U.S. military can have contact with several countries that it is prohibited from working with.

For example, the U.S. military is barred from military-to-military contact with Serbia-Montenegro. However, in recent months, EUCOM gave the country nearly $5 million in furniture, bedding, appliances, cold-weather clothing, vehicles and office furniture.

Vicki Landes, the excess property program manager, said the materials and equipment come from closed facilities. For example, she said, when the Department of Defense Dependents Schools in Europe closes a facility, EUCOM can get the equipment if DODDS doesn&#8217;t need it.

Some of the most sought-after items include fire trucks, ambulances and hospital beds. &#8220;That stuff goes fast,&#8221; she said.

Most of the construction projects cost about $200,000, Lindell said, and that amount goes a long way in many countries where EUCOM operates.

He cited two projects in Mauritania, a country three times the size of Texas, that has been devastated by drought and where families must walk three to 10 miles to get fresh water.

When a humanitarian aid project is completed, a plaque is erected that notes that the American people funded construction.

The U.S. European Command provides humanitarian assistance through three distinct programs that rely upon excess property, construction contracts in foreign countries and projects built by U.S. troops deployed on exercises throughout EUCOM&#8217;s area of responsibility. Many of the projects are funneled through the U.S. embassies. Some of the projects that are planned or have been completed by EUCOM are:

&#8226; Providing furniture and equipment to the National Training Center for Disaster Relief Workers in Tunisia.&#8226; Building a medical clinic and then supplying it with medical supplies, hospital beds and office equipment in Senegal.&#8226; Spending $80,000 to build two schools in Mali.&#8226; Spending $255,000 in Romania to build a school and repair a road.&#8226; Sending excess equipment to Mauritania, Niger, the Ivory Coast, Turkey and Belarus.&#8226; Building two new schools for $300,000 in Azerbaijan.