Despite doubts, Japan prepares end to ban on defending allies The Japan Maritime Self-Defense Force destroyer Takanami, left, sails alongside the USS McCampbell on March 9, 2014, in the Pacific Ocean. Japanese Prime Minister Shinzo Abe is expected to soon begin a process that, if approved by the national legislature, would allow Japan to defend the U.S. military and other allies on the high seas for the first time in the post-WWII era. Currently, Japanese forces or territories must be directly attacked to engage in defensive measures. (Chris Cavagnaro/U.S. Navy)

The Japan Maritime Self-Defense Force destroyer Takanami, left, sails alongside the USS McCampbell on March 9, 2014, in the Pacific Ocean. Japanese Prime Minister Shinzo Abe is expected to soon begin a process that, if approved by the national legislature, would allow Japan to defend the U.S. military and other allies on the high seas for the first time in the post-WWII era. Currently, Japanese forces or territories must be directly attacked to engage in defensive measures. (Chris Cavagnaro/U.S. Navy) Petty Officer 2nd Class Nathan Breen shows a Japan Ground Self-Defense Force soldier how to ''hotwire'' a Humvee during a training exercise at Naval Air Facility Atsugi, Japan, in November 2013. Japanese Prime Minister Shinzo Abe is expected to soon begin a process that, if approved by the national legislature, would allow Japan to defend the U.S. military and other allies for the first time in the post-WWII era. (Erin Devenberg/U.S. Navy) 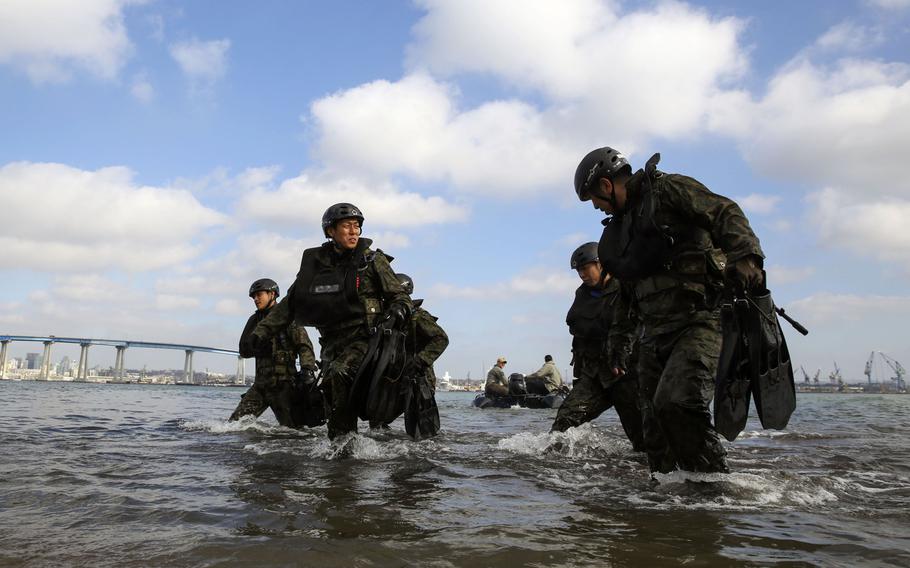 Japan Ground Self-Defense Force soldiers make their way onto Seal Beach while training with 1st Reconnaissance Battalion, 1st Marine Division, during an exercise in Coronado, Calif., in January 2014. Despite some opposition, the Japanese government plans to introduce a measure that would allow its forces to engage in collective self-defense with the United States and other allies for the first time in the post-WWII era. (Emmanuel Ramos/U.S. Marine Corps)

YOKOSUKA NAVAL BASE, Japan — Japan is poised to introduce a plan that would allow its forces to defend allies for the first time in the post-World War II era, even as polls indicate public opposition to a reinterpretation of the nation’s pacifist constitution.

Advisers to Prime Minister Shinzo Abe’s government say the legal maneuvers to end Japan’s ban on engaging in collective self-defense will begin before the end of the national Diet session June 22, despite recent speculation that doubts from the public and some lawmakers within Abe’s ruling coalition would force delays.

Under current Japanese law, Japan cannot fight back if a U.S. Navy ship with which it is sailing comes under fire, unless the Japanese ship is also attacked. Nor can Japan use its Self-Defense Forces — a quasi-military the size of Britain’s — to rescue Japanese aid workers taken hostage in a foreign country.

RELATED: More Stars and Stripes coverage of the Pacific

If ending the ban were just about those two examples, there would be far less controversy. A January Kyodo News poll showed 70 percent approval for aiding Japanese hostages, and the United States enjoys high favorability ratings among Japanese.

Nevertheless, only 29 percent favored lifting the collective self-defense ban when asked the broader question in April by the Asahi Shimbun, which also opposes the government measure in its editorial pages. The unease comes primarily from the worry that it will increase Japan’s chances of fighting for the first time since WWII, possibly in a war that does not directly threaten the country.

Secondarily, many opponents frown on the government’s methods.

Instead of changing the constitution, which would require far more effort and a two-thirds majority vote in the Diet, Abe wants to change other laws to reinterpret it.

“How can something regarded as a violation or illegal under the present constitution suddenly be made legal?” Mizuho Fukushima, a Diet upper house member with the Social Democratic Party, told reporters recently. “We believe what is being done by Mr. Abe is basically the destruction of the current constitution.”

Fukushima’s view has been expressed by others among the fragmented gaggle of opposition parties in the Diet. But most concede that without public uproar or a schism within Abe’s overwhelming majority coalition, he will have the votes to end the ban. Abe already has gone to work on lobbying New Komeito, a small party within his coalition that initially expressed objections, to support his plans.

As of yet, public opposition to ending the ban hasn’t mattered much either. Abe himself retains about 60 percent popularity in most polls, despite majority opposition to his policies on defense, restarting nuclear reactors and raising taxes.

His “Abenomics” plan to revive Japan’s stagnant economy remains the linchpin of his popularity, coupled with the fact that no other party has effectively challenged him. The Democratic Party of Japan scored a measly 5.8 percent approval rating in a March Nikkei poll — which made it Japan’s most popular opposition party.

The government will begin its collective self-defense push with a Cabinet resolution and introduction of the issue to the full Diet. The resolution will come after a national security panel finishes its report on legal changes necessary to support a reinterpretation.

“We expect that the panel will submit its report next month,” Takeshi Iwaya, chairman of the ruling Liberal Democratic Party’s security research council, told reporters April 9. “The government will start full-blown discussion on the issue only after the report is submitted. However, the LDP is already discussing the issue in a forum.”

The law authorizing the Self-Defense Forces and others would then need amendment and approval by the Diet, where the LDP holds a commanding majority.

Shinichi Kitaoka, deputy chairman of the Advisory Panel on Reconstruction of the Legal Basis for Security, told Stars and Stripes that the changes to the Self-Defense Forces law might not be ready by Dec. 31 but shouldn’t be much later than that.

Why end the ban?

China’s claims on Japanese-administered territory, as well as its disputes over islands in the South China Sea with Japanese and U.S. allies, play a big part in Abe’s reasoning. So does Japan’s desire to pull its weight in United Nations-approved operations.

However, Abe also wanted the ban on fighting alongside allies lifted in 2006, during his aborted, one-year term as prime minister — well before China’s forces became more assertive over disputed territory.

Some supporters of collective self-defense point to the embarrassment of Japan’s 2004 deployment to Iraq on humanitarian and reconstruction missions. Because they weren’t allowed to fire on anyone, Japan’s forces stayed mostly on their base. When moving, they had to be guarded by the Dutch and small African countries, among others, Kitaoka said.

“Japan has a much bigger military than them and still they were defended by them — that’s ridiculous,” Kitaoka said.

Japan’s alliance with the United States works in part, Navy officials have said, because the overwhelming advantage U.S. forces have in offensive capability allows Japan to play a complementary defensive role. But Japanese government officials say smaller countries sometimes balk at being paired with Japan in international operations, knowing they may not get support in a potential firefight.

Not surprisingly, China has reacted negatively to Japan’s ambitions. So has South Korea, where a disputed island territory and belief that Japan’s government is unapologetic over Korea’s suffering during WWII have made Abe about as popular as North Korean dictator Kim Jong-un.

It’s a different story in Southeast Asia, where countries like the Philippines continue to face standoffs at sea with the Chinese over disputed territory. Southeast Asia also widely welcomed a recent decision by Japan that would allow it to export arms for the first time in the post-WWII era.

The United States, which has been working to strengthen its military alliance with the same Southeast Asian nations, also gave Abe’s plans to end the collective self-defense ban its approval.

“We welcome Japan’s efforts to play a more proactive role in the alliance, including by re-examining the interpretation of its constitution relating to the right of collective self-defense,” Defense Secretary Chuck Hagel said in a written response to Japan’s Nikkei newspaper just before his April visit to Tokyo.

There is some historical irony in the U.S. stance — it wrote the 1947 constitution stating that “the Japanese people forever renounce war as a sovereign right of the nation and the threat or use of force as means of settling international disputes.”

That constitutional passage has become part of Japan’s national identity — supporters and opponents of the collective self-defense ban largely agree on that.

But where ban supporters see a slippery slope to war, those who want to ease the restriction say that identity will keep Japan from using the right to collective defense in all but a handful of narrowly construed circumstances.

“All countries in the world are ready to exercise this right, except Japan,” Kitaoka said. “This is a very modest step.”