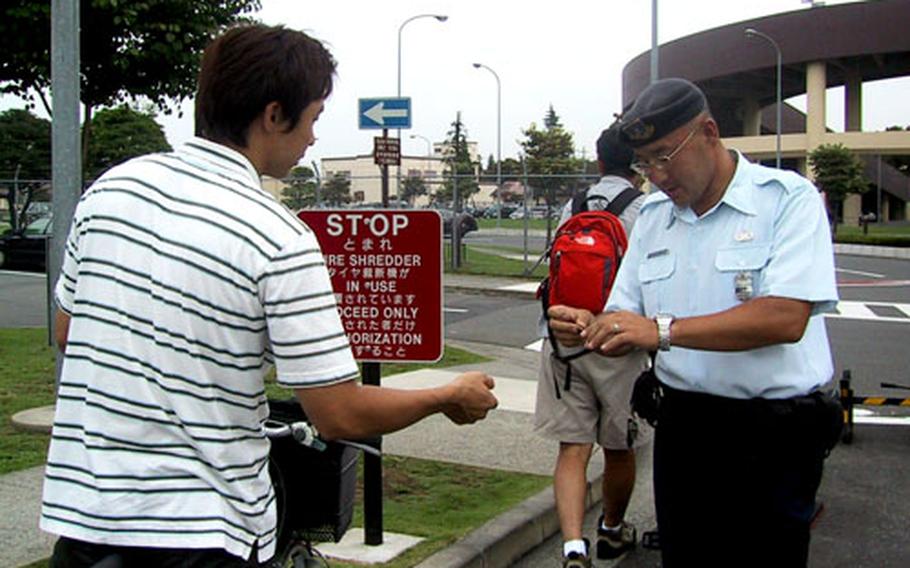 The top-ranking military official in Europe last week ordered an intense review of the theater&#8217;s base safety practices following a recent security breach at a base where civilians working for a private contractor guard the gates.

In the United States, a handful of Army bases using private contractors recently have come under fire for alleged security problems.

But in Japan, where Japanese civilians help provide base security, U.S. military officials say they are satisfied with the arrangement and say there have been no major security lapses involving base access in several years.

But that doesn&#8217;t mean they&#8217;re letting their guard down when it comes to force protection.

USFJ declined to discuss whether any security reassessment like the one in Europe is under way. But, said Bell, &#8220;The base commanders know they can&#8217;t ever be complacent about it, so they take it very seriously, and are always seeking ways to improve it in order to stay in front of those who might seek to harm us.&#8221;

Marine Gen. James L. Jones, commander of the U.S. European Command, said in a news release last week that although security procedures at EUCOM installations are good, force protection never can be treated as &#8220;business as usual.&#8221; He ordered his security experts to report back to him with recommendations for improvement within 60 days.

The release did not indicate if the action was in response to an Aug. 9 incident involving three anti-war protesters who cut a hole in the fence and entered Patch Barracks, EUCOM&#8217;s headquarters, in Stuttgart, Germany. The protesters walked around the base unchallenged, hung a banner and later walked out through the gate and turned themselves in, according to a Sept. 28 report in the European edition of Stars and Stripes.

In the United States, according to the Associated Press, the Service Employees International Union recently contended that job screening often was inadequate and security checks at gates frequently shoddy because of lack of manpower. The union said security work at seven U.S. Army bases was awarded under no-bid contracts to an Alaska firm that subcontracted the work to Wackenhut, the second largest security business in the United States. The union&#8217;s report cited complaints by guards who claimed a lack of adequate training and staffing.

The civilian guard program, as it&#8217;s known, was made formal as part of the Master Labor Contract in 1957. A bilateral agreement, it provides jobs for Japanese employees on U.S. military bases. The 950 guards employed throughout Japan are paid by the Japanese government but hired, vetted and trained by the military security forces where they work.

Several base residents said they have no problem with Japanese civilian guards monitoring base access, in part because they feel Japan is a safe environment.

&#8220;There are so many Japanese nationals working on base that it makes sense,&#8221; said Tech. Sgt. Carl Alexander, a vehicle maintenance mechanic at Misawa Air Base in northern Japan.

Staff Sgt. Catalina Caldwell of the 374th Aeromedical Squadron at Yokota Air Base, west of Tokyo, said she and her family were told of the practice before they arrived in Japan, and it&#8217;s never been an issue.

But Master Sgt. Reuben Jackson of Yokota&#8217;s 374th Maintenance Squadron said he thinks at least one U.S. servicemember ought to be on the gates at all times. He said he&#8217;s unsure whether Japanese personnel consistently can spot certain required markings on flight-line badges and other ID cards.

Brophy said all Japan bases have civilian guards assigned to their units. They perform a variety of law-enforcement functions including base entry control, sometimes in concert with U.S. military members.

Local installation commanders determine security posture, officials said, based on factors including the number of civilian guards available to them, number of deployed military personnel, the local threat situation, a facility&#8217;s importance or vulnerabilities and the amount and type of traffic that typically enters the gate. That posture can include a mix of civilian and U.S. military guards or military or civilian guards exclusively.

Military security experts in Japan say the civilian guard program has endured the test of time, consistently proving its effectiveness.

&#8220;They&#8217;re some of the most dedicated, hard-charging folks members of our cop unit have seen in our careers,&#8221; said Maj. Robert Kafka, 35th Security Forces commander at Misawa. &#8220;We have not seen any issues based upon language difficulties. They&#8217;ve turned away many folks with expired ID cards, folks barred from the base.&#8221;

Officials said the civilian guard program allows them to tap into an invaluable resource in a foreign country. Japanese sentries are employed much longer than their military counterparts, who typically rotate in and out of Japan every three years, and can communicate with host-nation residents who frequently seek base access.

&#8220;Our Japanese civilian guards work for us permanently and develop a superb breadth of experience and depth of knowledge on procedures for granting access to our installations,&#8221; said Takahiro Ichikawa, the 374th Security Forces Squadron&#8217;s supervisory security specialist at Yokota. &#8220;They are true experts, trained to take prudent action in any situation.&#8221;

Military officials did not offer any examples of a guard &#8212; U.S. or Japanese &#8212; making a security fumble. Nor would they discuss specific operational procedures. But Brophy said &#8220;there have been no major security incidents regarding base access by our civilian guards within the past several years.&#8221;

Both governments are involved in hiring civilian guards, who are subject to a Japanese National Police background check.

Kafka said civilian guards are vetted as if they were active-duty personnel.