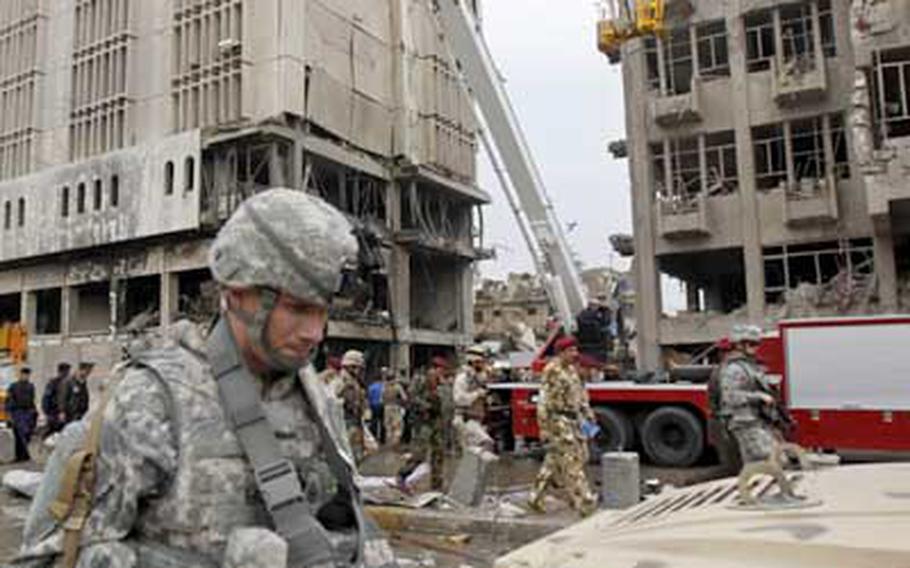 U.S. and Iraqi soldiers secure a massive bombing site near the new Finance Ministry in Baghdad on Tuesday. A series of attacks killed at least 127 and wounded more than 500. (Hadi Mizban/AP)

BAGHDAD &#8212; Despite another round of massive bombings that underscored the threat of political violence ahead of March elections, it remains unlikely that U.S. troops will take a major role in security during the vote.

The bombings Tuesday at government offices in Baghdad, which killed at least 127 people and wounded more than 500, raised tough questions for Prime Minister Nouri al-Maliki about the abilities of Iraq&#8217;s security forces ahead of parliamentary elections scheduled for March 7.

The U.S. military has warned of a possible rise in violence ahead of the vote.

&#8220;The government of Iraq has the lead in ensuring the safety of the Iraqi populous throughout the election period,&#8221; said Lt. Col. Mark Ballesteros, a U.S. military spokesman. &#8220;U.S. forces will provide security assistance for the elections as requested by the [Iraqi government] and in accordance with the security agreement.&#8221;

During a press briefing last month, Gen. Ray Odierno, the U.S. commander in Iraq, said planning for the upcoming elections would be based on the model used during provincial elections in January, when U.S. troops played a limited role.

Most U.S. troops stayed inside their bases during the January vote. The minimal violence was seen as evidence that Iraqi forces were increasingly capable of handling security. A spike in violence during the upcoming vote could send the opposite message, just as American combat forces prepare to leave the country next year.

The U.S. military sent some troops and forensic equipment to assist the Iraqis in the aftermath of the latest bombing, The Associated Press reported Tuesday.

In Baghdad on Wednesday, al-Maliki asked Iraqis for patience and warned against fomenting political divisions following the bombings, the Associated Press reported.

Iraqi state TV says al-Maliki has ordered a shake-up at the top of Baghdad security, according to AP.

The speaker of the Iraqi parliament, Ayad al-Samarraie, called on the ministers of defense and interior as well as the commander of Baghdad military operations to appear before a special session scheduled for Thursday, said Omar al-Mashhadani, spokesman for the speaker. Other security officials have also been asked to appear, he added.

Top security officials have twice failed to show up to answer questions in parliament about security lapses, after suicide bombers in August and October killed hundreds at other government buildings.

This time, Interior Minister Jawad al-Bolani agreed to attend the session under one condition &#8212; that it not be held behind closed doors, according to a statement released by his office, AP reported. It was not known if other officials would attend.

Al-Maliki also was expected to attend the session, al-Mashhadani said.

Since August, a trio of massive bombings against government targets in the city has killed roughly 400 people and highlighted the inability of Iraqi forces to prevent coordinated, well-planned attacks despite a heavy security presence.

There is widespread suspicion that the bombers in the previous attacks may have had inside help. Iraq arrested dozens of security officials after the October bombing.