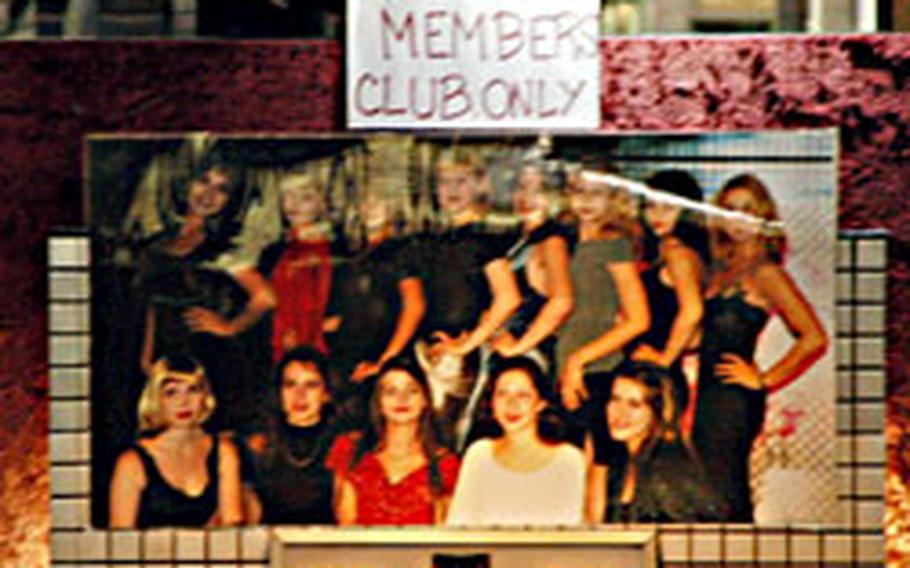 Foreign women like the Russians in the picture display come to Japan to work in “gentlemen’s clubs.” (Allison Batdorff / S&S)

Foreign women like the Russians in the picture display come to Japan to work in “gentlemen’s clubs.” (Allison Batdorff / S&S) 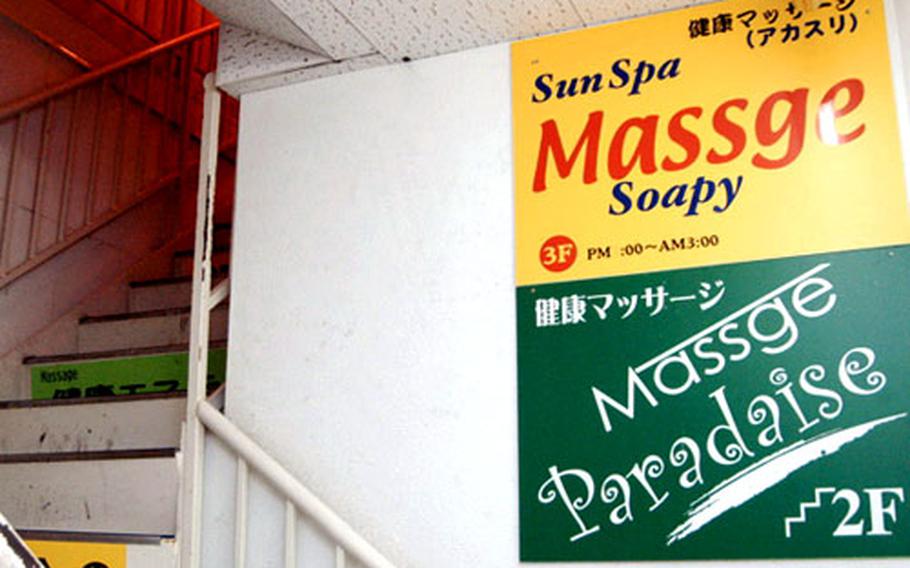 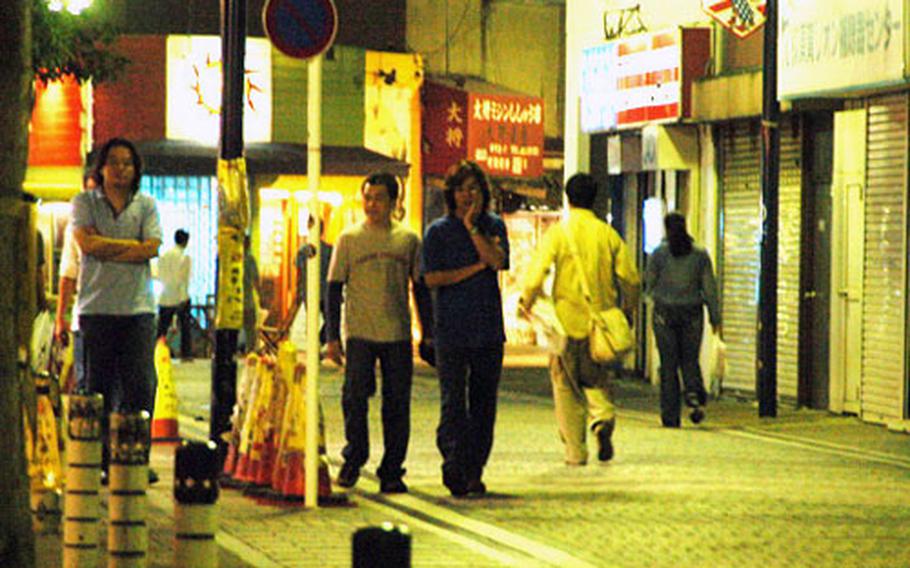 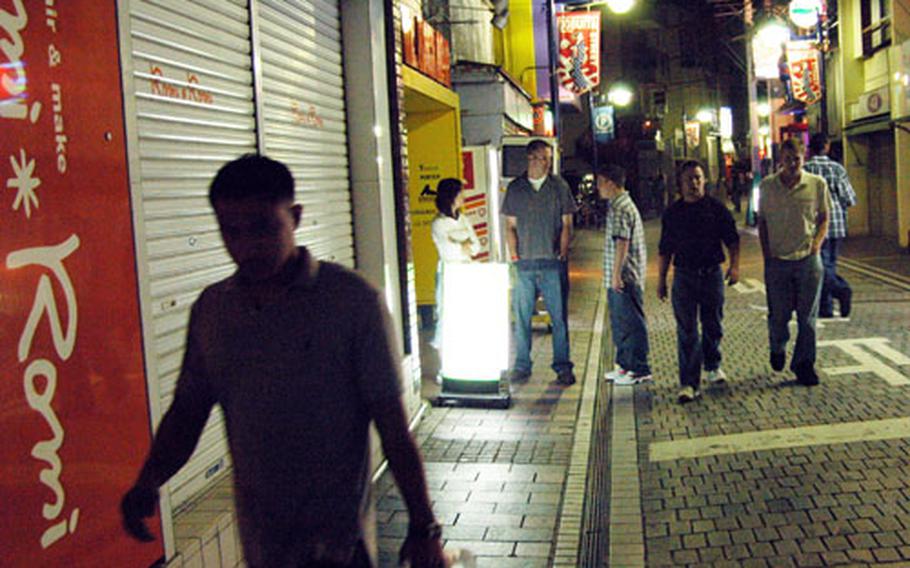 Foreigners talk to a woman outside of a Honch massage parlor in Yokosuka, Japan. (Allison Batdorff / S&S)

Editor&#8217;s note: Stars and Stripes reporters Allison Batdorff and Hana Kusumoto recently spent a Friday night in the entertainment district near Yokosuka Naval Base to explore the status of the sex trade a year after the Defense Department banned solicitation of prostitutes.

There is a woman on each corner grabbing for sailors on the street that runs from Yokosuka Chuo to the Honch, the entertainment center outside Yokosuka Naval Base.

One South Korean girl works in an upstairs parlor where customers order from a printed menu that offers a variety of sexual favors, from use of hands only to full sexual intercourse. She works there because there are no other jobs for her in Japan, she said.

A Chinese &#8220;massagy&#8221; girl on the corner said she came to Japan because she wanted to marry a Japanese man. She did, she said, and flashed a thumbs-up.

They did not want their pictures taken or permit their names to be used because they are &#8220;watched very carefully,&#8221; they said.

And because participating in sex for money is illegal for U.S. servicemembers under military law, sailors Stars and Stripes spoke to in the Honch also declined to give their names.

&#8220;Doing a massagy&#8221; is almost a rite of passage for male sailors when they get to Yokosuka, one USS Kitty Hawk sailor said. The sex trade is more permissible here than at home and easily available, he said.

It has been a year since the Pentagon changed military law to make &#8220;patronizing a prostitute&#8221; a specific offense. The move was made to strengthen the military&#8217;s stand against global human trafficking.

But there still is work to be done on the &#8220;demand&#8221; side of the equation, according to Gail McGinn, a Defense undersecretary who testified to that effect in a public hearing in June.

&#8220;The first concern continues to be the sex exploitation industry overseas in and near our areas of operations,&#8221; McGinn said.

In Japan, sex shops are permissible in certain areas as long as they give police notification. Japan&#8217;s prefectures also have their own laws. All sex service shops are illegal in Kanagawa prefecture, where Yokosuka Naval Base is.

But neither military restrictions nor Japanese law has made a dent in the Honch&#8217;s &#8220;massage&#8221; business, the South Korean sex worker told Stars and Stripes. And most of her customers are American sailors, she said.

Yokosuka police&#8217;s community safety division official agreed that the number of massage shops has remained static through the years. Yokosuka police say 12 sex shops &#8212; falsely advertised as &#8220;massage&#8221; or &#8220;esthetic&#8221; shops &#8212; are currently under investigation in the Yokosuka Chuo area.

There also are unpermitted businesses that hire foreign women to attend to customers, operate outside of business hours and charge outrageous amounts for drinks, a Yokosuka police spokesman said.

According to Shihoko Fujiwara, a coordinator with the Polaris Project, a group working to halt trafficking in Japan, &#8220;the soldiers can be, just the same as other Japanese men, &#8216;innocent&#8217; buyers of sex from abused women and children.&#8221;

&#8220;We sometimes receive calls to our hot lines asking for assistance from women in the sex industry, and they are working in Misawa, Atsugi and Yokosuka.&#8221;

&#8220;Law enforcement hardly prosecutes the illegal business, and many establishments can use trafficked victims for their business without worrying about a harsh penalty &#8230;&#8221; Fujiwara said. &#8220;Also, the anti-prostitution law that penalizes women to sell sex has been arresting victims, not the traffickers and those customers who buy sex from traffickers.&#8221;

One sex shop in the Honch, Orange Massage, recently was the object of a police raid. A police report said a 7th Fleet sailor was found naked on the bed and contraceptives and lotions were seized from a woman dressed in red at his side.

The sailor was released so he could make it back to the base in time for his midnight curfew, police said.

Three South Korean masseuses were arrested, two on expired visas, according to the police. They told police that sailors keep the shops in business.

Most of the women decide to come to Yokosuka on a short-term visa, and once that expires their job opportunities dwindle to places like illegal massage shops, said the community safety division official.

A half-dozen sailors Stripes spoke to in the Honch said they are a good target market due to the novelty, the convenience of paying for sex and because there is a lot of competition around a Navy base for women who aren&#8217;t in the sex trade.

But some sailors draw the line at paying for sex.