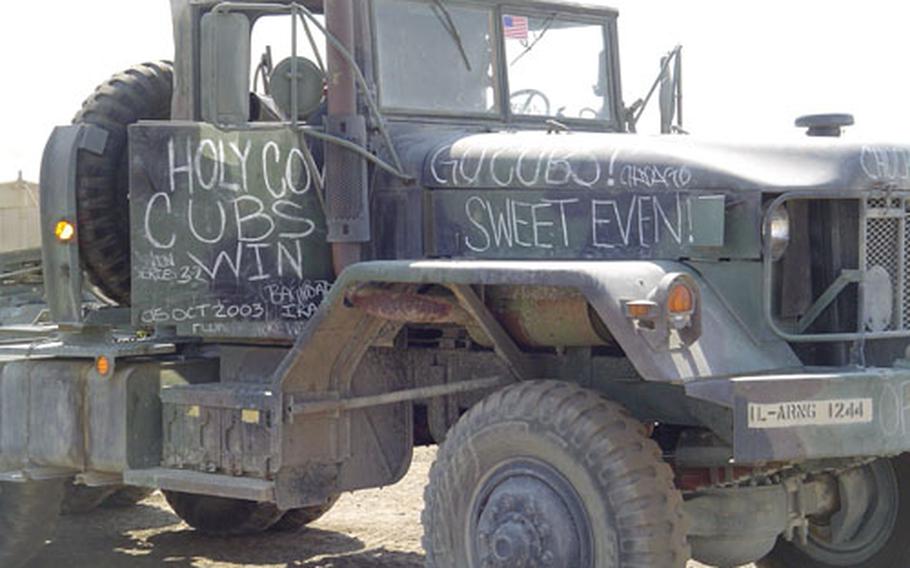 Members of the Illinois National Guard&#39;s 1244th Transportation Company, headquartered in North Riverside near Chicago, wrote messages of support for their beloved Cubs on their trucks during last year&#39;s post-season. (Courtesy of Donald May)

Members of the Illinois National Guard&#39;s 1244th Transportation Company, headquartered in North Riverside near Chicago, wrote messages of support for their beloved Cubs on their trucks during last year&#39;s post-season. (Courtesy of Donald May) Army Sgt. Andrew Lang, a mechanic with the 1244th Transportation Company, gives the thumbs-up to the wrecker operator as a broken winch is removed from an M818 truck. A majority of the unit&#39;s trucks are 818s, which rolled off the assembly line in the 1950s. (Fred Zimmerman / S&S) M818 trucks of the 1244th Transportation Company are mixed in with civilian trucks during one of the more than 800 convoys the unit participated in. (Courtesy of Donald May) 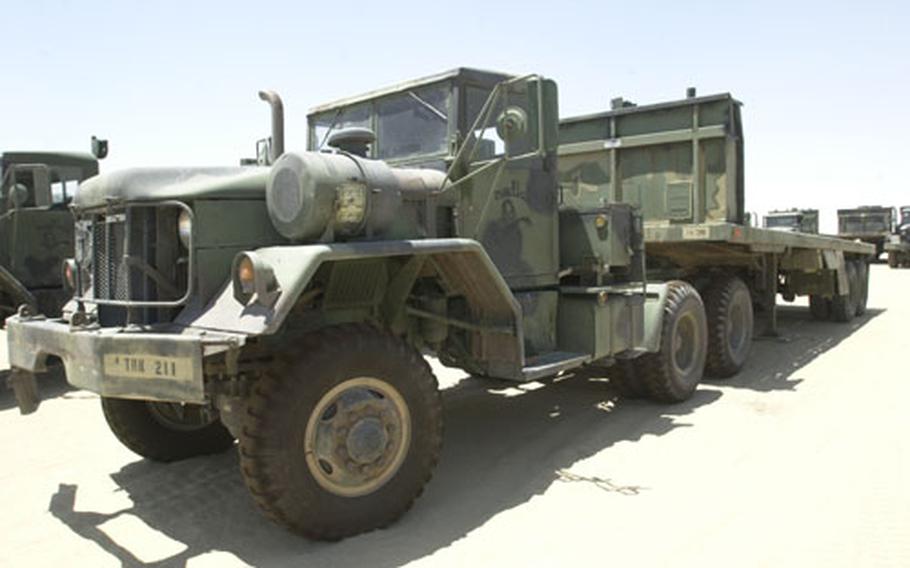 A fleet of 1950s M818 trucks is what the 1244th Transportation Company used to log more than 3 million miles in Iraq and Kuwait. The drivers said they prefer the old trucks over the newer air conditioned units the Army uses because they can take a beating. (Fred Zimmerman / S&S)

CAMP ARIFJAN, Kuwait &#8212; At nearly 50 years of age, the hardest working members of the 1244th Transportation Company have proved they can do everything their younger counterparts can do, and then some.

The 1244th, an Illinois National Guard unit from North Riverside, is one of only two units currently supporting Operation Iraqi Freedom II that uses the old M818 semi-trucks, according to Capt. Rhonda Petersen, unit commander. The trucks rolled off the assembly line in the 1950s.

But age hasn&#8217;t stopped the unit from chewing up roads in Kuwait and Iraq.

According to one transportation specialist, or driver, the unit&#8217;s good fortune has been because of how they operate.

What also helps missions run smoothly are the 17 mechanics. Petersen said the wrench turners were working 16 to 18 hours a day the first six months in Kuwait.

Sgt. Andrew Lang, one of the mechanics, said that during those first months, they virtually had no parts for their vintage trucks.

Even when they got parts, they still had to get creative. Lang said the mechanics were doing maintenance one level above what most were trained to do and didn&#8217;t always have the right tools. They would borrow from other units or improvise to get the job done.

Because the trucks are so old, fellow mechanic Spc. Matthew Palm said, the unit has scrapped 10 percent of its fleet due to problems such as blown engines or bad transmissions.

Sanchez said it seemed as though the trucks knew when they were on a mission in Iraq, and would perform almost perfectly.

One advantage the mechanics have here is the heat. Palm said that when the unit was mobilized, 30 percent of its trucks went down because of the cold weather of northern Illinois. He said it was a three-hour project just to get the trucks started because the diesel fuel would gel in the lines.

The drivers of the 1244th seem to prefer the older truck to newer versions, even though their vehicles don&#8217;t have air conditioning.

Petersen said she&#8217;s proud of the soldiers in her unit for coming together and working hard. She said the unit may be home soon &#8212; it has a flight date for late July. But, she said, this is its fourth flight date, and there&#8217;s always a possibility the unit could be extended.

Sgt. Donald May, transportation specialist, said he prefers the old trucks to the new because they&#8217;re tougher and don&#8217;t get stuck in the sand as easily.