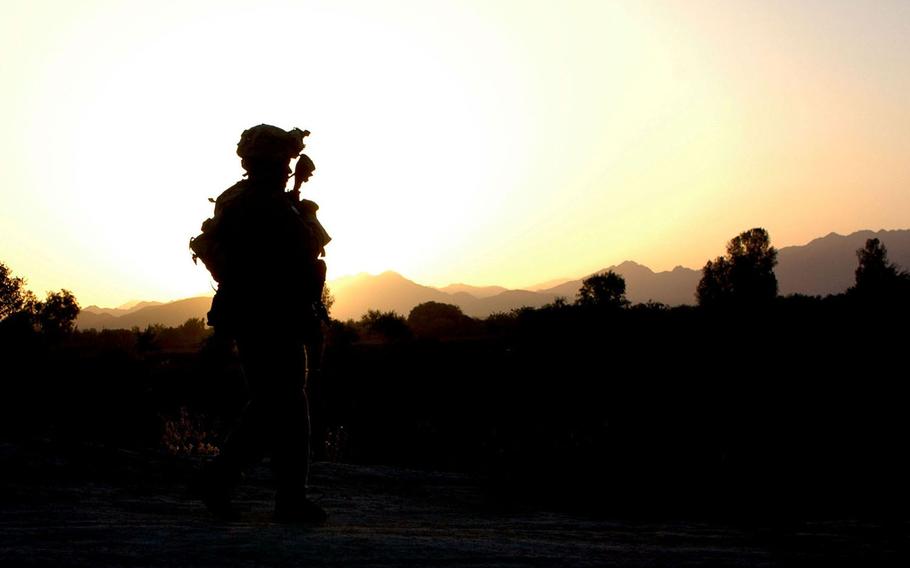 A U.S. soldier goes on patrol at sunrise in Sangin Valley, Afghanistan, in May 2004. Today, most of Sangin district, where scores of British and American troops died during the 14-year NATO-led military mission in Afghanistan, is in control of the Taliban, according to local officials and journalists. (Tony J. Spain/U.S. Army)

KABUL, Afghanistan — A key district in one of Afghanistan’s bloodiest battlegrounds, Helmand province, is on the verge of collapse to the Taliban, officials said Monday.

Most of Sangin district, where scores of British and American troops died during the 14-year NATO-led military mission in Afghanistan, is in control of the Taliban, according to local officials and journalists. Government control has been reduced just to several buildings in the district center, and the provincial capital is also under increasing pressure.

Most of the local government and security forces in Sangin have retreated to an Afghan National Army base in the district center, where they are surrounded, running out of ammunition, food and fuel, and unable to evacuate wounded and dead troops, Sangin district Gov. Suleiman Shah said when reached by satellite phone. The sound of gunfire could be heard in the background.

Shah said the insurgents were hiding in shops when helicopters came overhead, making airstrikes impossible and that none of the helicopters had dropped desperately needed supplies to their compound.

“Now there is a very urgent need for support. We don’t have enough ammunition; we are running out, and it will be chaos if support doesn’t arrive soon,” he said. “Everyone will get killed.”

That seemed to contradict Afghan Ministry of Defense spokesman Gen. Mohammad Radmanish, who said his forces had air-dropped supplies to Afghan security forces in the battle. “We have also carried out air attacks and we are planning to get all the district secured very soon” he said.

Shah said he could hear the screams of a badly injured Afghan soldier desperate to be evacuated and he hoped help would come before the insurgents, who he said have night vision equipment, began their nighttime assault.

There were conflicting casualty reports, but local officials said dozens were killed and many more were wounded in the past few days of fighting in Sangin. Shah said the compound he was in was littered with bodies.

On Saturday, Helmand provincial Deputy Gov. Mohammad Jan Rassouliyar took to Facebook in a personal plea to Afghan President Ashraf Ghani to send help to the province. He also said coalition forces on the ground were simply observing, rather than assisting Afghan forces.

“I’m out of options, which is why I chose social media for this,” he wrote. “Helmand is standing on a precipice and it needs your urgent visit.”

In the post he also echoed widespread fears that unlike in Kunduz, a northern city the Taliban overran in late September but which was recaptured relatively quickly, a Taliban victory in Helmand would be lasting.

“Helmand is not Kunduz where you can start a counteroffensive from the airport and recapture it,” he wrote. “Recapturing of the province would be nothing but a dream.”

Coalition officials did not immediately comment on what role, if any, American or other foreign troops and air support are playing in the latest fighting.

Helmand province, part of the Taliban’s heartland and the center of Afghanistan’s lucrative, illicit opium production, has been under siege for months. U.S. special operations troops are on the ground to help Afghan forces repel insurgent attacks. Taliban fighters have reached the outskirts of the provincial capital, Lashkar Gah, raising fears they could take control of the province.

Afghan Chief Executive Abdullah Abdullah, who shares power with Ghani, announced Monday on Twitter that he was convening an emergency security meeting.

A spokesman for Ghani did not answer his phone Monday.

Helmand has been, by far, the deadliest province for coalition troops since the U.S. invaded the country in 2001, accounting for nearly 1,000 deaths, according to iCasualties.org. American Marines and British troops, especially, saw some of the fiercest fighting of the war in the province. While sparsely populated, it has been a stronghold for the Taliban as well as a source of revenue for both insurgents and criminals who profit from the opium trade.