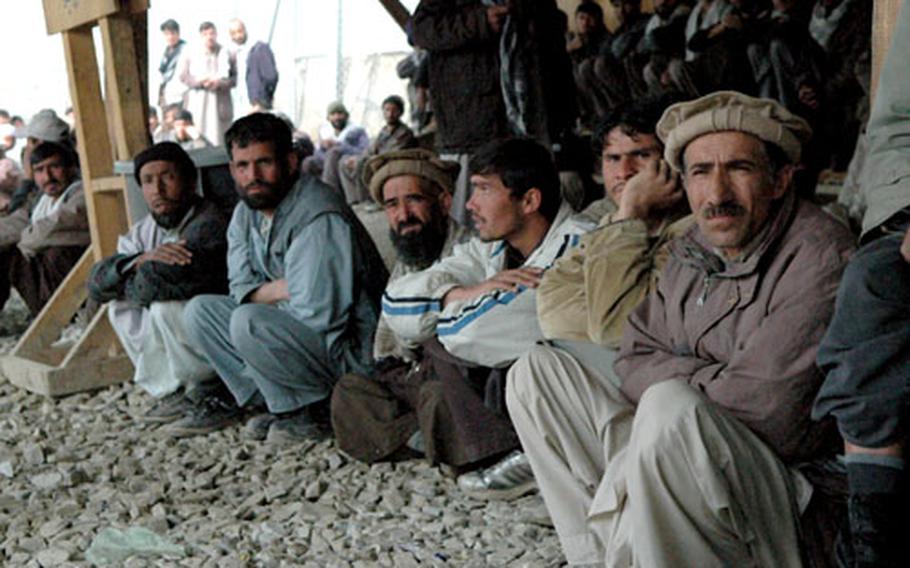 The waiting area outside Bagram Air Base in Afghanistan is full of aspiring day laborers, many who wait all day for work. CIA estimates place the unemployment rate at 40 percent; a recent U.N. estimate says it’s as high as 78 percent. (Anita Powell / S&S)

The waiting area outside Bagram Air Base in Afghanistan is full of aspiring day laborers, many who wait all day for work. CIA estimates place the unemployment rate at 40 percent; a recent U.N. estimate says it’s as high as 78 percent. (Anita Powell / S&S) 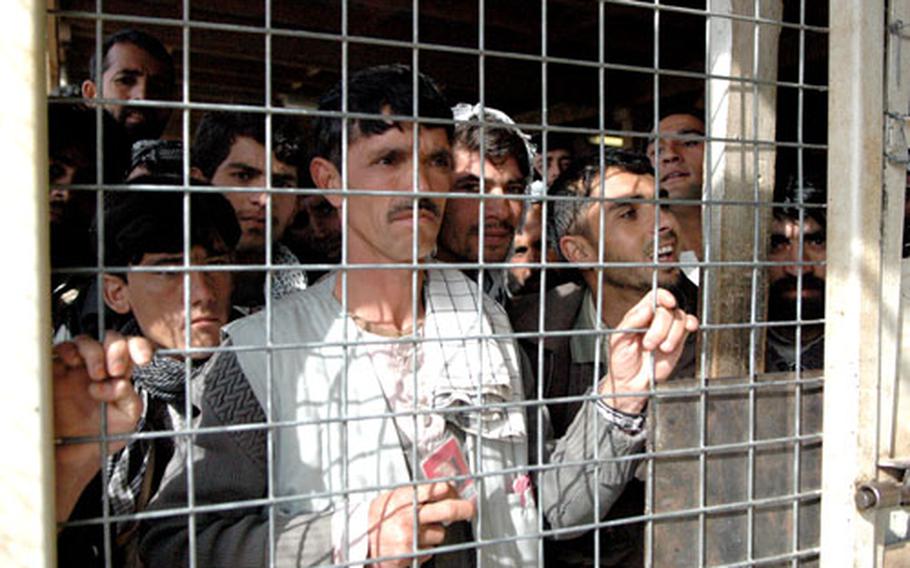 Another day, no dollar: Abdul Hanan, center in white, waits behind a fence at the entrance to Bagram Air Base, Afghanistan. (Anita Powell / S&S) 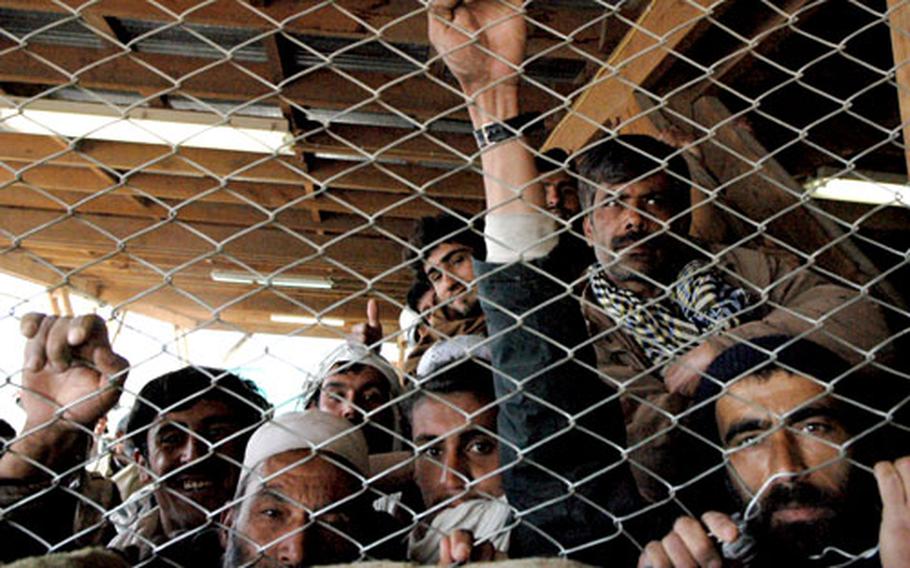 BAGRAM AIR BASE, Afghanistan &#8212; Every morning for the last two months, Abdul Hanan has come to the gates of Afghanistan&#8217;s largest American base looking for work.

And every evening, the 30-year-old father of six walked away empty-handed.

During those long days, he and about 350 other men &#8212; from hopeful 15-year-old boys to wizened grandfathers &#8212; wait patiently in a fenced area, gazing imploringly at American guards, hoping to be one of the 150 to 250 workers admitted each day for the daily wage of about $4. The work is basic, unskilled: cleaning, digging, manual labor. Any movement toward the waiting area &#8212; a soldier opening the door, an approaching visitor &#8212; triggers a near-stampede of workers, many of whom rush to the chain-link fence and eagerly press against it.

In Taliban times, he said, he worked in Pakistan.

At Bagram, the truth is somewhere in the middle: Of the 350-some waiting workers, between 150 and 250 make it in every day, said Capt. Trace Major, who oversees contracting operations for the 111th Area Support Group. Additionally, an estimated 500 men, all of whom lack the security credentials to get closer to the base, cluster daily around an Afghan checkpoint in Bagram looking for work on base.

Locals at Bagram universally complain that work has become harder to find since the American invasion of Afghanistan in 2001, a claim that&#8217;s hard to judge, as reliable unemployment figures are unavailable. However, in 1995 &#8212; which until 2005 was the most recent year for which figures were available &#8212; the CIA estimated that only eight percent of eligible workers in Afghanistan were unemployed.

Hanan, a former Northern Alliance soldier who looks at least a decade older than his 30 years, said he has exhausted local job possibilities.

He conceded that there are opportunities to earn money from anti-American forces, but, like many men appealing to the Americans for work, his hatred of the Taliban eclipses his desire for money.

But like many others, he was quick to pin a different culprit for his current problems.

Those thoughts were echoed by locals both inside and outside the gate.

A one-legged man who gave his name as Shaker, who has a regular job writing down names of day workers, said he also believes the solution lies in American hands.

Base officials say they&#8217;re doing what they can.

Currently, the base spends about $30,000 a month on day labor, said Sgt. Nathaniel Adamson, a member of the 111th Area Support Group who works closely with many of the day laborers.

Hanan, when asked to propose a solution, simply raised his hands in exasperation.