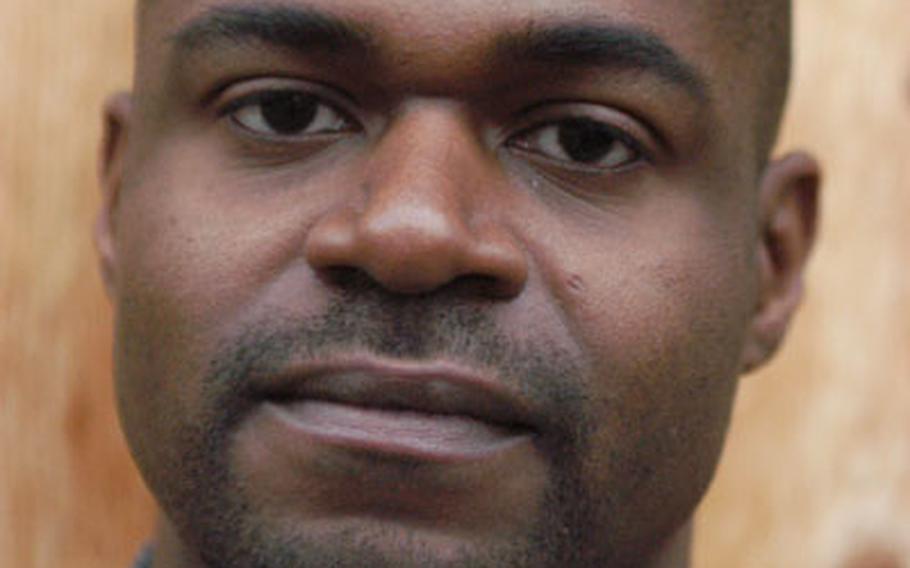 Buy Photo
U.S. Army Spc. André L. Shepherd, an Apache helicopter mechanic from Katterbach, Germany, has been AWOL from his unit since April 2007. He asked the German government for political asylum in November 2008. (Kevin Dougherty/Stars and Stripes)

MUNICH, Germany &#8212; A U.S. soldier who deserted the Army 18 months ago to avoid a second tour to Iraq has asked the German government for political asylum, making him the first U.S. servicemember to take that legal and political step in Germany over the war on terrorism.

Army Spc. Andr&#233; L. Shepherd submitted his petition Wednesday to a German federal office in Giessen that handles migration and refugee issues. Worried the Army might attempt to arrest him, Shepherd didn&#8217;t publicly disclose the time and place of his filing until he held a press conference Thursday in Frankfurt.

In a seven-page letter written earlier this year for his attorney, Shepherd stated he wanted "to walk away from the Army and, more to the point, my country." The Apache helicopter mechanic from Cleveland wrote of not wanting to be "an instrument of destruction" and of the "imperial actions of an America gone horribly wrong."

The press conference went smoothly for Shepherd who was not apprehended.

At a gut level, Shepherd said, it&#8217;s difficult to ask another nation to protect you from your homeland.

The petition sets the Status of Forces Agreement between the United States and Germany on a collision course with various laws and agreements involving NATO, the European Union and the Geneva Conventions, according to Reinhard Marx, a Frankfurt-based asylum lawyer representing Shepherd.

Because of his petition for political asylum, Shepherd "enjoys the protection of the Geneva Convention," Marx said at the news conference.

A spokesman for U.S. Army Europe said late Wednesday the command had just learned of the asylum case hours earlier.

"We know nothing about it," other than a news release that came out announcing the press conference, said Bruce Anderson. "We&#8217;re waiting for the facts."

Shepherd&#8217;s request for political asylum puts the United States and Germany in uncharted waters. The countries have much in common in the cultural, business and military arenas, but Germany has been a steadfast critic of the Iraq war. While German lawmakers in recent years have made it harder for an Ausl&#228;nder &#8212; or foreigner &#8212; to seek asylum, the threshold isn&#8217;t insurmountable.

"No one knows how the German government will handle the case," Marx said earlier this week.

The asylum request, the first of its kind since the Vietnam War according to Marx, is fraught with military and diplomatic land mines. For one, Germany is home to dozens of Army and Air Force installations, from which tens of thousands of servicemembers funnel through en route to Afghanistan or Iraq every year.

Historically, Canada has been the most likely destination for a U.S. servicemember contemplating political asylum while looking to avoid a deployment. That was especially the case during the Vietnam War, when thousands of draftees headed north. But the door to Canada doesn&#8217;t swing like it used to, and it no longer is the only primary option for those of Shepherd&#8217;s persuasion.

Instead, servicemembers of the current combat era are just as likely to apply to the Army for conscientious objector status. In fiscal 2007, 4,698 soldiers deserted the Army, according to Maj. Nathan Banks, a Pentagon Army spokesman. The latest figures for fiscal 2008, show a decrease, down to 3,559.

In a recent interview, Shepherd said he didn&#8217;t want to go the route of a conscientious objector because it would have meant renouncing all wars, something he refuses to do. His beef is with the so-called war on terrorism, particularly in Iraq.

Shepherd was slated to deploy to Iraq in 2007 as a member of the 412th Aviation Support Battalion, headquartered in Katterbach, Germany. The 31-year-old joined the Army in January 2004 and served six months in Iraq, from September 2004 to February 2005. As a helicopter mechanic, Shepherd didn&#8217;t regularly step outside the wire at Forward Operating Base Speicher, near the city of Tikrit in northern Iraq.

Upon his return, Shepherd said he began researching the lead-up to and execution of the war. He concluded the war was "a fraud," but figured that with his unit in a period of reorganization he might be able to fulfill his enlistment without returning downrange.

But on April 11, 2007, with deployment orders to Iraq looming, Shepherd left for "vacation" in the dead of night and didn&#8217;t return, except once to pick up a few belongings. His unit left without him a couple of months later.

Shepherd decided to surface now because his battalion is back in Katterbach after a 15-month tour.

Before his company deployed, Shepherd "worked in the orderly room, and he was OK," said Maj. Harold Demby, the soldier&#8217;s company commander. From what Demby observed, Shepherd was "a quiet soldier who didn&#8217;t say a lot," though he sensed there may have been some maturity issues.

Shepherd was "not sure what he wanted to do" with his life, Demby said in a brief phone interview.

Through intermediaries, Stars and Stripes interviewed Shepherd several days before he filed for political asylum. The meeting occurred in an isolated house in the Bavarian countryside, not far from the Austrian border.

"Welcome to the Outback," said a man named Dieter, the homeowner.

At the behest of two reporters, Shepherd donned his camouflage uniform for pictures. It was a loose fit.

"Nobody knows how America will react," Shepherd said of his upcoming petition for political asylum. "Nobody knows what will happen."

The start of the process

Shepherd had begun to pack his bags, figuring that like any other asylum-seeker in Germany he would be sent to one of several refugee reception centers.

On Wednesday, as Shepherd was being processed at the facility in Giessen, Marx would not disclose which reception center his client had been assigned. Marx later furnished a copy of the 29-page brief that he submitted to the Giessen office, which serves as Germany&#8217;s clearinghouse for political asylum requests.

Filing such a petition, Marx said, "does not automatically mean you give up your citizenship."

In the legal brief, written in German, it stated that Shepherd "does not want to participate in a war that is against international law," citing Article 2.4 of the U.N. charter. It also invoked the possibility of him being accused of "war crimes," which he did not want to be a party to.

"For the decision he made, he would have to face charges by a military court with authority over him," the brief continued. Additionally, "the applicant for political asylum is afraid of prosecution under the Geneva Convention."

Shepherd suspects his case could take a few years to sort out, based on what Marx has told him. But the case also could be dispatched within short order, which probably wouldn&#8217;t bode well for him.

"I don&#8217;t want to be punished for making the right decision, or standing up for what I believe in," Shepherd said as he sat at a pinewood table in the sparsely furnished kitchen.

"It will be a protracted battle because America has a lot to lose, and Germany will have a ticking time bomb on their hands."

Such inflammatory comments aren&#8217;t at all unusual for Shepherd, not at this stage in his life. While his old company commander was reluctant to go into details about the soldier&#8217;s post-deployment problems, Shepherd wasn&#8217;t.

After he returned from Iraq in 2005, Shepherd said his "entire personality took a massive, massive nose dive." He drank heavily and argued with his superiors. In August of that year he received an Article 15, a form of nonjudicial punishment.

Unit leaders "didn&#8217;t know what was wrong with me," Shepherd said, "but they wanted to help me all the same."

Life in the shadows hasn&#8217;t been all that gloomy for Shepherd. He has a German girlfriend, several friends and a day-to-day existence, that, at least until this week, seems normal on the surface. He got out, shopped and even took in an occasional movie in a nearby theater. Only twice did he have to talk his way past the local police.

Glimpsing at his military ID, which has yet to expire, it&#8217;s clear Shepherd has dropped weight, at least 15 pounds by his estimate. He attributed the loss to eating less and walking more. Driving a car, he said, is a rare treat because to do so leaves him exposed, particularly if he is involved in an accident. So he walks just about everywhere.

"This is a life-changing moment," Shepherd said. "We know the risk we face."

Shepherd has a polite, passive demeanor. He&#8217;s quick with a smile, but his dull staccato laugh seems like a nervous tic. The habit predates his enlistment, Shepherd said.

Prior to enlisting in the Army, Shepherd attended college but had to drop out his last year because he had no money. He has worked several different jobs, from being a courier and a fast-food restaurant manager to landscaping and selling vacuum cleaners door-to-door.

Shepherd was also homeless a couple of times, sleeping in the backseat of his car at night.

When he joined the Army, his mother worried but his father was proud. He&#8217;s not sure what their reaction will be to his request for political asylum.

"It&#8217;s a difficult situation for my family," Shepherd said.