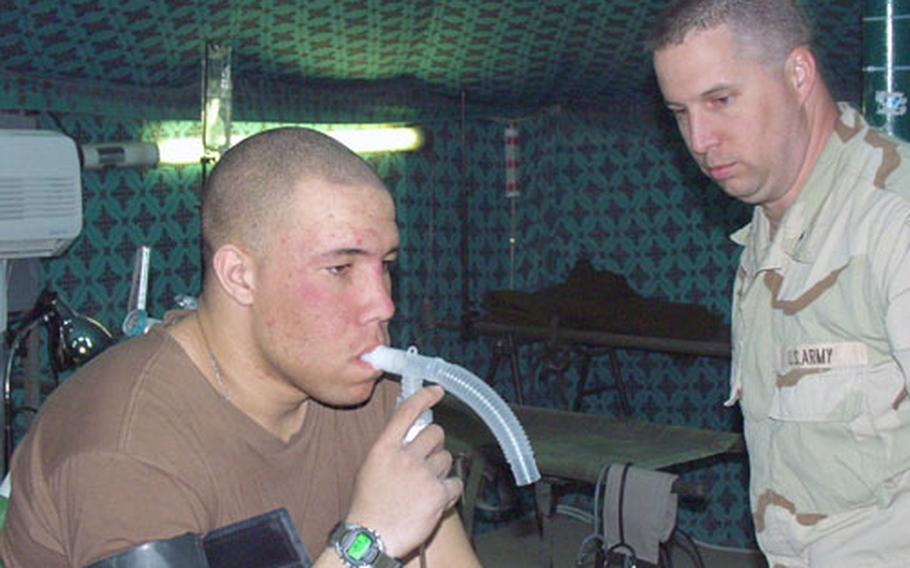 Pvt. 2 Matthew Still, 21, of Mt. Laurel, N.J., inhales a combination of the decongestant Albuterol and oxygen in the medical tent at Camp New York, Kuwait. The soldier, from the 1st Battalion, 6th Field Artillery, is suffering from dust-induced bronchitis, which is epidemic among troops newly arrived in Kuwait. With Still is Sgt. Paul Soulier, 37, a medic with the Alabama National Guard&#39;s 161st Area Support Medical Battalion. (Steve Liewer / S&S)

CAMP NEW YORK, Kuwait &#8212; For Pvt. Matthew Still, the trouble began last weekend with a tickle in his throat, along with a cough that kept him awake nights and made him sleepy during daytime weapons training in the Kuwaiti desert.

He did his best to ignore it, but the damp, chilly wind and the blowing desert dust only made things worse. Within three days, he had a full-blown case of what medics here call the &#8220;Kuwaiti crud,&#8221; a sand-induced case of bronchitis that can turn nights into a hacking hell.

After three days, he visited the three-bed medical tent at Camp New York, where medics treated him with the decongestant albuterol, which is mixed with pure oxygen and ingested through an inhaler they call the &#8220;peace pipe.&#8221; But one of Still&#8217;s lungs wouldn&#8217;t clear completely, so the doctor sent him to the combat support hospital at nearby Camp Udairi for overnight observation.

Still&#8217;s experience with the &#8220;Kuwaiti crud&#8221; has become practically a rite of passage for soldiers en route to Iraq. With every new deployment, large numbers of soldiers fall victim to a form of bronchitis caused by prolonged exposure to the fine desert dust.

Sgt. Paul Soulier, 37, a medic at Camp New York from the Alabama National Guard&#8217;s 161st Area Support Medical Battalion, said the main medical tent is treating several dozen soldiers each day at the camp, which is the temporary home of about 9,500 soldiers and Marines. About 30 more patients go to battalion aid stations.

In February, Soulier said, about two dozen cases grew serious enough to evacuate soldiers to the 801st Combat Support Hospital in Kuwait City or, in a few cases, back to Germany.

He said the fine desert dust found in Kuwait penetrates the lungs and interferes with their ability to clear impurities. The symptoms are the same as a chest cold. At this time of year, the cold winds, dampness and sandstorms make things worse.

Smokers and allergy sufferers are susceptible, too.

Soldiers in the 1st Infantry Division are hurting now, but they are far from the first. Soulier said in his 10 months in Kuwait he has seen troops from the 82nd Airborne, 101st Airborne and 1st Armored divisions come down with the &#8220;crud.&#8221; A year ago, 11th Aviation Regiment and 12th Aviation Brigade soldiers from Europe endured the same thing.

Avoiding sand in these dusty desert camps is out of the question. Combat medics advise soldiers to stay warm, cover their face with a cloth, and stay inside as much as possible during dust storms. They urge them not to smoke, a habit many soldiers revert to here because of stress and boredom. Frequent hand-washing reduces the spread of the germs.

&#8220;Sometimes the command sergeant major is as much of a preventative health officer as anyone else,&#8221; West said.

The good news, Soulier said, is that the &#8220;Kuwaiti crud&#8221; goes away like any other cold, and it usually doesn&#8217;t recur when soldiers adjust to the new conditions. In Iraq, where most soldiers and Marines now in Kuwait will soon head, the problem is less serious.