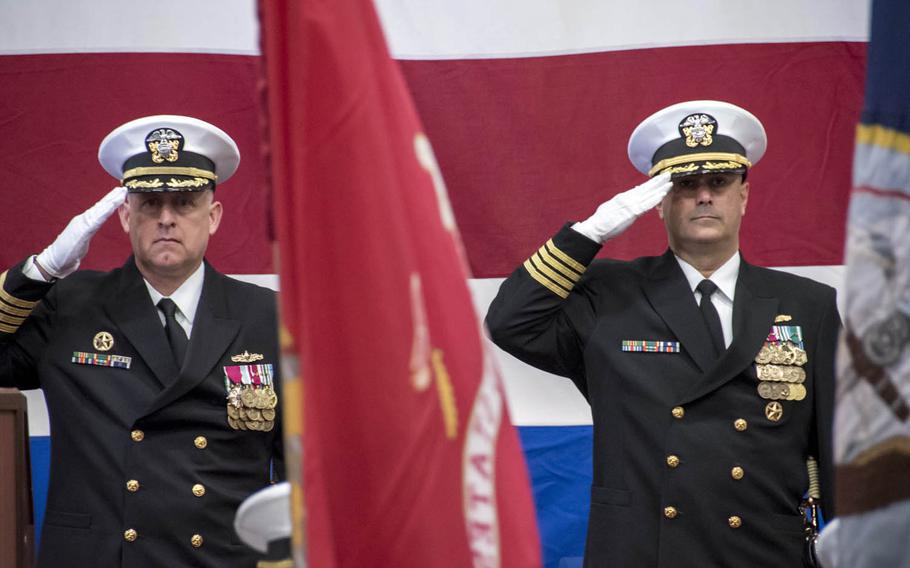 Doyon replaced Capt. Marvin Thompson, who will remain at Sasebo to serve as deputy commander of the 7th Fleet’s Amphibious Force.

“Amphibious Squadron 11 operates in one of the most dynamic theaters in the world. Your tour as commodore has reflected that,” Dalton told the outgoing leader, according to a Navy statement. “You deserve a great deal of credit for instilling a culture of readiness and an expectation for sound execution at all times.”

Thompson, a Maryland native, led the Bonhomme Richard Amphibious Ready Group and the 31st Marine Expeditionary Unit through numerous bilateral exercises and humanitarian-assistance operations. On his watch, the squadron helped the people of Saipan after Typhoon Soudelor devastated the island, and worked with the Japan Self-Defense Force to provide aid after last year’s earthquakes in Kumamoto.

“The ARG-MEU team, along with the expeditionary strike group staff, have been a ready force to project power as required, but we are always ready to assist those in need as well,” Thompson said at the ceremony. “We are proud of our stabilizing influence in this region, and along with our partners, we will continue to maintain peace and stability by always being ready.”

Doyon, of San Antonio, Texas, has been serving as the squadron’s deputy commander.

“This [amphibious ready group] has had a lot of successes under Capt. Thompson and has done great things over the years,” he said. “I am honored today to take command of Amphibious Squadron 11 and an incredible group of ships.”

The Bonhomme Richard will eventually be replaced by the USS Wasp, an amphibious-assault ship capable of supporting the next-generation F-35B Lightning II fighters that arrived at Marine Corps Air Station Iwakuni this week.

The Bonhomme Richard will remain in Sasebo with Wasp for an undetermined period in 2018 before heading to its new home in San Diego, where the ship will undergo maintenance and upgrades.