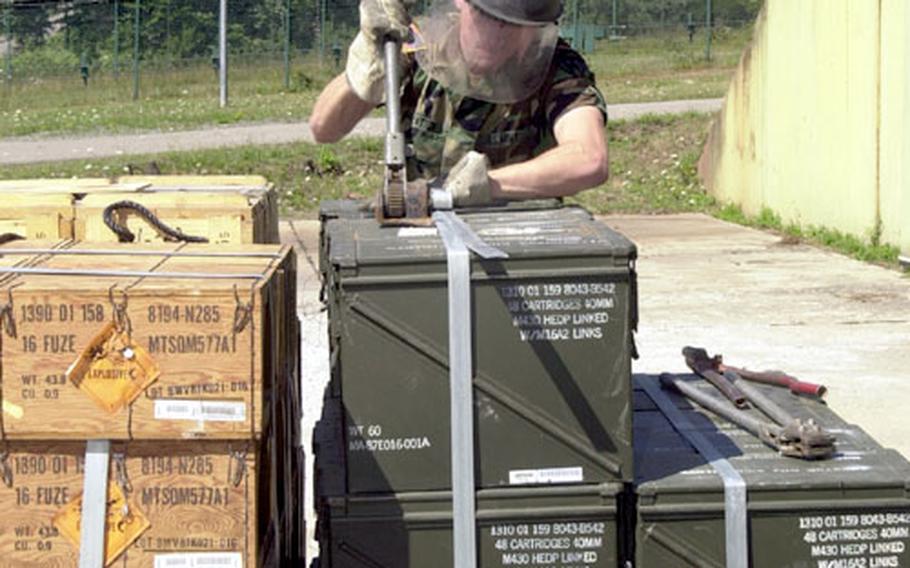 Pvt. Jonathan Patton of the 23rd Ordnance Company secures ammunition crates that will be used by the 1st Armored Division when it heads to Iraq later this year. (Steve Mraz / S&S)

KAISERSLAUTERN, Germany &#8212; Before the bullets go through the bad guys, the rounds go through ammunition depots in Miesau and Weilerbach, Germany.

Recently, as much as 90 percent of the small-arms ammunition bound for operations Iraqi and Enduring Freedom was supplied by Miesau Army Depot on the western edge of the Kaiserslautern military community. While Ammunition Supply Point 8 in Weilerbach normally supplies training ammunition for units, it can also provide ammunition for deploying units.

The ammo covers a broad spectrum that ranges from 9 mm rounds to Hellfire missiles.

&#8220;On the battlefield, you can last a day without water, a week without food, but not a second without ammunition,&#8221; said Chief Warrant Officer 3 Darlene Gibson, accountable officer at Ammunition Supply Point 8. &#8220;We stick to heart with that around here. We take it very seriously.&#8221;

Since 2001, the 191st Ordnance Battalion, which runs both Miesau and Ammunition Supply Point 8 in Weilerbach, has sent more than 500 palettes of ammunition downrange in support of the global war on terrorism.

When units from the Vicenza, Italy-based Southern European Task Force went into Iraq during the beginning of OIF, they were supplied with ammunition from the 191st Ordnance Battalion.

In April 2004 when insurgents disrupted the main supply route from Kuwait to Baghdad, soldiers with the 23rd Ordnance Company at Miesau prepared 150 palettes of ammunition for delivery directly into Baghdad.

On Wednesday morning, Staff Sgt. Harvey Martinez with the 23rd Ordnance Company talked about a palette that had just been prepared containing fuses and 40 mm ammunition. The 1st Armored Division will use the ammunition when its units deploy to Iraq later this year.

Overall, the soldiers take their mission of providing ammunition to troops downrange seriously.