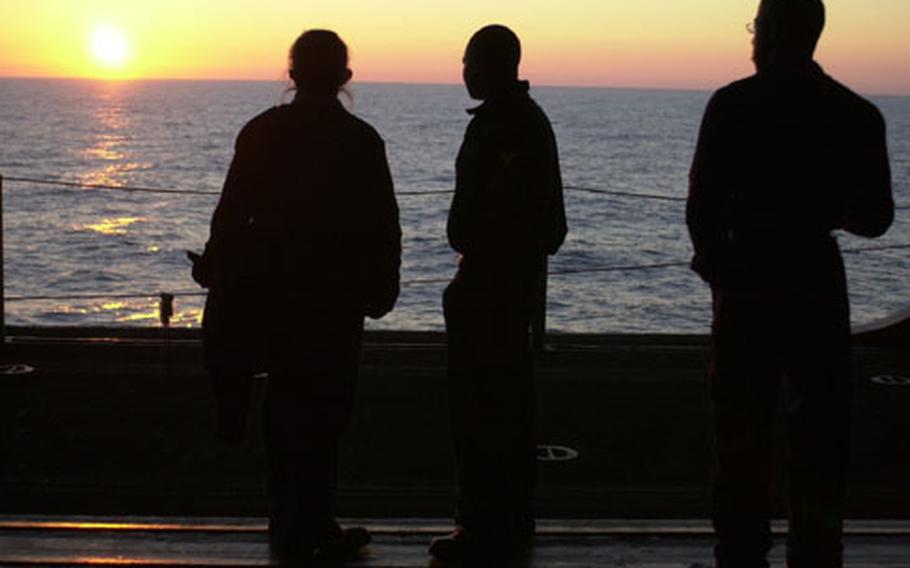 Sailors enjoy a sunset earlier this month from the hangar bay of the USS Bataan. The amphibious assault ship is on its way to the Persian Gulf to supply Marines as part of the largest rotation of U.S. forces since World War II. (Scott Schonauer / S&S)

Sailors enjoy a sunset earlier this month from the hangar bay of the USS Bataan. The amphibious assault ship is on its way to the Persian Gulf to supply Marines as part of the largest rotation of U.S. forces since World War II. (Scott Schonauer / S&S) A Marine aboard the USS Bataan works on a CH-46 Sea Knight helicopter with the New River, N.C.-based Marine Medium Helicopter Squadron 261 while the amphibious assault ship travels through the Suez Canal on Monday. (Scott Schonauer / S&S) A U.S. sailor scans the horizon as the USS Bataan travels through the Suez Canal on Monday. (Scott Schonauer / S&S)

ABOARD THE USS BATAAN &#8212; Few warships have been as busy as the USS Bataan since the Sept. 11, 2001, attacks against the United States.

The Bataan is on its third deployment in three years, cruising through the Red Sea this week toward the Persian Gulf region to drop off members of the II Marine Expeditionary Force and their equipment. The Marines are headed to Iraq as part of the largest rotation of U.S. troops since World War II.

Petty Officer 1st Class Josh Lubkeman, who joined the Bataan in 1998, has gone on four deployments with it and has traveled at least 100,000 miles, enough to travel around the world four times.

He has missed birthdays, anniversaries, holidays and times when his family desperately needed him. He said he&#8217;s grateful he has a strong marriage, but the time away is a strain on the strongest relationships.

Most of the Marines on board are from helicopter units. While the Marines will be going for a seven-month tour, the Bataan deployment should end in another one and half months.

It is the second unscheduled deployment to the region.

Last year, the Bataan deployed to the gulf as part of a seven-ship amphibious task group to help support the war in Iraq. The ship carried only AV-8B Harrier jump jets and was known as the &#8220;Harrier Carrier.&#8221;

The deployments have tested crewmembers and their families, but many said they take it in stride in this post-Sept. 11 world of no-notice deployments and greater time at sea. Petty Officer 2nd Class Blake Hoyt, 22, of Baton Rouge, La., said the greatest challenge on a cruise is &#8220;trying to keep your sanity.&#8221;

Petty Officer 2nd Class Michael Tredway, 22, of Ashtabula, Ohio, worries about his wife at home. Since they got married on Dec. 21, 2002, he figures he has seen his wife for a total of about six months. He was on his honeymoon when his chief petty officer called and told him the ship was heading to war.

Cmdr. Kieran Mandato, a Catholic priest who serves as the Bataan&#8217;s chaplain, often deals with the problems at home brought on by long sea duty. He is a spiritual adviser and sometimes just someone sailors can go to and vent.

The ship doesn&#8217;t track the number of divorces its sailors go through, but Mandato knows of at least a dozen last year.

Mandato and chaplain Lt. j.g. Dean Van Brunt are available for counseling and help for the sailors. But marriage counseling can be difficult when the other spouse is thousands of miles away.

So, supervisors put an emphasis on solving personal issues before they deploy and maintaining communication with loved ones back home. E-mail is available during downtime, and there are phones available for sailors to make quick calls with a calling card.

But some situations require more than a phone call or an e-mail.

During last year&#8217;s deployment, Lubkeman&#8217;s 3-year-old son got sick and later died of an undetected virus.

On Feb. 17, his wife made the tragic discovery. She got up that morning after taking him to the doctor and found their son in the living room lying on his favorite pillow.

The ship allowed Lubkeman to go home, but it took four days to get to Norfolk. On the anniversary of their son&#8217;s death, the Lubkemans will be apart &#8212; again. In addition, his wife is pregnant with their third child and caring for their 1-year-old son.

During the difficult times, sailors said they rely on their onboard family.

Chief Petty Officer Jeffrey Niles said he doesn&#8217;t dwell on how much time he has been away from his wife and daughter. How long he has been at sea only brings him down, he said.

He is the leading chief for the combat systems department, which is essentially responsible for all the electronics on the ship. He supervises 42 sailors and does his best to keep them focused on the mission even though some have been at sea more than they have been at home.

This is his third deployment in four years.

The pace of deployments have had their advantages.

Capt. Earle Yerger, the Bataan&#8217;s commanding officer, said the number of deployments has made his job easier in some ways. He deals less with some of the little things. Sailors don&#8217;t get in trouble as much. The adjustments that typically come with leaving a homeport are few. Sailors are more prepared for what is ahead because they&#8217;ve been there.

One of the reasons the Bataan has gotten the call so much recently is because of timing and the ship has been ready to go, he added.

Lubkeman, who will join the Joint Forces Command in Norfolk after his tour with the Bataan this year, isn&#8217;t soured by his experiences. He has gone from a seaman pay rate to a first class petty officer in six years &#8212; a remarkable accomplishment for most sailors.

He said he plans to stay in the Navy for 20 years, but welcomes shore duty for a change.