Both John and Mora Thomas of Lakeville, Minnesota, participated in the ADAPT program after John's return from deployment, and said the program gave them valuable parenting skills to use with their daughters, Claire, 4, seated, Isabella, 6, left, and Sophie, 9, after John returned from his deployment. Claire was plays with the ADAPT program binder at the family's home in Lakeville, on Wednesday, March 28. 2012. (Jeff Wheeler/Minneapolis Star Tribune)

Both John and Mora Thomas of Lakeville, Minnesota, participated in the ADAPT program after John's return from deployment, and said the program gave them valuable parenting skills to use with their daughters, Claire, 4, seated, Isabella, 6, left, and Sophie, 9, after John returned from his deployment. Claire was plays with the ADAPT program binder at the family's home in Lakeville, on Wednesday, March 28. 2012. (Jeff Wheeler/Minneapolis Star Tribune) Joe Vogel holds his son, Graydon, 2, on his lap after arriving home along with his other son, William, 5, left, Thursday evening, March 29, 2012. Joe and his wife, Molly, participated in a program conducted by researchers at the University of Minnesota that studies the impact of military deployments on families, particularly among Guard and Reserve members. (Jeff Wheeler/Minneapolis Star Tribune) 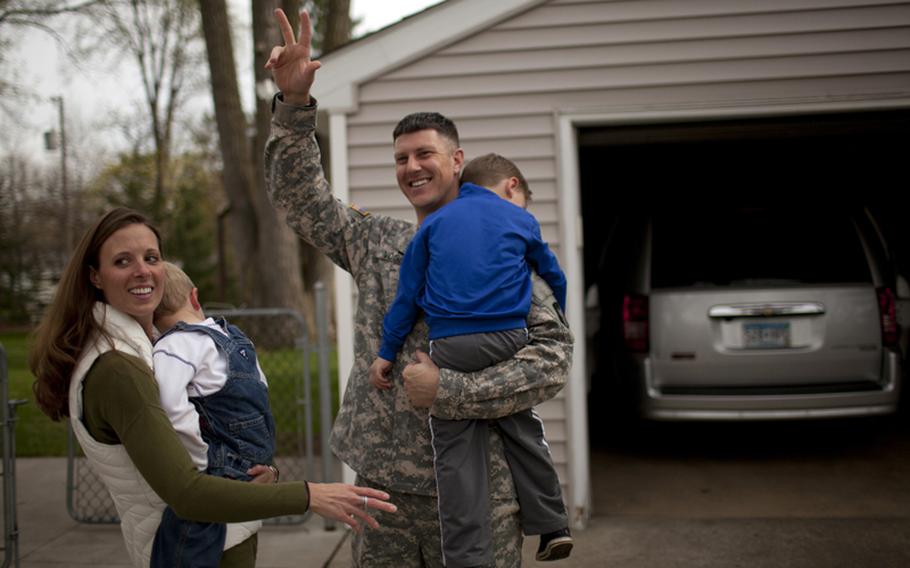 Joe Vogel waves to a passing neighbor after he arrived home after work with two very sleepy boys in tow. Molly, who arrived home first, holds Graydon, 2, and Joe carries William, 5, on Thursday evening, March 29, 2012. Joe and Molly participated in a program conducted by researchers at the University of Minnesota that studies the impact of military deployments on families, particularly among Guard and Reserve members. (Jeff Wheeler/Minneapolis Star Tribune)

MINNEAPOLIS &mdash; For the next four years, hundreds of military families in Minnesota will submit to wearing heart sensors to monitor the stresses they exert on each other and allow video cameras to record their interactions as part of an extraordinary first-in-the-nation look at the toll exacted by deployments to war zones.

The research, which is being conducted by the University of Minnesota, is aimed especially at gauging the impact on families of Guard and Reserve members, who have made up nearly half of the U.S. forces sent to Iraq and Afghanistan over the past decade. That number is unprecedented in modern American warfare and is likely to have a ripple effect on family life for years as soldiers return home and resume their civilian lives.

&ldquo;This is an important window. Minnesota has an opportunity to really share incredible knowledge that will help the next generation of reserve component families,&rdquo; said Abigail Gewirtz, an associate professor of family social science at the University of Minnesota and the project&rsquo;s principal investigator.

Minnesota&rsquo;s demographics work well for the research. Its mostly citizen-soldiers are generally older and more likely to have families than those on active duty. And those families often blend back in to small towns and cities after a deployment without the support system that a military base offers.

But the research will do more than put military families under a microscope. It also is designed as a practical method for improving parenting skills, using a well-established model for parenting intervention and applying it to the special demands faced by military families. It is called &ldquo;After Deployment: Adaptive Parenting Tools,&rdquo; or ADAPT.

&ldquo;This is more about giving to our Guard families than it is about taking,&rdquo; said Thad Shunkwiler, the outreach coordinator for the program and a 12-year member in the Minnesota Guard.

The $3.2 million research project, funded through the National Institute of Drug Abuse and National Institutes of Health, will look at 400 families over a five-year period to see whether the parenting techniques they are taught will affect such things as their kids&rsquo; risk of substance abuse and behavioral and emotional problems. Participating families will be interviewed four times over the course of the research.

Between 10 and 18 percent of returning Iraq and Afghanistan troops are likely to have post-traumatic stress disorder. Compounding their stress, nearly one in five will return without a job. Previous research has shown that citizen soldiers have had higher levels of PTSD, drug use and other combat-related adjustment problems compared with active-duty personnel. The first year back for these soldiers can often prove more stressful for families than the actual deployment in a war zone.

&ldquo;They&rsquo;re helping us prepare for the future,&rdquo; said Maj. Aaron Krenz, chief of Deployment Cycle Support for the Guard.

The project is still in its infancy. But as a reflection of the lack of academic work in the subject, researchers have been fielding interest in embracing the program even before the results are known. Gewirtz recently heard from an Air Force general who wants to install the program at 25 air bases.

For the military families participating, the study is intensive: a 14-week commitment, with two hours each week meeting in church basements and community centers. As an inducement, dinner is served and child care is offered. A control group will be offered traditional resources for parenting.

After returning from a year in southern Iraq to his wife and two sons, Joe Vogel wasn&rsquo;t much interested in the idea of sitting on folding chairs and sharing his feelings.

But his brother, a psychologist who also is in the Guard, encouraged Vogel and his wife, Molly, to participate.

The couple thought they wouldn&rsquo;t qualify because they were doing well with their two boys, 5-year-old William and 2-year-old Graydon, and had the support of both their families. But they found the simple tools offered during the meetings subtly changed their parenting styles. They used charts to offer encouragement for good behavior and learned a technique for calmly confronting the boys at their own level to get them to pick up their toys.

&ldquo;Once you sign up and commit to it, we use it all the time,&rdquo; Molly Vogel said. &ldquo;Any family deals with stress and conflict, it&rsquo;s just normal part of day to day. When you take a spouse out of the equation for more than a year, rules and expectations change and are set differently.&rdquo;

The Vogels have confronted the unique nature of Joe&rsquo;s job with their boys &mdash; that sometime soldiers don&rsquo;t come home. Three members of the Minnesota Guard were killed during his deployment, and Joe wears a bracelet bearing their names.

&ldquo;These are soldiers that died,&rdquo; William said, slouching on the couch and eating a frozen treat.

Researchers recruit at Guard and Reserve events, welcome-home celebrations and through social media. Participants are screened in an initial interview that includes parents and children strapped to heart monitors to establish a baseline. They are presented stressful scenarios or play tasks, and observers videotape as the families react. The study is looking at children who are 5 to 12 years old, but the tools learned in the program are intended to be applicable for all families.

With three active daughters and two full-time jobs, John and Mora Thomas also were hesitant to commit to the program. To top it off, John, an aviator in the Naval Reserve, hadn&rsquo;t been deployed since he was on active duty more than eight years ago. But researchers encouraged them and they reconsidered.

A Naval Academy grad, John believed in the occasional spanking to discipline his daughters. But after going through the program, he is trying new techniques, such as escalating timeouts of five to 10 minutes or taking away something of value.

They find that they now get less backtalk from the kids, particularly with their oldest, 9-year-old Sophie. She has noticed a change, too.

&ldquo;They were acting nicer when it came to punishment,&rdquo; she said of her parents. And her own reaction? &ldquo;I didn&rsquo;t get as mad.&rdquo;

Now, the tools they have learned will become even more valuable. John just got word that he will be deployed this summer for a year as a pilot, flying Navy P-3 airplanes for reconnaissance and surveillance. Before they had children, John was deployed twice while stationed at naval bases in Maine and Florida. Sophie was only a few months old when he returned from his last deployment.

&ldquo;This should be a walk in the park, but I&rsquo;ve experienced it in a different way,&rdquo; Mora said. &ldquo;I had the support of a Navy community during those deployments. Here, that&rsquo;s my biggest concern. I&rsquo;m in middle-class suburbia, and nobody gets it.&rdquo;

The Thomases haven&rsquo;t told the girls of their dad&rsquo;s deployment. They plan a family meeting to break the news.