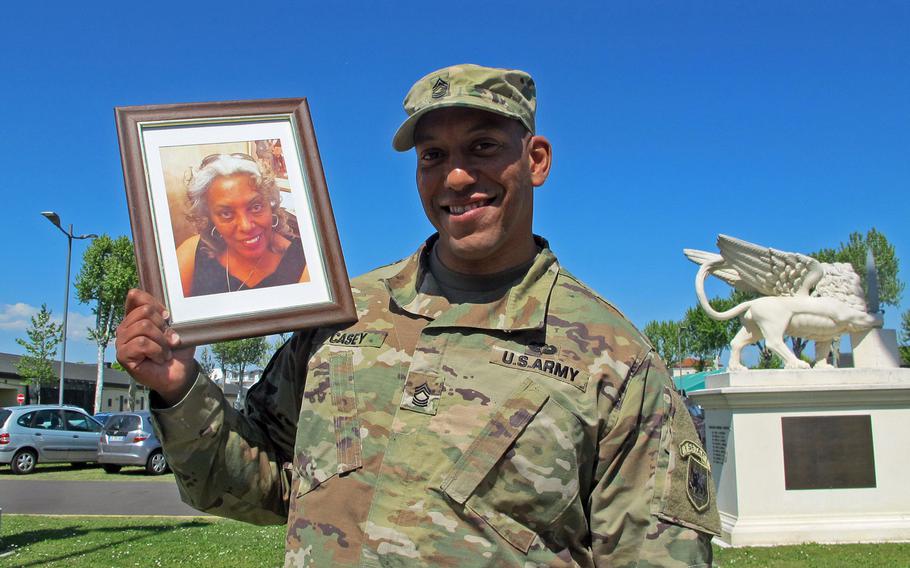 Sometimes soldiers go into war zones. Sometimes they’re sent to Hawaii. “It’s called ‘the needs of the Army,’” said Master Sgt. Bakaffa Casey. “If it so happens to be where you want to go, that’s awesome.”

For Casey, the Army’s needs coincided with the most sentimental of journeys, into the arms of his long-estranged mother in Ethiopia.

Casey, an information technology manager assigned to U.S. Army Africa, was among a group of USARAF soldiers who participated in last month’s Justified Accord exercise in the country’s capital of Addis Ababa. The annual exercise supports cooperation among East African nations participating in peacekeeping operations.

The visit was the first time Casey had seen his mother since 1999, when she returned home after living in the U.S. for 30 years. “It was a great reunion, right in the middle of the Addis Ababa Hilton,” he said. “I was all choked up. I cried, and I’m not a crier.”

The reunion ended 17 years of estrangement and resentment Casey felt after his mother’s departure left him heartbroken and rudderless at age 24, he said.

“I felt abandoned, I guess,” Casey said. “She left me with a car and some money, and I didn’t have direction or purpose. I couldn’t find my path.”

Enter the U.S. Army. Casey enlisted within weeks, after seeing the famous “Be all that you can be” Army commercial on television. He was sent to basic training at Ft. Benning, Ga.

“I started liking it right away,” he said. “I’ve been in the signal corps ever since. I think I found my purpose and my guidance and all that good stuff in uniform.”

But even as he made the Army his home — deploying several times to Iraq and Afghanistan, getting promoted, and getting married and divorced — Casey could not forgive his mother. “I didn’t talk to her for a long time. I had problems with her that I made up in my own head. I wish I had not spent so much time being stupid.”

Ferehiout Alemayehu Casey arrived in New York as an asylum-seeker in 1969 with two small children in tow. She met and married Casey’s father, Frank, a television reporter, and gave birth to Casey in 1975. When the couple divorced four years later, Casey moved with his father across the river to Teaneck, N.J.

His mother visited on weekends and the next year scraped the money together to take Casey and his siblings for a three-week visit to see relatives in Addis Ababa. But Casey, who’s well-versed in the history of Ethiopia — the only African country to defeat European colonial powers during the 19th century and retain its sovereignty — remembered little from the visit.

An orphan herself, his mother had a tumultuous relationship with her children, Casey said. She sometimes struggled to make a living. Before she returned to Ethiopia, she’d managed a North Carolina gas station and convenience store. “She got tired. North Carolina wasn’t like New York,” Casey said. “She wanted to be with her family, and so she left.”

Relations started to thaw at the urging of Casey’s wife, Crystal, whom he married in 2014. “She allowed me to see things in a different light,” he said. “At 41, I’m still learning lessons.”

He and his mother began talking more on the phone. Casey made sure that officials with USARAF, which he joined in 2015, knew that if an opportunity to go to Ethiopia presented itself, he was all in. As it happened, USARAF needed a communications manager for the March exercise.

The visit included seeing his mother’s home and meeting a variety of relatives. It changed everything. His mother, 69, who hasn’t laid eyes on either of her other two children or her grandchildren since her return to Ethiopia, now has an airplane ticket to Dallas, Texas, for another mother-child reunion in June. She’s going to see the grandchild she last held as an infant graduate from high school.

“What happened by my mother and I sharing the moment, it opened her up to the family,” Casey said. “A lot of great things happened because of the trip.”