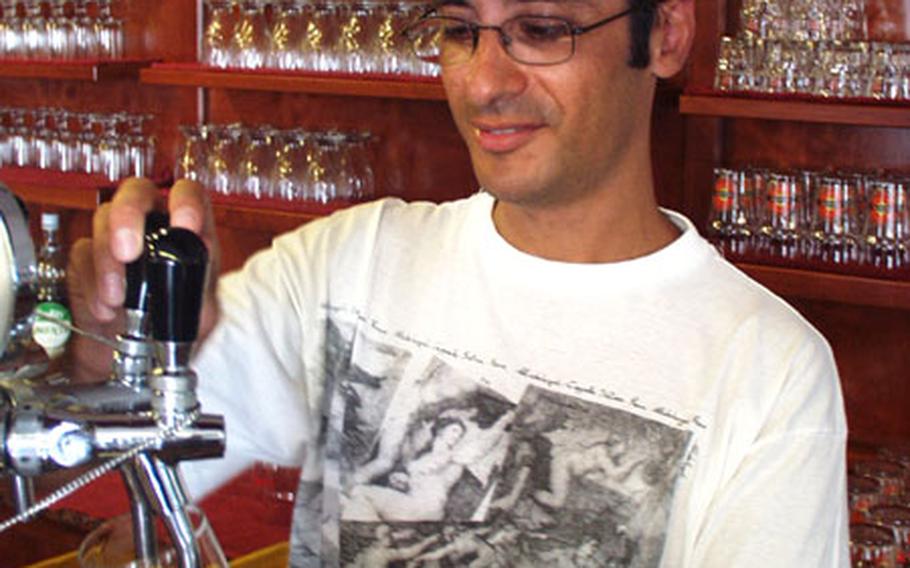 Antonio Avitabile might say the glass is half empty instead of half full at his family&#39;s restaurant in Vicenza, Italy. Americans make up a majority of Il Fauno&#39;s clientele and the deployment of more than 1,000 troops to Iraq hasn&#39;t helped business. (Kent Harris / S&S)

But since more than half of the active-duty military population of Caserma Ederle has been deployed to Iraq, business owners and agency heads have probably learned a little more about their customer base.

&#8220;Our business has changed considerably,&#8221; said Paula Gunderson, general manager for the Army and Air Force Exchange Service in Italy.

Take away more than 1,000 troops from a base that&#8217;s fairly small to begin with, and it&#8217;s not hard to forecast that there will be an impact on merchants both on and off base. But sometimes that impact might be a bit surprising.

For example, sales at the base&#8217;s commissary have been higher in most months than they were a year earlier.

Jerry Templado, store director for the Defense Commissary Agency&#8217;s operation in Vicenza, said part of that has to do with spouses buying care-package items for loved ones in Iraq.

Items such as prepackaged foods, lotions, batteries and flashlights have sold well.

Another contributing factor is that many families are apparently choosing to stay at home and eat, rather than visit restaurants. Gunderson said sales at the food court, while still healthy, are down 30 percent.

Off base, Italian restaurant owners have noticed a difference, too.

Avitabile estimates that, normally, 70 percent of his customers are American. Restrictions against wearing battle dress uniforms outside base following the Sept. 11, 2001, terror attacks had meant smaller crowds at lunch.

But that was until the 173rd Airborne Brigade jumped into Iraq in late March. Since then, business has been down. Fewer people are working at the restaurant, because less business means less need for employees.

At the Hong Kong Chinese Restaurant down the street, things are different. It&#8217;s all family operated, so everyone&#8217;s still working. But family member Di Li said she&#8217;d like to see more Americans eating in her restaurant.

&#8220;[The Club V is] probably the only one where we&#8217;ve seen a drop,&#8221; said Renee Citron of the many activities and businesses she supervises as director of Community Activities.

Citron said agencies around base knew the deployment was coming, so they all had plans in place. Several changed the fare they were offering: More trips for kids and families are available; more aerobics classes are held. Sometimes it&#8217;s just more in general, Citron said, adding that overtime has increased for many of her staffers. But the customers are apparently enjoying the extra attention.

Instead of cutting back, Citron said she&#8217;s looking to hire more employees in certain areas, especially child-care help, which has seen shortages all summer.

Usually, when a store&#8217;s business is down, it looks at laying off employees as a way to save money. But AAFES, despite lower sales in many areas, hasn&#8217;t had to let any employees go, Gunderson said. Instead, as people have left, they haven&#8217;t been replaced.

Meanwhile, some work schedules have had to be adjusted because peak shopping days have changed. Before, Saturdays and Sundays were the busiest days. Now those days are less busy and more sales are generated on Thursdays and Fridays.

Who&#8217;s doing the shopping has had an effect on sales, too: Women&#8217;s clothing and appliances are selling briskly. The store has offered more space and selection for those items.

Also, sales in the PowerZone are down, along with sales at the shoppette, especially in food sales where young single soldiers traditionally load up for the weekend.

And while magazine sales are down, DVD rentals are up. Alcohol consumption is mixed: Fewer people are buying beer and more are buying wine.

If that&#8217;s a mixed-bag of good and bad news, here&#8217;s more good news to throw into it: Because so many troops are gone, getting to places on base is generally easier. And parking, often a challenge when everyone&#8217;s back on base, is more manageable.

Officials say now the challenge is continuing to serve the altered population while planning on the return of the troops in seven or eight months. An early return might cause a few logistical problems. But not many people &#8212; on base or off &#8212; would complain about that.