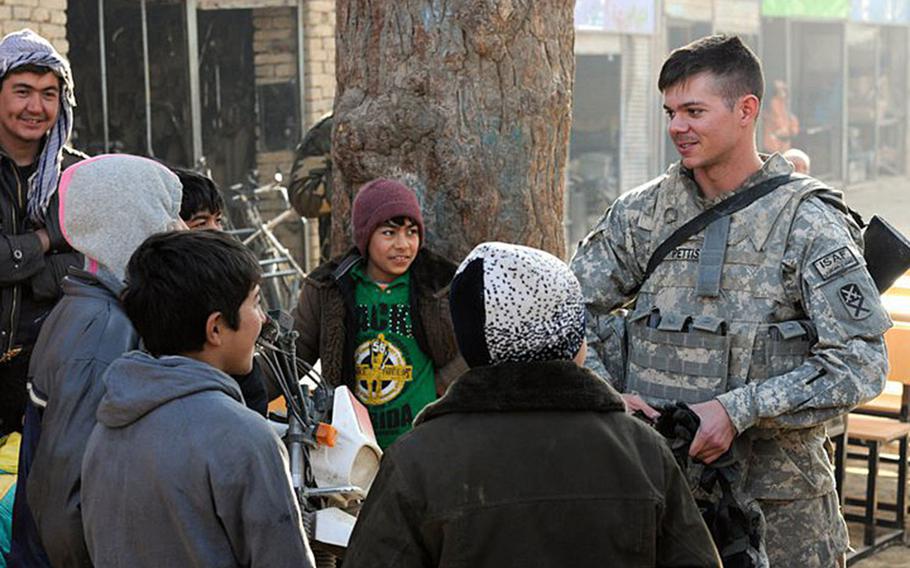 Pierce Pettis interacts with children from the city of Mazar-e-Sharif in northern Afghanistan during a deployment there in 2010. Now a singer-songwriter, Pettis drew inspiration from his time overseas for his music. (Pierce Pettis)

An American folk/country song about two young lovers on the run is a tale as old as time. But this one’s got a twist: it’s set in Afghanistan.

“Lailly and Abdullah” is about Afghan youth in conflict with tradition and features a musician from Alabama singing “Allahu Akbar.”

The unique melding of Americana and Afghanistan comes from Maj. Pierce Pettis, a National guardsman who wrote the song after being inspired by one of his deployments overseas.

Pettis said he hopes his song gets people to think about the lives of the people of Afghanistan, which he said remains mostly unknown to Americans even after 20 years of U.S. troops deploying there.

“Humans care about each other once we know each other,” Pettis said in a recent phone interview about the song, recently featured on Grammy Award winner Margo Price’s livestream. It has drawn hundreds of views on YouTube.

Pettis -- who uses his middle name, Rayvon, while performing -- deployed to northern Afghanistan in 2010 with the now disbanded 900th Maintenance Company out of Alabama.

He returned from deployment and begin a music career, interrupted briefly by another deployment in 2013.

“That place left an indelible mark on all of us,” said Harmon, now a major with the 1200th Combat Sustainment Support Battalion.

As a young logistics officer, Pettis tried his hand at civil affairs missions such as building schools and tried to leave base as much as possible to speak with the people of Balkh province.

“He was always trying to learn about Afghan culture from the locals,” said Dave Abdullah Ali, an Afghan-American who served as an interpreter alongside Pettis.

The song comes from his experiences while deployed, but it’s not about a soldier.

The main characters are two young Afghan lovers who connect over losing their parents during the country’s decades of war.

Pettis said the song was inspired by an intel brief he heard about two young people unable to marry because they were from different tribes. They were then were killed by their families when they tried to elope, he recalled.

The main characters of Pettis’ song are similarly from different backgrounds. Abdullah is shot by a religious cleric and Lailly is despondent at his hospital bed when a doctor tells her she must be realistic about life.

But Pettis adds another twist: a happy ending. While his original version ended sadly, Pettis said he reworked it after remembering conversations with Afghan friends about how too many stories about Afghanistan end badly.

So Abdullah survives and the young couple escape to start a happy life.

“In the same way things can turn awful, they can turn unexpectedly wonderful,” Pettis said.