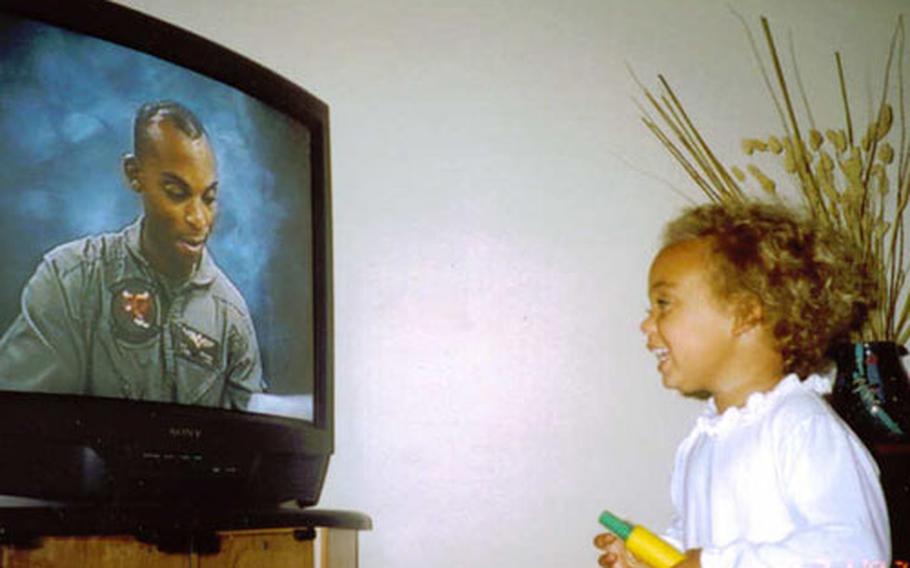 The daughter of a deployed Marine is obviously delighted as she watches her dad on videotape. Available on 65 ships, the “Uniting Through Reading” program has videotaped images of deployed parents reading to their children back home since the 1991 Persian Gulf War. The tapes and matching storybooks are mailed home so children can follow along. ()

At 16 years old, Chief Petty Officer Mark Stark&#8217;s daughter was a little old to be read to.

But he made an exception.

While not able to be there in person, the 37-year-old father of two found a way to make it special, anyway.

Through &#8220;Uniting Through Reading,&#8221; set up by a nonprofit literacy program now in its 14th year, Stark sent Ashlie a special birthday message and gift.

During a port call at Subic Bay in the Philippines, he bought his daughter a ring with a Greek symbol of eternal life.

Betty Mohlenbrock, founder of the Family Literacy Foundation, developed the program during the Persian Gulf War in 1991. Through donations big and small, she has kept it up, running and growing. It&#8217;s available on 65 ships, including several deployed for current operations.

Deployed parents are videotaped reading aloud to their children. The tapes and matching storybooks are mailed back home, and the children watch their parents as they read along, explained Mohlenbrock, a former reading teacher and specialist.

For now, the program is available only on Navy vessels and to a handful of sailors and Marines in remote areas, including the Middle East, she said. The foundation plans to expand the program within a few years to include deployed Army and Air Force personnel.

Aboard the ships, the Navy provides the video equipment and sailors to do the taping.

&#8220;The visual is so powerful, and the storyline is something children always are engaged in,&#8221; she said.

Aboard the Truman, Chief Nancy McNeil, 40, not only serves as the Uniting Through Reading program coordinator &#8212; she&#8217;s also a customer.

Before setting sail, she brought with her several children&#8217;s books and sends home 30-minute and 45-minute tapes of her reading the stories to her two boys, 6-year-old Cullen and 3-year-old Devlin.

The public library system in Norfolk, Va., loaned 60 children&#8217;s books to the Truman for this deployment, which began Dec. 5.

Over the last few years, crews have left behind more than 100 books to create the &#8220;unintentional&#8221; yet thriving Truman library, McNeil said.

The carrier Carl D. Vinson has collected more than 700 books in its library, Mohlenbrock said.

During its November 2000 deployment, the crew held 300 tapings of sailors reading to their children or sending home video messages, McNeil said.

Hushed spots are hard to come by aboard a busy aircraft carrier, but the memorial room honoring the vessel&#8217;s namesake provides the perfect venue of peace and quiet.

And that&#8217;s where Stark goes to read the collection of Sherlock Holmes short stories to his 9-year-old son, Seth, and where he prepared his daughter&#8217;s sweet-16 gift.

Ashlie wrote her father back to say she cried during the entire presentation.

More information on &#8220;Uniting Through Reading&#8221; and the Family Literacy Foundation is at: www.read2kids.org