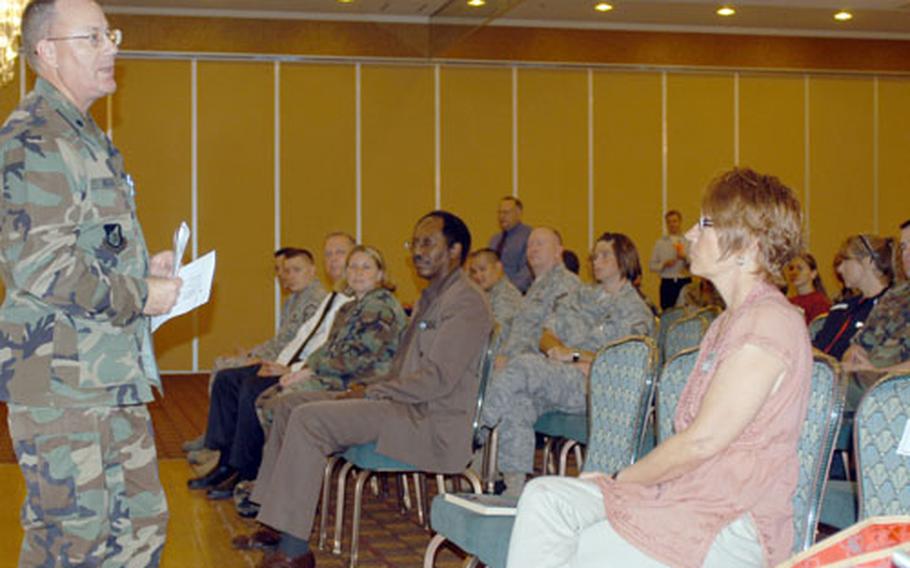 Lt. Col. Steven Nicolai, 35th Fighter Wing chaplain, talks about services available through the chapel during a town hall meeting Tuesday morning at Misawa Air Base, Japan. The event was geared toward military members preparing to deploy later this month and their spouses. (Jennifer H. Svan/S&S)

MISAWA AIR BASE, Japan &#8212; Speaking from his own family&#8217;s experience during deployments, Col. David Stilwell said often the best pillars of support are neighbors or members of the spouse&#8217;s unit.

Take advantage of that help and "you&#8217;ll come through this with flying colors," the 35th Fighter Wing&#8217;s new commander said during a town hall meeting Tuesday morning.

As Misawa prepares to deploy more than 300 airmen later this month in support of the 14th Fighter Squadron, base leaders were to hold two town hall meetings Tuesday to present information and answer questions from military members and their spouses about the deployment and resources available to families.

Because this is Misawa&#8217;s third major Air and Space Expeditionary Force deployment in less than two years, most of the people attending Tuesday morning&#8217;s session indicated this wasn&#8217;t their first separation due to a deployment.

Still, base leaders were handed a number of questions, some submitted in advance, on a range of topics. Here&#8217;s a rundown of what was asked:

Can the active-duty member come home if there&#8217;s a death in the family?

Chief Master Sgt. Ricky Price, 35th Fighter Wing command chief master sergeant: Typically yes, if it&#8217;s the immediate family member of the active-duty member or spouse. It also depends on the mission downrange. Emergency leave may also be granted to attend the funeral of other relatives, depending on the relationship between the deceased and active-duty member/spouse.

How can I get an official passport for my baby if my husband is deployed?

Military Personnel Flight officials: Arrange for a power of attorney before the spouse deploys. Apply for a passport through the passport office (DSN 226-3962).

Can we get additional morale calls?

Can deployed members access the flower shop on base?

Anna Iosefo, Army and Air Force Exchange Service, Misawa exchange, general manager: Yes. The deployed member can call the base flower shop to have flowers delivered on base. Flowers can also be ordered via wire service through AAFES customer service worldwide.

School officials: Sollars has a program; if we don&#8217;t have one at Cummings, we will.

How are our troops doing in the area of operation (the 14th Fighter Squadron is deploying to an unnamed base in Iraq)?

Stilwell: The amount of violence in the [area of operation] has dropped precipitously. It&#8217;s a less dangerous place than it was at this time last year. The heat and humidity are starting to drop off. This is a very good time to arrive there. The food is great. The programs there are awesome, too.

I heard we can webcam with our spouses. How can we do this?

Are Services&#8217; We Care Passports &#8212; coupon booklets for free and discounted meals, services and recreational activities on base for family members of deployed spouses &#8212; available today?

Terra Erb, 35th Force Support Squadron marketing: Monthly passports are available through unit first sergeant or readiness assistance volunteer to family members with a spouse deploying for 30 days or more, and at least seven days within that particular month.

Lt. Col. Steven Nicolai, 35th Fighter Wing chaplain, talks about services available through the chapel during a town hall meeting Tuesday morning at Misawa Air Base, Japan. The event was geared toward military members preparing to deploy later this month and their spouses.