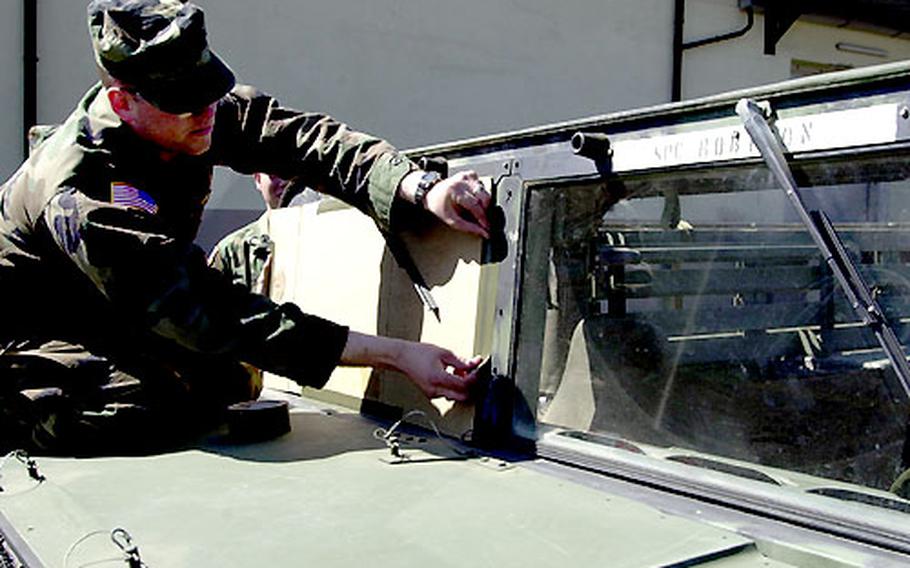 The devil is in the details when it comes to deploying a heavy armored division. Dexter Mann, with Baumholder&#39;s Logistics Directorate, uses a grinder to demonstrate how logistics employees cut the nails out of wheel chocks to reuse them for shipments. (Terry Boyd / S&S)

BAUMHOLDER, Germany &#8212; The big challenges when deploying a heavy outfit like the 1st Armored Division are in the tiny details.

Like how to keep the windows in military vehicles from breaking as they are being shipped by train.

Or what to do with the 10-pound wood wheel chocks that keep the vehicles tight in their chains on the freight cars.

On Monday and Tuesday, the Baumholder-based units of the 1st AD were in the midst of leaving for Iraq as the division replaces the 3rd Infantry Division.

Deploying the various pieces of an armored division is one of the largest logistical tasks in the world, says Eiko Holzinger, head of the Directorate of Logistics servicing Baumholder&#8217;s 222nd Base Support Battalion.

In Baumholder, they focus on the pebbles that make up the mountains.

Take, for instance, how Holzinger and company scavenged enough cardboard to cover more than 3,000 windows on 1,500 military vehicles, such as trucks and Humvees.

Back during Desert Storm, Holzinger saw military vehicles arriving at the port with smashed windows. Covering them with cardboard may seem like an obvious solution. But where do you get enough without buying it?

About two months ago, he and his crew got the idea of rounding up cardboard from organizations that were throwing it away, says Jeffery Morrison, directorate deployment specialist.

It was collected from Baumholder&#8217;s Central Issue Facility, Troop Issue Subsistence Activity, &#8220;AAFES, the commissary. From a little bit of everybody,&#8221; says Morrison, a former maintenance motor sergeant who retired in Baumholder in 1996.

It was. And now, a walk through Baumholder&#8217;s railhead reveals soldiers crawling on truck and Humvee hoods, cardboard in one hand, masking tape in another, he added.

A walk through the logistics storage shed reveals piles of wheel chocks next to those bales of cardboard.

Each chock has been labeled and has two pre-drilled holes so soldiers loading vehicles onto trains on moving day will see precisely where to put the 8-inch long nails that hold the chock to the railcar bed.

Logistics staffers decided they could benefit from the $3 chocks other units were throwing away after one use. They organized a detachment to grind off the nails so the chocks could be reused.

If only everything were so easy, Holzinger and Morrison said. Moving 5,000 troops and all their stuff is intertwined with residual issues. Like storing 883 soldiers&#8217; cars while they&#8217;re deployed, Morrison says. Add to that the household goods of 2,500 single soldiers.