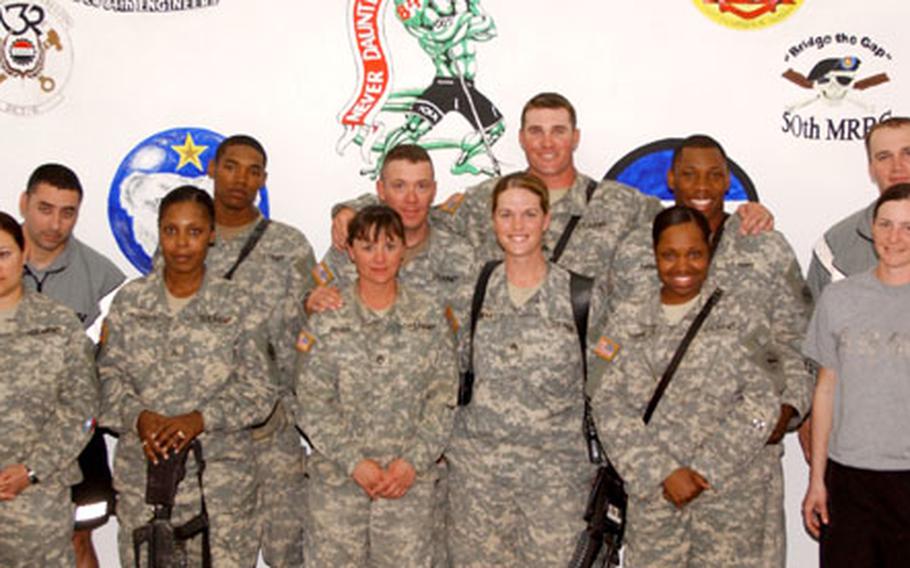 These married couples in the 84th Engineering Combat Battalion said being able to live together while serving in Iraq has been a godsend, but deployments still entail heartache. (Jeff Schogol / S&S)

CAMP ANACONDA, Iraq &#8212; When Sgt. 1st Class Miguel Guajardo, 34, learned that his wife would be deploying to Iraq, he volunteered to go with her.

Miguel Guajardo, of the 84th Engineer Combat Battalion, said he was slated to go to Iraq with a different unit at a different time, meaning the two would be separated.

&#8220;I realized in order for us to stay together, we would have to come to Iraq together,&#8221; said the Corpus Christi, Texas, native.

Afterward, he learned that he would not only be able to serve with his wife, but live with her as well.

Lt. Col. Mark Toy, battalion commander, said he allows married couples such as Miguel and Delilah Guajardo to live together because he recognizes that his soldiers are professionals and know how to act.

For Miguel Guajardo, being able to live with his wife while serving in Iraq has been &#8220;more than I hoped for.&#8221;

Still, some couples say being with their spouses can&#8217;t make everything all right.

Some couples said they worry when their spouses go outside the wire. They said they try not to think about their loved ones being in danger and they pass the time by watching movies.

Thornton, of Newark, N.J., said this deployment marks her second with her husband, Sgt. Hoover Thornton, 23, of Jersey City, N.J.

She said serving with her spouse gives her a shoulder to cry on, but leaving her child back in the States without his parents is a hardship.

Miguel Guajardo said he and his wife are experiencing their 14-month-old son&#8217;s early childhood &#8220;vicariously&#8221; through DVDs and other items sent by their family.

Sgt. 1st Class Delilah Guajardo, 34, gets emotional when she still sees her son as the 10-month-old boy she left when she came to Iraq.

Joyner, of Jackson, Calif., said being able to serve with her husband has been a &#8220;blessing,&#8221; but being away from her son has proven more difficult than she anticipated. She said she calls home as often as possible and tries to get through the pain of separation.

Delilah Guajardo, of Corpus Christi, Texas, said she views having her family raise her son while she is gone as a gift to them.