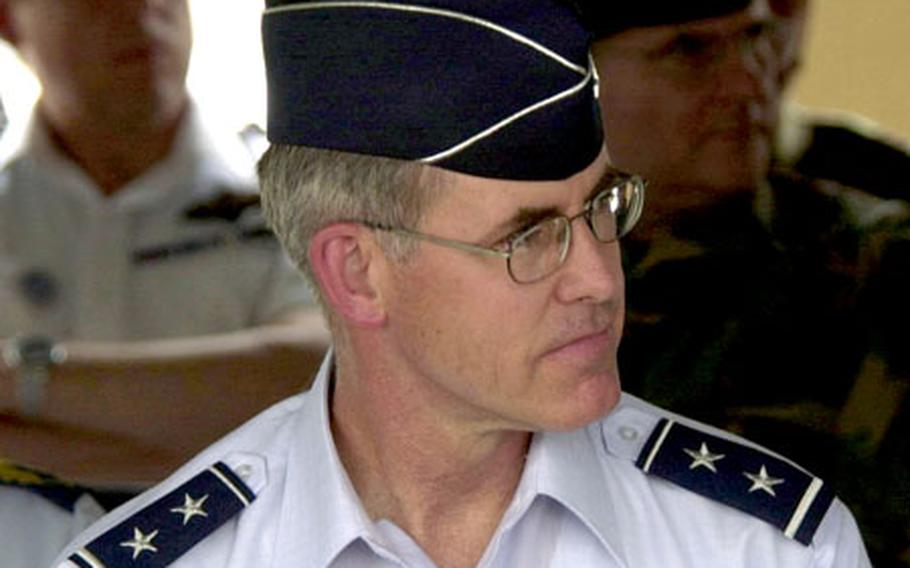 YONGSAN GARRISON, South Korea &#8212; Tom Kane arrived for his second tour of duty in South Korea in summer 2003, during the height of remembrances marking the 50th anniversary of the Korean War&#8217;s armistice.

He attended ceremonies with dignitaries such as Henry Kissinger and heard veterans speak of battles and political maneuvering during the three years of fighting. The world was paying its respects to history on this Asian peninsula and learning more about the evolving relationship between North and South Korea.

It was, he said recently, the right introduction for him.

Then an Air Force brigadier general coming from the North Atlantic Treaty Organization in Germany, he was starting his current job as deputy chief of staff for U.S. Forces Korea and the United Nations Command.

&#8220;It&#8217;s a different relationship,&#8221; said Kane, now a major general, comparing the 25-member NATO with the joint U.S. military and combined international force here. &#8220;I think this one is more melded in the modern era and the blood that we shed together here. A lot of Europeans have not forgotten that, but it&#8217;s a more distant memory than it is here in Korea.&#8221;

In June, Kane will leave South Korea for Scott Air Force Base in Illinois to serve as Air Mobility Command&#8217;s deputy chief of staff for plans and policy.

For the past two years he&#8217;s served as deputy chief for U.S. Forces Korea and as USFK commander Gen. Leon J. LaPorte&#8217;s representative for the U.N. Command and its Military Armistice Commission.

The dual role of military general and international liaison has afforded Kane the opportunity to help the two Koreas with business opportunities, to deliver aid shipments into the communist country and to bring home remains of servicemembers left in North Korea since the 1953 armistice, he said.

Repatriation ceremonies, like those held on Yongsan, help remind the world that the war is not over, Kane said.

&#8220;This just continues to emphasize the fact that the world really has a great interest in the outcome of the Korean War,&#8221; he said, adding that the ultimate goal is to see North Korea&#8217;s army and leader join the effort and end the standoff.

&#8220;And we&#8217;re only going to take one more partner, the Korean People&#8217;s Army, and Kim Jong Il will have to make a decision that they understand the world has really got their hand out there ready to help if they are willing to do a few things that are not unreasonable. Like feed their people.&#8221;

Part of Kane&#8217;s work for USFK is, in a way, about helping North Koreans feed themselves.

He helped oversee construction and the politics involved in building two roads that now connect the countries. Trucks and buses carry people, equipment and goods to and from Kaesong, North Korea, where local workers make South Korean goods.

America&#8217;s high-profile involvement with the U.N. Command makes an easy target for Pyongyang, which routinely calls U.S. policy hostile toward the communist country, Kane said. It is an accusation U.S. leaders continually deny.

Kane said international involvement is growing, not waning. Fifteen countries are now pledged to help South Korea should the North show any aggression, and two more countries are close to joining that effort, he said.

Kane said working with those countries is one of the aspects about his life here that he and his wife, Renee, will miss most.

Understanding and appreciating relationships among South Koreans, however, will prove the most important challenge for the next deputy of USFK and the U.N. Command, Kane said.