Departing Submarine Group 7 leader looks forward to his next challenge 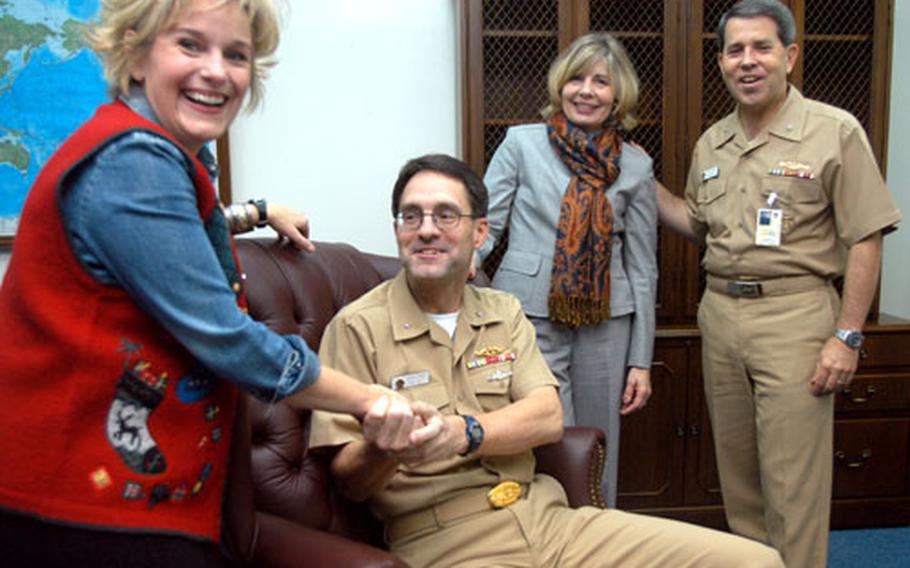 YOKOSUKA NAVAL BASE, Japan &#8212; Here&#8217;s a little-known fact: Pacific Fleet headquarters in Hawaii is closer to Washington, D.C., than it is to Hong Kong, Rear Adm. John Bird says.

So while he&#8217;s looking forward to the challenge of being Pacific Fleet&#8217;s new deputy chief of staff, the move puts him far from Yokosuka Naval Base, where he spent the past 15 months as commander of Submarine Group 7.

Bird was to be relieved by Rear Adm. Douglas McAneny in a Wednesday change-of-command ceremony at Yokosuka.

Bird&#8217;s time in Yokosuka has been busy. Dual-hatted as commander of command task forces 74 and 54, Bird oversaw Submarine Group 7, which directs submarine activities over almost half of the earth&#8217;s surface area, from the Western Pacific to the Indian Ocean, according to the command&#8217;s Web site.

Included in CTF 54 and CTF 74 are submarines deployed to 5th and 7th fleets, the Guam-based Submarine Squadron 15, the USS Frank Cable submarine tender and the two Guam-based attack submarines.

&#8220;ASW is very important to the U.S. Navy and its allies,&#8221; Bird said. This fall&#8217;s news that a Chinese submarine surfaced within torpedo distance of the USS Kitty Hawk was portrayed in the media as a bigger deal than it was, Bird said. He added that while the Chinese are not enemies, he is often &#8220;perplexed at how many submarines the Chinese are building and buying.&#8221;

While heading the submarine group, Bird also worked to engage and coordinate with regional partners, he said.

&#8220;We work very closely with the Japan Maritime Self-Defense Force,&#8221; Bird said. &#8220;We&#8217;ve also been working with submarine forces in the Republic of Korea, Australia and Singapore and are talking with Malaysia as they start building a submarine force of its own.&#8221;

McAneny, Bird&#8217;s relief, has been in Yokosuka preparing for the transition. His last command was in Washington, D.C., on the Joint Staff as the deputy director for politico-military affairs for Europe, NATO, Russia and Africa.