Departing Sanchez says he 'never failed my soldiers, my Army or my country' 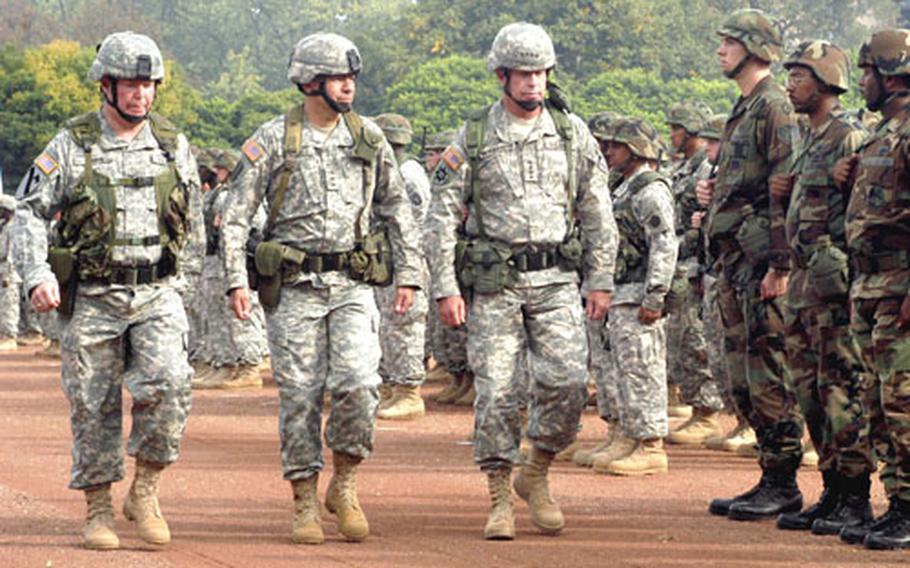 HEIDELBERG, Germany &#8212; Lt. Gen. Ricardo S. Sanchez, whose name and military career likely will forever be tied to the American abuse of prisoners at Abu Ghraib, relinquished command of the U.S. Army&#8217;s V Corps on Wednesday in a ceremony at Campbell Barracks.

Even though Sanchez served as corps commander for more than three years &#8212; longer than any previous general &#8212; the Army has yet to name his successor. The Army announced Friday that the 33-year veteran will retire in November.

After the ceremony, Sanchez speculated about who would command the corps with him gone. Hours later, his conjecture was confirmed by Hilde Patton, a V Corps spokeswoman: Maj. Gen. Fred D. Robinson Jr., 1st Armored Division commander, was named interim commander of the corps effective Wednesday.

Over the past two years, Sanchez, 55, has come under criticism for his leadership in Iraq, under which the abuse of prisoners at Abu Ghraib occurred. Sanchez has said nothing to either deflect that criticism or suggest he deserves it. Sanchez obliquely addressed the scandal Wednesday when he talked about its effect on his family.

&#8220;My family did go through some tremendously tough times in the last three years,&#8221; he said after the ceremony.

Earlier, in his speech, he said his family deserved better than the way it had been treated. He suggested that speculation by the media also had something to do with his family&#8217;s distress.

In remarks after the ceremony, Sanchez repeatedly refused to respond directly to questions about his career and the role military and political leaders may have played in his leaving the service. Asked three times whether leaving the Army was his choice or forced on him from above, he responded each time: &#8220;I&#8217;m retiring Nov. 1.&#8221;

When asked if he felt he had been treated fairly by the Army, the civilian leadership in the Pentagon and in the government, Sanchez said that wasn&#8217;t something for him to judge.

He said he continued to &#8220;take the high road&#8221; in not discussing his career in respect to Iraq war policy.

Various military investigations cleared Sanchez of wrongdoing, but one report found him and other top commanders &#8220;responsible but not culpable.&#8221;

In regard to whether his leadership role in Iraq played any part in the Pentagon&#8217;s reticence to promote him further, Sanchez said he didn&#8217;t know why his superiors made the decisions they made and had never explained their reasoning to him. A promotion to general would have required Senate confirmation and likely would ave stirred a political fight.

He chuckled when asked if he would ever tell his side of the story.