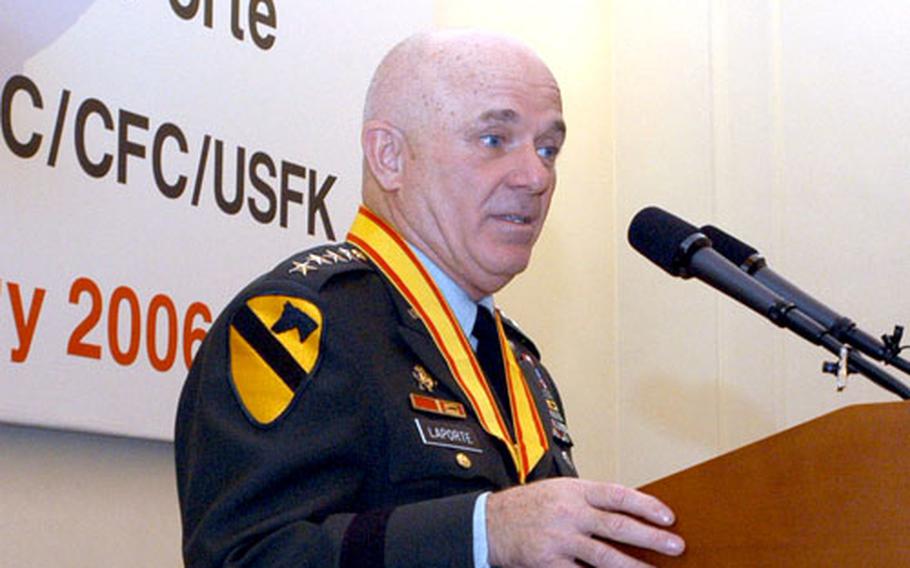 SEOUL &#8212; U.S. Forces Korea commander Gen. Leon J. LaPorte was given honorary citizenship to South Korea&#8217;s capital city Thursday in a ceremony to honor the four-star general before he leaves as America&#8217;s longest-serving military leader here since the Korean War.

During his remarks, LaPorte jokingly asked whether he would have to pay taxes as a Seoul citizen. The crowd of U.S. military leaders and city hall officials quietly laughed.

LaPorte and his wife, Judy, have lived on Yongsan Garrison in Seoul for almost four years. LaPorte is leaving South Korea on Feb. 3 and plans to retire from the military after almost 38 years with the Army. He and his wife plan to move to Texas.

During his remarks Thursday afternoon, LaPorte complimented Seoul on its festivals, its holiday displays and its recent renovation of the Cheonggye stream through the city&#8217;s downtown. He also praised South Korea for becoming an economic leader in Asia and the world.

After the ceremony, he talked with his guests about what he&#8217;d like to still do in South Korea, namely run along the Han River. &#8220;Maybe for P.T.,&#8221; he laughed, talking about his physical training.

LaPorte was the 534th person to receive honorary citizenship to Seoul since 1958, according to Cho Kyung-ik, a Seoul city official.

The general won&#8217;t have to pay taxes but will be invited as a VIP guest to city ceremonies, get free admission to museums and other cultural events and ride the city&#8217;s subway for free when he turns 65.

Hwang Hae-rym contributed to this article.