Departing general was a tech-savvy leader 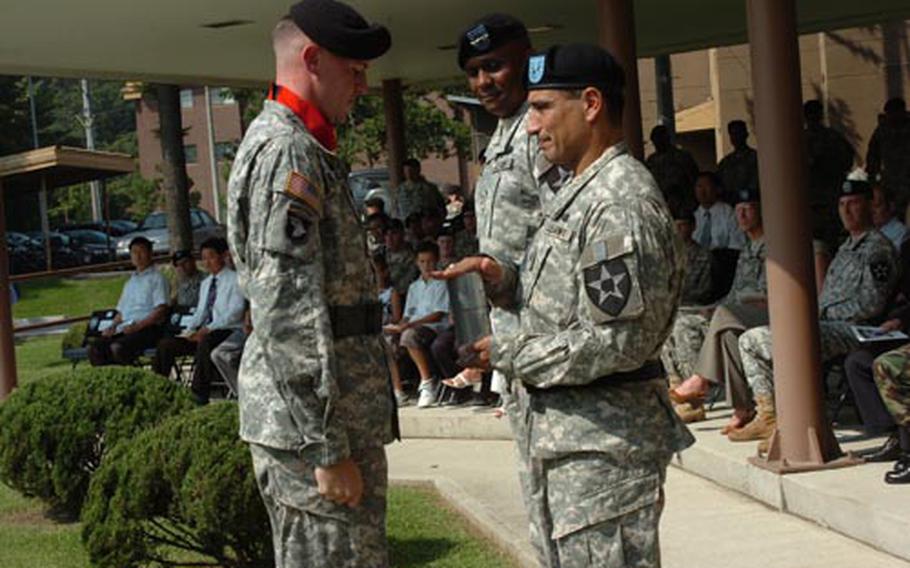 CAMP RED CLOUD, South Korea &#8212; A year ago, it became Brig. Gen. Joe Ramirez&#8217;s job to coordinate maneuvers for a division that probably has less physical space to work with than any other in the active-duty Army.

To overcome that, Ramirez, the outgoing assistant commander for maneuvers for the 2nd Infantry Division, focused on the ongoing technological efforts to spur what he and commander Maj. Gen. John Morgan say is becoming an Armywide model for command-post war simulations.

"The commander doesn&#8217;t know if [a soldier] is in a simulator or on the next ridge line," Ramirez said Friday. "This is the best use of live, virtual constructs we&#8217;ve seen in the Army."

Although 2nd ID has been developing this technology for years, Morgan credited Ramirez for his exercise leadership and skills he brought from past roles in training commands.

"His expertise and knowledge of current doctrine have ensured the division&#8217;s readiness," Morgan said during Ramirez&#8217;s farewell ceremony.

Ramirez&#8217;s successor has not been named.

Ramirez is headed to the J-5 joint plans section at U.S. Army Europe in Stuttgart, Germany. He last served in Germany in 1990, shortly after the Berlin Wall fell.

He said he looks forward to seeing the changes in the European theater since then and knows the focus is quite different from South Korea&#8217;s situation. Commanders in 2nd ID have steadily increased exercises centered on today&#8217;s war zones. However, they still practice the kind of high-intensity warfare training that will be important to the Army&#8217;s future, Ramirez said.

"Right now there are 10 divisions in the Army and nine of them are concentrating on counterinsurgency, as they need to be," Ramirez said. "At some point Operation Iraqi Freedom and Operation Enduring Freedom will end and the Army will come back to [conventional warfare] training."

As long as the counterinsurgency wars remain, commanders throughout U.S. Forces Korea have acknowledged that Iraq and Afghanistan get priority for funding and equipment.

However, Ramirez says he hasn&#8217;t heard any commanders say their units didn&#8217;t have what they needed to accomplish their missions. "This division does a great job with the resources that we have," he said.