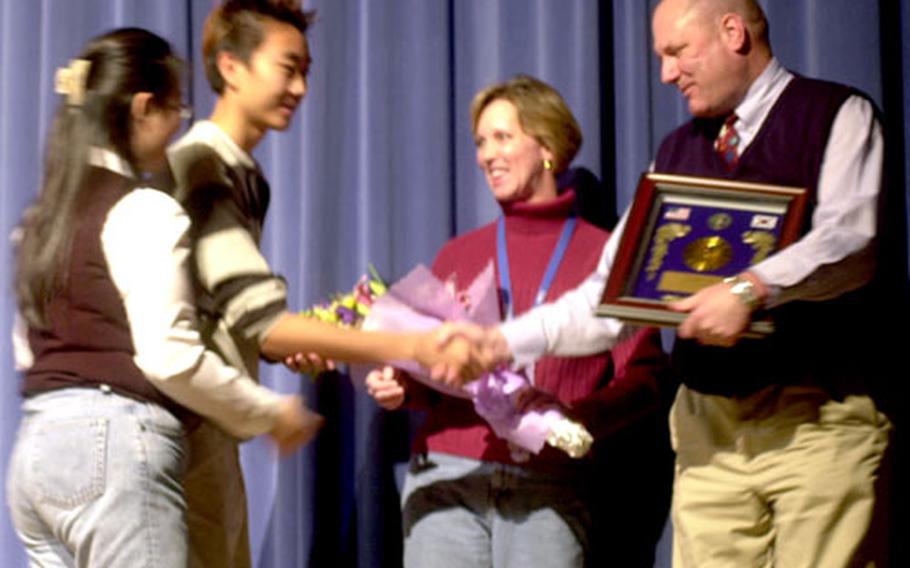 YONGSAN GARRISON, South Korea &#8212; The top Department of Defense Dependents Schools official in South Korea was praised Monday at a Seoul American High School honors assembly for being an active administrator who was no stranger to touring classrooms.

Bruce Jeter will leave Korea on Dec. 20 to become the supervisor for Domestic Dependent Elementary and Secondary Schools in Puerto Rico and Cuba, while based in Peachtree City, Ga. His replacement has not yet been named.

In his two years overseeing schools in South Korea, the district has made strides in recruiting teachers, Jeter said.

The nuclear situation with North Korea has caused concerns for teachers considering coming to South Korea, Jeter said, but the rich diversity of students on American bases in South Korea &#8212; the majority are American-Asian &#8212; can result in a great tour.

His office starts hunting for teachers in February for the academic year that starts the following fall, sorting through applicants and working to find the best matches, he said. Staying atop the hiring process has meant no shortage of teachers despite recruiting challenges.

A disappointment during his two-year tenure was the withdrawal of $32 million in funds to build a new middle school here, he said, adding that questions over whether the garrison will relocate prompted the funding withdrawal.

The 570 students now attend classes in rehabilitated Quonset huts, Jeter said, adding officials have yet to decide if and where a new school will be built.

During the assembly, he advised students to keep setting goals.

Because 450 of 630 at the high school achieved a 3.0 or higher first-quarter grade-point average, the students were treated to a one-hour assembly featuring performers.

&#8220;I want to challenge you to set the standard, as every act you take represents the best of Seoul American High School,&#8221; Jeter said.