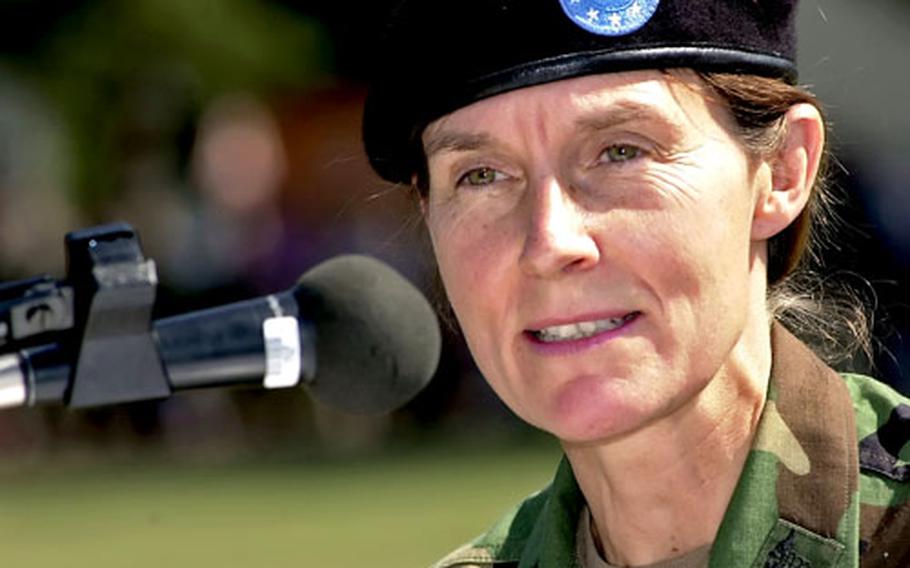 LANDSTUHL, Germany &#8212; Not long after Army Dr. (Col.) Rhonda Cornum took command of Landstuhl Regional Medical Center, she was confronted with a hospital&#8217;s worst fear: every bed full with more patients on the way.

As she stood at the hospital&#8217;s reception area in July 2003, her operations officer broke the news: a flight packed with casualties from Iraq was moments away from landing in Germany and all 500 beds were occupied.

Staff members scrambled to accommodate the patients, but Cornum said she realized then that they had to get better at receiving the wounded or every day would be filled with chaos and confusion.

The hospital and its staff &#8212; with Cornum leading the way &#8212; revamped its procedures, automated its receiving process and put a priority on patients who needed treatment the most. Now, before patients arrive from Iraq or Afghanistan, they already have a bed assigned to them and an admissions packet with their name on it.

Without the changes in place, it&#8217;s doubtful the hospital &#8212; the U.S. military&#8217;s largest outside of the United States &#8212; could have handled the thousands of patients the last two years. As Cornum&#8217;s tour of duty ends, she said she is most proud of how the hospital has become more efficient to handle mass casualties and staff members have been able to adapt to a breakneck pace that has yet to let up.

Dr. (Col.) James Frances will temporarily replace Cornum, the first woman to command Landstuhl, during a ceremony on Thursday. She will head to U.S. Army Forces Command at Fort McPherson, Ga., to be the top surgeon. Frances, who is currently the hospital&#8217;s chief of medicine, will serve as interim commander until the Army chooses a permanent commander.

She leaves behind a hospital that remains the military&#8217;s major hub for wounded troops from the Middle East. Part of making the operation work meant staff members had to realize that the pace would not change, she said.

&#8220;People work harder now than I think they probably ever did, but we still manage to do other things very successfully,&#8221; she said.

Frances, a doctor who has been at the hospital for the last five years, said Cornum swiftly prepared staff members to handle just about anything.

To help make things go smoothly, Cornum has occasionally pitched in to help perform surgeries and sometimes she greets patients as they come through the main entrance. She even operated on a military working dog with a near-fatal tumor.

Many people probably remember her most as a prisoner of war during the Persian Gulf War. In 1991, her Black Hawk helicopter was shot down and five of the eight people on board were killed. Three survivors, including Cornum, were captured. She was later released and wrote a book about it.

Although her capture is what has indelibly marked her 27-year career so far, she said she hopes to be remembered as someone who &#8220;took good care of patients and took good care of the people that work here.&#8221;