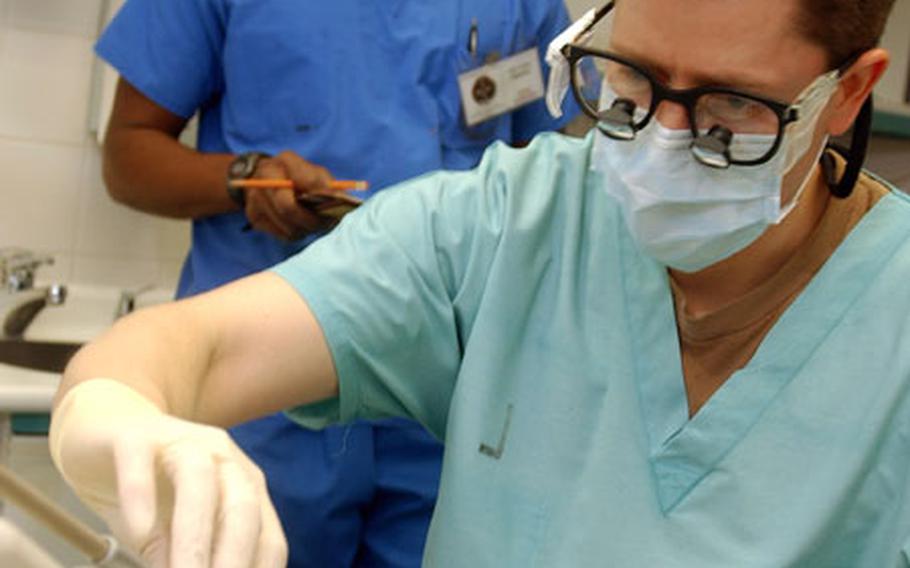 Air Force dentist Dr. (Lt. Col.) William Parker is combating the shortage of military dentists one tooth at a time.

The 59-year-old dentist entered the Air Force almost two years ago, following the events of Sept. 11, 2001.

Well beyond the Air Force officer cutoff age of 35, it took several months for the Air Force to agree to allow Parker in the service.

&#8220;We are in a trend of increasing shortages,&#8221; said Rear Adm. Dennis Woofter, chief of the Navy Dental Corps and deputy chief of the bureau for medicine and surgery for dental operations. &#8220;Although we&#8217;re trying to turn that around, I would guess for the next several years, we&#8217;re probably going to be in this situation or a bit worse.

The Air Force agrees that the overall trend is discouraging.

The Air Force has manning slots for 1,084 active-duty dentists. They are short 91. The Air Force Reserve Component, which also includes the Air National Guard, reported that in July, 335 dentists were assigned out of 404 authorized; a shortage of 17 percent.

A number of factors have contributed to the decrease.

Another factor is that the number of dentists eligible for retirement grows each year. Parker was one of those statistics. After closing the doors to his private practice after 27 years, he looked to the Air Force as a way to contribute to the armed forces and put off retirement.

In the States, rural areas in particular are bracing to be hit hard by the number of retiring dentists. States such as North Dakota and South Dakota expect to lose 40 percent and 35 percent of their dentists to retirement in the next 10 years.

By 2014, ADA data show that the number of retiring dentists will surpass the number of dental school graduates. Nationwide, there are roughly 152,000 active dentists, more than a third of which are older than 55.

The Army, Navy and Air Force are examining ways to combat the shortage. Incentives include accession bonuses, dental school scholarships, loan repayment programs and specialty training. Accession bonuses are one-time payments to incoming dentists, which for most services commits them to an additional year of service.

The Army and Navy hope to draw in more dental officers. Both Army and Navy scholarships cover the full cost of tuition and include a monthly stipend.

As far as retention, each service is offering re-enlistment bonuses that may include free graduate training in exchange for a longer commitment.

The Air Force also has started a school loan repayment program. Currently, the Army and Navy do not offer loan repayment, but expect to implement one when funds become available.

At the close of the fiscal year on Sept. 30, the Navy reported that it has 1,238 dentists on active duty and 330 dentists in the Reserves. Woofter said that the ideal number of active-duty dentists would be 1,366.

The Army has the biggest shortage, with 973 active-duty dentists out of a target number of 1,138, said Col. John Luciano, assistant chief of staff for strategic initiatives at the Dental Command.

While the Navy and Air Force in Europe have not been affected, the Army is combating its shortage by hiring civilian dentists as contractors.

The Army has 50 civilian dentists working alongside Army dentists at 36 clinics in Germany, Italy and Belgium.

As for Parker, he is scheduled to leave the Air Force after he turns 60, but for now he is happy to serve.