Harry Beeman, left, a World War II vet seeking VA compensation for injuries he suffered during the war, spends much of his time these days taking part in Veterans of Foreign Wars events and attending funeral services of fellow vets in Cape Coral, Fla. (Courtesy of Harry Beeman)

Harry Beeman, left, a World War II vet seeking VA compensation for injuries he suffered during the war, spends much of his time these days taking part in Veterans of Foreign Wars events and attending funeral services of fellow vets in Cape Coral, Fla. (Courtesy of Harry Beeman) Harry Beeman, who served in the Navy during World War II, recently had a request for a Purple Heart rejected in Washington. This is the letter he received from a congressional committee. Beeman was hoping to get recognition for stomach wounds he said he suffered when a Japanese plane blew up near the deck of his ship, the USS Ellet. The deep gash in his stomach was caused by shrapnel from the plane, he said. (Courtesy Harry Beeman) 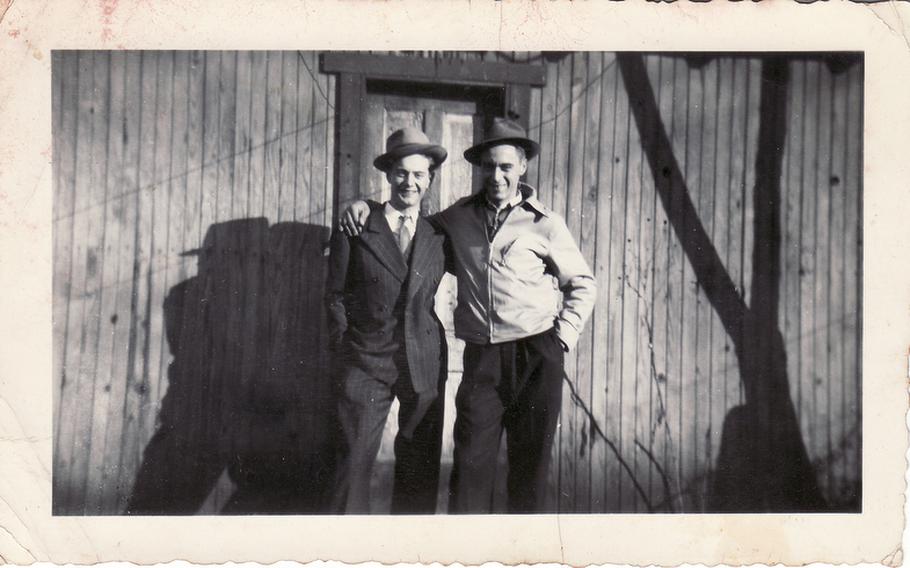 Shortly after the attack on Pearl Harbor, Harry Beeman (left) bids farewell to family as he prepares to head off for basic training at the Navy's Great Lakes training base. His brother John is on the right. (Courtesy Harry Beeman) 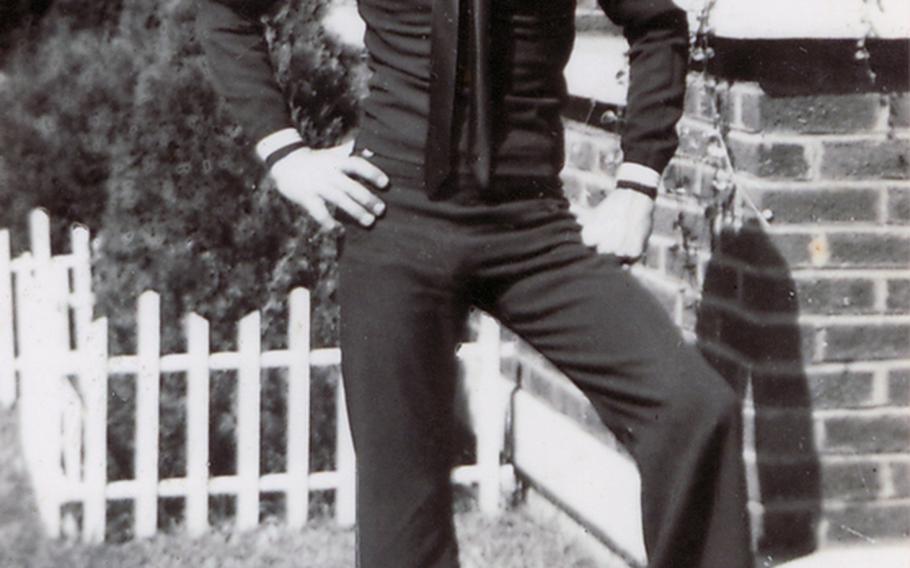 Harry Beeman, pictured soon after his return home from the war, didn't discuss his injuries for years. Now, some 70 years after fighting in the Pacific, he is seeking compensation from the Veterans Administration for injuries he said he suffered. (Courtesy Harry Beeman)

STUTTGART, Germany &mdash; When Harry Beeman began his quest earlier this year for a Purple Heart, the World War II vet had visions of a 90th birthday party where he would be pinned with the medal.

That is not to be.

The former gunner&rsquo;s mate 1st class, who served aboard the USS Ellet in the Pacific from 1941-1945, received word just weeks before his Aug. 23 birthday that crushed any hope of receiving a Purple Heart.

In a letter from the House of Representatives Committee on Veterans&rsquo; Affairs, dated Aug. 2, Beeman was told that records from his ship made no mention of injuries sustained by individual crewmembers.

&ldquo;Unfortunately, an extensive search conducted by my staff was unable to yield any record of your being wounded in a firefight aboard the Ellet,&rdquo; wrote Rep. Bill Johnson, R-Ohio, chairman of the House Subcommittee on Oversight and Investigations.

&ldquo;Reporting requirements for deck logs, war diaries, and action reports changed several times between 1942 and 1943, making it all the more difficult to determine who was wounded in battle,&rdquo; Johnson wrote. &ldquo;The Navy Awards Board may not award a Purple Heart without such records.&rdquo;

Beeman had hoped to receive the Purple Heart in connection with stomach injuries he said he suffered when a Japanese torpedo plane exploded near the deck of his ship. His scars include a deep gash that runs across his stomach.

&ldquo;It&rsquo;s kind of heart-breaking for me,&rdquo; Beeman said in a telephone interview from his home in Florida.

&ldquo;I know in my heart what happened to me, but I would have liked the credit for my children to see before I check out.&rdquo;

Still, Beeman, has not abandoned his quest for closure on events that happened 70 years ago. He also is attempting to get the Veterans Administration to recognize a host of injuries, including brain trauma that he says for decades has caused him to struggle with blackouts and balance issues.

The VA routinely hears from vets like Beeman, who step forward decades after their time in combat with new or additional claims, according to Charles Fettes, a retired Navy master chief petty officer, who has worked on veterans service issues for nearly 20 years.

&ldquo;It happens on almost a daily basis. It&rsquo;s not unusual to have a 90-year-old come through the door,&rdquo; said Fettes, who works as a veterans&rsquo; service officer in Citrus County, Fla., and is the author of the online manual, &ldquo;A Guide to Obtaining Veterans Administration Benefits.&rdquo;

&ldquo;Certain things set people off. Sept. 11 set people off. The amount of claims at that time was incredible. Those kinds of things trigger memories in veterans,&rdquo; he said.

When Osama bin Laden was killed by U.S. special operations forces, there was another spike. The recent media attention on traumatic brain injury, he said, is another trigger: &ldquo;I&rsquo;m seeing a lot of those, from World War II and Korea.&rdquo;

Across the country, Korean War and World War II-era vets continue to enter the VA system for the first time, even as their overall numbers dwindle with each passing year, according to VA data.

Beeman said he is pressing forward in his quest for service-related compensation connected to ailments stemming from battles that the Ellet was involved in, including the historic Battle of Midway.

Though he remained silent about his injuries for years, the Cape Coral, Fla., resident said he wants the recognition and closure that would come with such acknowledgement.

Although he bears physical scars, there is no documentation to prove that they resulted from his WWII battle engagements. It&rsquo;s a matter of his word.

Like many in his generation, Beeman wasn&rsquo;t active about seeking benefits when he got back, said L. Scott Kibler, his attorney. &ldquo;They were busy getting on with their lives. Now it&rsquo;s important to him.&rdquo;

At local veterans service offices in counties around the country, the caseload from wars old and new can be overwhelming.

&ldquo;The influx of claims is such that they can&rsquo;t keep up on a monthly basis,&rdquo; said Fettes, who says he manages between 400 and 500 cases per month, working with vets from World War II to present-day conflicts.

During a recent appearance before the Veterans of Foreign Wars, President Barack Obama said steps are being taken to speed up the process.

&ldquo;We&rsquo;ve hired thousands of claims processors,&rdquo; Obama said. &ldquo;We&rsquo;re investing in paperless systems. To their credit, the dedicated folks at the VA are now completing 1 million claims a year, but there&rsquo;s been a tidal wave of new claims.&rdquo;

Defense Secretary Leon Panetta, during a joint appearance before the House Armed Services and House Veterans Affairs committees on July 25, echoed those challenges.

&ldquo;The system is going to be overwhelmed,&rdquo; said Panetta. &ldquo;Let&rsquo;s not kid ourselves. It&rsquo;s already overwhelmed.&rdquo;

For older vets like Beeman, the backlog means they run the risk of dying before a resolution is reached. As he attempts to push his claims forward, Beeman said he shoulders much of the responsibility for his current situation.

&ldquo;It&rsquo;s my own damn fault,&rdquo; he said. &ldquo;I never told anyone. I was too damn proud to ever say I needed anything.&rdquo;

While Beeman contends he isn&rsquo;t struggling financially &mdash; he draws a $38,000 annual pension from his years on the Indianapolis fire department &mdash; he said his push for benefits is a matter of principle and fairness.

According to Beeman, his injuries range from hearing loss, internal stomach injuries from shrapnel, mangled toes from the large shell casings rolling around the deck, scarring on his arms from carrying hot shell casings and brain trauma that has caused vertigo and balance problems.

During his years as a firefighter, Beeman said, he had to conceal his injuries to stay on the job.

&ldquo;The worst thing I have is from the acoustics of the gunfire. I was in the mouth of a five-inch gun for four years. Now, they&rsquo;re finding out all these guys with problems related to the acoustics from gunfire,&rdquo; Beeman said. &ldquo;And these guys now have ear protection. We didn&rsquo;t have any protection at all.&rdquo;

In 2009, Beeman filed a round of service-related claims. Those claims were denied in 2010 and subsequent appeals were filed.

In January, Beeman hired Kibler to help make his case. Kibler, who practices in Florida, submitted a request for a review, which included a medical opinion from Beeman&rsquo;s doctor, who attributes his vertigo to brain trauma caused by repeated exposure to naval gunfire.

John Stewart, a retired Air Force chief master sergeant, veterans advocate and publisher of vet-related websites, is among those lobbying on Beeman&rsquo;s behalf.

&ldquo;I can say that not only from working with veterans&rsquo; problems, but mine too, the VA compensation system is one screwed-up mess,&rdquo; said Stewart.

For Beeman, the hope is to get his claims approved before he dies, which would allow his 69-year-old wife, Barbara, to receive benefits after his death. If approved, the benefits could range from a couple hundred dollars a month to roughly $2,500, depending on what injuries are recognized, Beeman said.

According to Navy records, Beeman officially entered active service on Dec. 15, 1941, eight days after Pearl Harbor. Shortly after Japan&rsquo;s surrender, he separated on Oct. 22, 1945, as a gunners mate 1st class.

For Beeman, the details of his years of service remain vivid.

He remembers being in the Solomon Islands on Oct. 26, 1942, aboard the Ellet traveling with the Enterprise carrier group, when they came under attack.

&ldquo;Planes were coming at us like a flock of birds,&rdquo; Beeman said. &ldquo;We were taking the worst of it.&rdquo;

The Enterprise carrier ducked into a squall for protection and Beeman&rsquo;s ship was on the outside edge of the storm when he saw a Japanese kamikaze coming around the rear of the carrier.

Beeman, who that day was manning a 20 mm gun, took aim as the plane approached. &ldquo;I was holding my fire as long as I could. You only have 250 shots in a magazine, so if you start too soon you run out of shots and you&rsquo;re in trouble.&rdquo;

With the plane only about 300 feet out, Beeman fired a burst and the plane exploded.

&ldquo;The blast killed my two loaders and it tore me up pretty bad,&rdquo; Beeman said.

The explosion burned through Beeman&rsquo;s shirt sleeves, and pieces from the plane punctured his belly. After getting the wounds treated by a medic, Beeman said he asked to keep his injuries quiet.

&ldquo;We kept it a secret pretty much from the officers,&rdquo; said Beeman. &ldquo;They would have put me on a ship out of there. The medic thought I was nuts, but I didn&rsquo;t want to get off.&rdquo;

As he awaits word from the VA, Beeman said he still reflects on his time in the Pacific.

&ldquo;I&rsquo;ve seen guys just coming apart while under attack, but I was so stupid as a kid I thought we were having fun,&rdquo; Beeman said. &ldquo;I took a bad beating and was proud of it. But I never did get over the war.&rdquo;