Dempsey turns over reins of 1st AD to Robinson 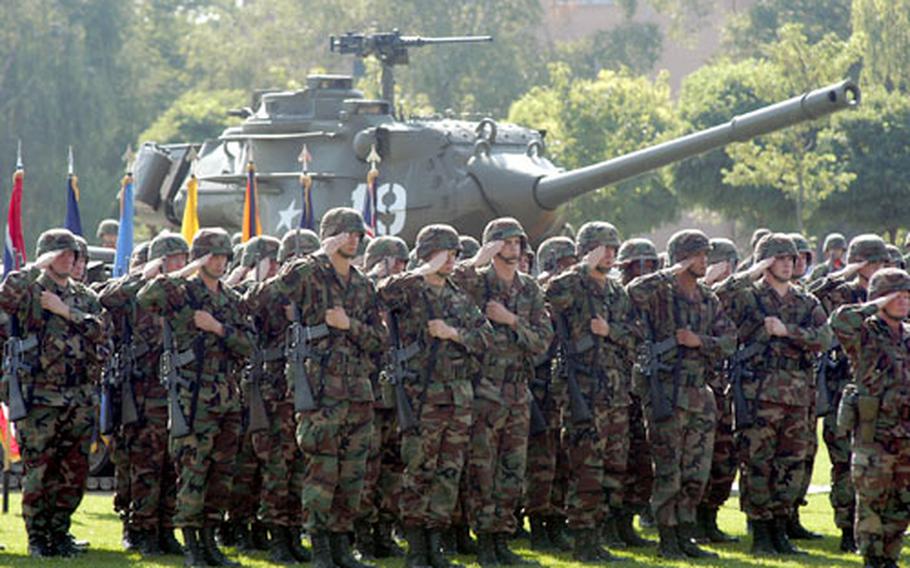 Soldiers of the 1st Armored Division salute during the playing of the national anthem at the division change of command ceremony in Wiesbaden on Wednesday. (Michael Abrams / S&S)

Soldiers of the 1st Armored Division salute during the playing of the national anthem at the division change of command ceremony in Wiesbaden on Wednesday. (Michael Abrams / S&S) 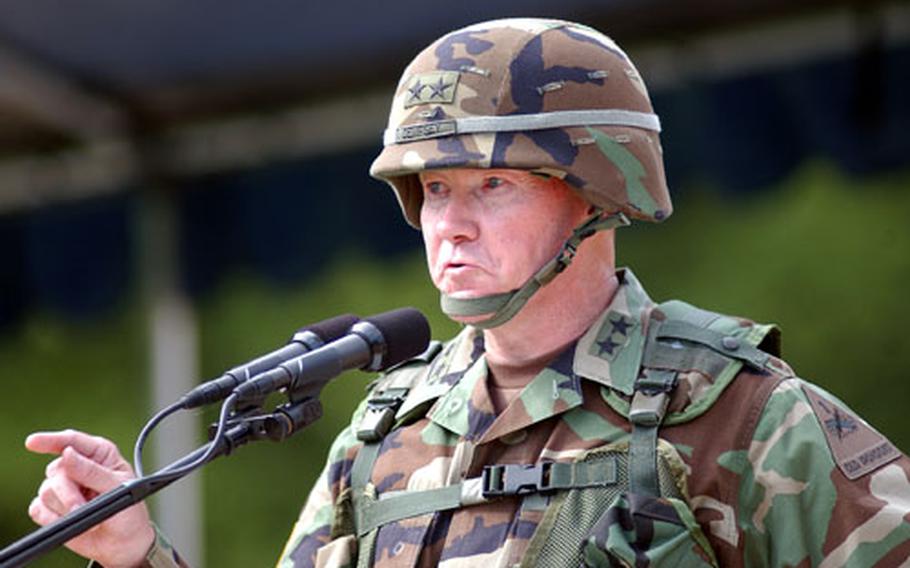 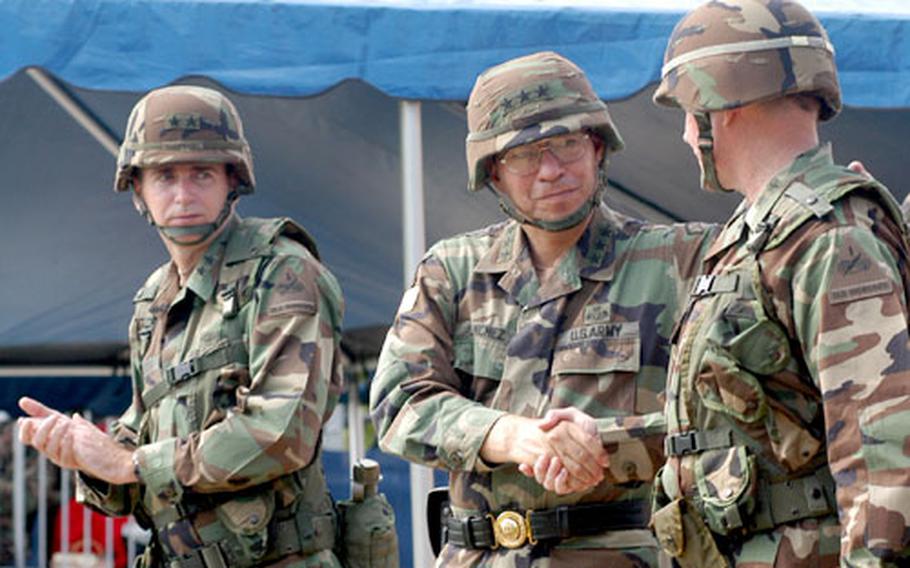 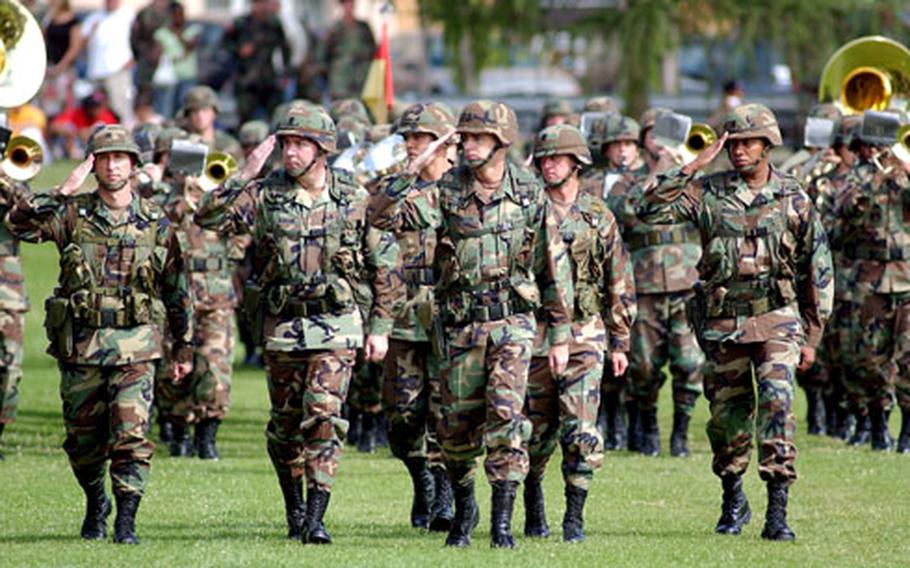 Maj. Gen. Fred D. Robinson, center, and staff of the 1st Armored Division salute as they pass in review at the conclusion of Wednesday&#39;s change of command ceremony. (Michael Abrams / S&S) 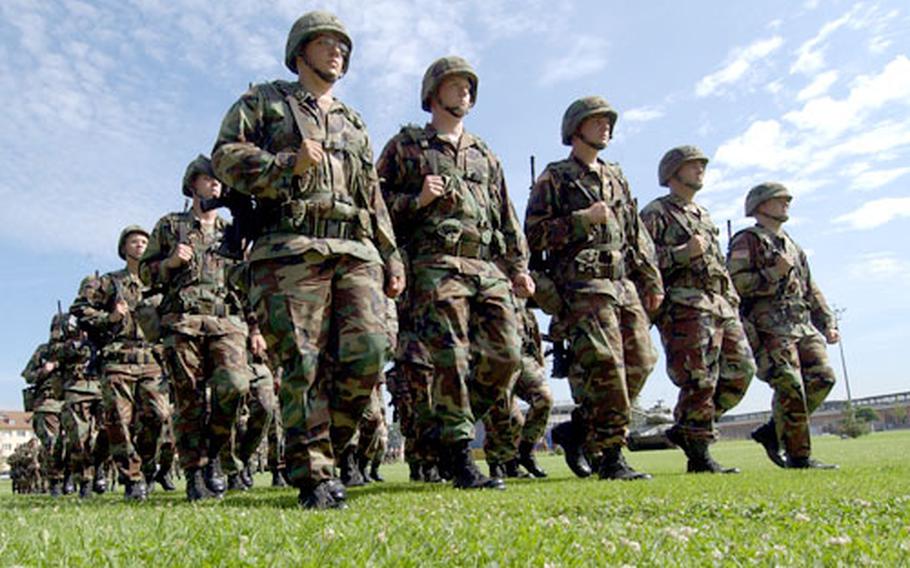 Soldiers of the 1st Armored Division march off the parade grounds at the end of the change of command ceremony. (Michael Abrams / S&S)

WIESBADEN, Germany &#8212; Two years ago, Martin E. Dempsey, then a brigadier general, took charge of the 1st Armored Division while standing in one of Saddam Hussein&#8217;s lavish palaces in Iraq.

Ironically, Robinson was the unit&#8217;s acting commander in Iraq for several weeks before Dempsey arrived in July 2003. Joining Dempsey and Robinson then and now was Lt. Gen. Ricardo S. Sanchez, the V Corps commander.

Dempsey, who is getting a third star, leaves Wiesbaden, where the division is based, to head up the Multi-National Security Transition Command-Iraq. The U.S.-led command spearheads the effort to train and equip Iraqi security forces.

&#8220;For two years, I&#8217;ve known you at war and at peace,&#8221; Dempsey said to several hundred 1st AD soldiers assembled on the parade ground for the change-of-command ceremony.

Dempsey spoke of the soldiers&#8217; character, courage and resolve, no matter if they carry &#8220;a rifle&#8221; or &#8220;carry a trumpet,&#8221; a reference to the 1st AD band. The subject clearly moved Dempsey, who knows that thousands of his soldiers are heading back to Iraq for their second deployment.

During the first deployment, which lasted 14 months, 130 soldiers assigned to the division&#8217;s task force died in Iraq.

&#8220;Like you, I vow never to forget those who spent their last moments on earth as Iron soldiers,&#8221; Dempsey said. &#8220;On one of their graves is an epitaph that captures the profound sacrifice each of them made.&#8221;

While the division&#8217;s headquarters staff is more or less staying put, its 1st and 2nd brigades are just months away from deploying to Iraq. The 2nd Brigade, based in Baumholder, is expected to leave in late autumn, while the 1st Brigade, based in Friedberg, is due to depart in early 2006.

Robinson was the assistant division commander for maneuvers in June 2003, when his boss, Sanchez, left 1st AD to take command of V Corps. Robinson was temporarily put in charge until Dempsey arrived to take over.

Since then, Robinson has been at the Pentagon working as the Army&#8217;s deputy chief of staff for operations, readiness and mobilization.

&#8220;One of the hardest things I have ever had to do was leave this division while it was in combat in Baghdad,&#8221; Robinson said, &#8220;but I watched from afar as you carried out your mission to standard and met every objective.&#8221;

Change-of-command ceremonies are often perfunctory affairs. Wednesday&#8217;s ceremony wasn&#8217;t, perhaps because of familiarity among the principals, perhaps because the division is heading back into a war zone.