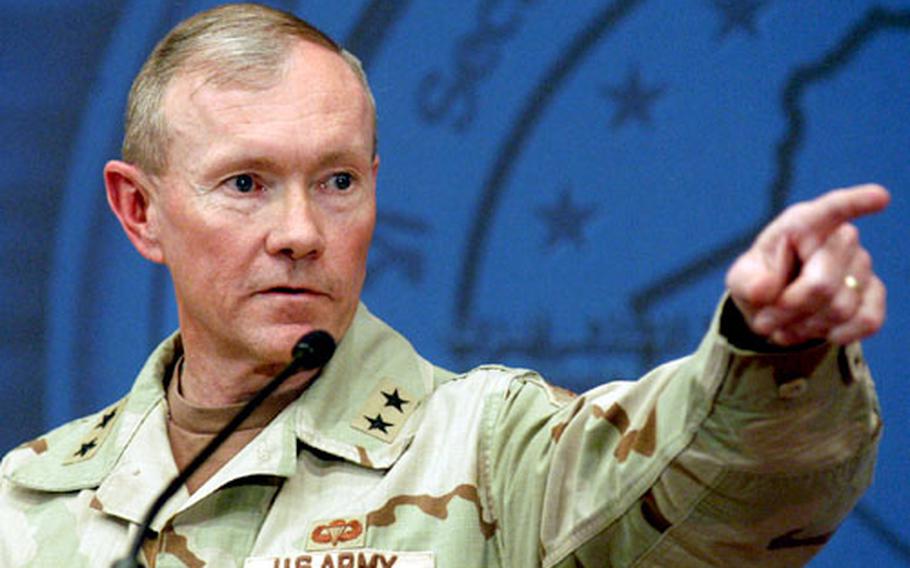 Maj. Gen. Martin Dempsey acknowledges that 1st Armored Division soldiers are being asked to stay in a combat zone longer than any U.S. soldiers have in half a century, but he said a change in mission should lessen fatigue and allow troops to refocus their efforts. (Michael Abrams / S&S)

When Maj. Gen. Martin Dempsey learned his 1st Armored Division soldiers would be ordered to stay and fight longer than any U.S. soldiers have in half a century, he asked for two things.

Dempsey got what he asked for. Sometime soon, the division&#8217;s two brigades, which are based in Germany but for the past year have more or less run Baghdad, will decamp. The city of 6 million will be the responsibility of the 1st Cavalry Division.

One brigade-size unit from 1st AD will head some 50 miles south to Babil Province to protect supply-line convoys that have been attacked and major highways that have been closed, and to battle &#8220;former regime elements.&#8221;

Some fighters there have tribal ties to Sunni insurgents in Fallujah, Dempsey said. The brigade will be &#8220;fighting a supporting effort to this larger fight to the west,&#8221; Dempsey said.

The other brigade will be the Ready First Combat Team in reserve, and deploy where needed. Dempsey declined to say exactly where that might be.

One regiment already has moved south &#8212; to Najaf, where coalition troops for more than a week have surrounded the city in which radical Shiite cleric Muqtada al-Sadr has holed up &#8212; and to other spots in the south-central region of Iraq. A multinational force of 9,500 soldiers has been stretched in that area, and Spain&#8217;s decision to pull its 1,300 troops out could exacerbate the problem. The regiment also is shoring up efforts to protect supply lines, Dempsey said.

Despite all the experience 1st AD has gained over the past year in Baghdad, Dempsey said that getting away from the city and changing missions will be beneficial, helping to lessen fatigue or frustration soldiers might feel as they extend past a year.

The pace of the past year has been &#8220;absolutely frenetic,&#8221; Dempsey said, and challenging in many ways. It can&#8217;t be compared to two-year tours in Europe during World War II, for instance, in which fierce battles alternated with long lulls, and battle lines were clearly marked.

Overseen by 14 colonels in different districts of the city, the troops under Dempsey&#8217;s command &#8212; 36,000 strong at its highest level last fall &#8212; went on hundreds of thousands of patrols, and performed an average of 50 offensive operations a week.

More unusual for an armored division, the soldiers also worked at city-building, renovating hundreds of schools, restoring hundreds of megawatts of power and recruiting thousands of police and security forces.

The division&#8217;s success was not without sacrifice. Asked about casualties, Dempsey knew the numbers by heart: 77 soldiers were killed in action over the past year, about half from roadside bombs and half from small-arms fire, he said. Thirty-one others died in accidents or from illness. Nearly 900 were wounded.

And the success has been, at the least, interrupted. The recent surge in fighting, as well as the kidnappings of scores of civilians, are the reasons 1st AD finds itself still in Iraq and not back in Germany as expected after a year.

But Dempsey said if insurgents had timed the attacks for later, after 1st AD had left, the situation would be more dire.

Dempsey said that although he expects 1st AD will be sent home within four months, the Pentagon has not committed to a certain date.

Dempsey said he feels much the same way about the soldiers&#8217; families.

&#8220;The steadfastness and perseverance of our family members allows us to pursue the mission without distraction. And here, distraction can be very dangerous,&#8221; he said. &#8220;I owe those families big time.&#8221;

Dempsey said in his 30-year career, he had seen no other U.S. soldiers required to stay in a combat zone for more than one year, including Vietnam.

The Pentagon has pledged to pay extended soldiers an extra $1,000 a month. There&#8217;s really only one other thing that can be done for them, Dempsey said.